Algeria very painfully detached itself from its colonial past in 1962. Despite Arabic culture and history remains the country of France connected, just because of the large number of Algerian immigrants in southern France.

But not only those who left keep the connection to France, but also the Algerians in Algeria seek contact Europe, especially in the tourist area. Because here there are sources of income that are not yet fully exhausted.

Many underestimate Algeria’s nature. The small proportion of forest quickly creates the impression that Algeria has little to offer in terms of flora and fauna. But this really is not the case. Today, targeted afforestation is being taken as a countermeasure. This supports sustainably supports the ecosystem. The aim of the afforestation is to counter the expansion of the desert. A forest stand of 2 percent was achieved through this afforestation. 10 years ago it was 1.3 percent.

This afforestation is not necessary in the northern part of the country. It rains enough here and shrubs such as Aleppo pine, cork oak and holm oak can thrive here.

In the animal kingdom there are still wild gazelles, desert foxes and mouflon. Marmots and the cheeky barbary macaques have also found their home here. The beautiful cheetahs are still found in algae, but you have to say that you can hardly see them. Snakes, lizards and scorpions mainly live in the hotter areas, whereas various birds and raptors can be found in the wetter regions of Algeria.

The occurrence of different climate zones in Algeria makes a landscape diversity possible: there are oases, steppes, forests and deserts. Everything can be found in Algeria, which is why this country is so attractive.

Even though Western influences are widespread and French is used as a communication language, visitors should keep in mind that Algeria is part of the Arab-Islamist world. On a trip to Algeria you have to be prepared that, with the exception of a few luxury hotels in Algiers, Algeria’s tourist infrastructure is underdeveloped. Travel in Algeria should therefore be prepared particularly thoroughly or entrusted to an experienced tour operator.

Nevertheless, Algeria is also a country for family trips. The journey by plane does not take long and can also be bridged by a few games for smaller children. The large hotels are all family-friendly (but there are also holiday apartments there) and, in addition to a pool, also have other amenities that children like to use.

Here is a list of the largest cities in Algeria.

Form of government Algeria is a presidential republic since 1,962 the new constitution has been in force since 1996. The bicameral parliament consists of a National Assembly with 389 members and the Council of the Nation with 144 members. Algeria has been independent of France since March 18, 1962.

Head of state: President Abdelaziz Bouteflika (elected for the third time since April 27, 1999, in April 2009)

Local time: CET. There is no changeover between summer and winter time in Algeria.
The time difference to Central Europe is 0 h in winter and -1 h in summer.

Algeria is bordered in the west by Morocco, in the southwest by Mauritania and Mali, in the southeast by Niger, in the east by Libya and in the northeast by Tunisia. The northern border is the Mediterranean.

Algeria is the largest country in Africa. The country takes its name from the capital Algiers, which in Arabic means Al-Djezair (island). In a figurative sense, Algeria is an “island” between the Mediterranean and the Sahara desert.

Algeria can be clearly divided into three parts: the Atlas Mountains in the north, the Ahaggar Massif in the south and in between the vast plains of the Sahara.

Here you can find a detailed topographic map of Algeria.

The northern part of Algeria, the actual habitat of the country, is occupied by the Atlas Mountains (with the Tell Atlas, the highlands of the Scottish Mountains and the Sahara Atlas), but the much larger southern part by the Sahara Desert.

Behind the narrow, bay-rich hem of the Mediterranean coast rises the steeply rising Tellatlas. The mountain range, divided by basins, longitudinal and transverse valleys, reaches an altitude of 2,308 m to the east of Algiers in the gorge-rich Kabylei. On its south side, the Tellatlas descends to the highlands of the Schott (391 to well over 1,000 m high), which has numerous drainless, swamped salt lakes, the so-called Schottts, inside. The Sahara Atlas, which runs in the south and runs parallel to the coast and the Tell Atlas, rises to 2,328 m.

The Atlas Mountains consist of rocks from the Middle Ages (limestone) and old pre-Cambrian rocks from the “African basement”, which forms the base of almost all of Africa. In the layers of rock deposited there are rich water and oil reserves.

The Algerian Sahara spreads south of the striking mountain descent (in the bulkheads of the eastern lowlands up to 35 m below sea level) ; it occupies 85% of the country’s area. A strip of desert steppe in the north connects to the extensive, almost vegetation-free sand dune areas of the Eastern and Western Great Erg, Erg Iguidi and Erg Chech. For the most part, however, the Sahara of Algeria is occupied by the plateaus of the stony Hammada and by stepped landscapes (Tassili n’Ajjer).

In the southeast, the Ahaggar massif, a desert-like high mountain range, rises in the Tahat (Algeria’s highest mountain) at 2,918 m. Here, in the tertiary, volcanism occurred, which created the Ahaggar massif. The movements in the earth’s crust continue to this day, which explains the frequent earthquakes in the region.

With the exception of the mostly short continuous rivers in the coastal region of the Tellatlas, the river valleys of Algeria are dry (wadis). Heavy rains – even in more distant areas – can turn them into torrents. The longest river in the country is the Cheliff.

The coastal vegetation in Algeria is Mediterranean, hardwood plants such as oleanders, laurels, myrths and olive trees dominate the picture. Some parts of the mountains are forested (evergreen oak, cork oak, cedar, Aleppo pine), otherwise the bushy maquis predominates. Halfagras shapes the landscape in the dry highlands. The desert is largely without vegetation.

There are also few differences from the other Mediterranean countries in terms of wildlife. The mountain sheep is common. Otherwise, formerly common animals, such as the Berber lion, have become extinct. Insects, scorpions, lizards, snakes, birds and a few mammals such as desert foxes or gazelles live in the desert.

This map of the population distribution in Algeria was created by the Worldmapper team. Densely populated areas appear bloated, the area of ​​sparsely populated areas is reduced. The shape of the grid has been preserved; an underlying map with the original geographical extent helps interpret the map. The distorted map should help to present abstract statistical information clearly. 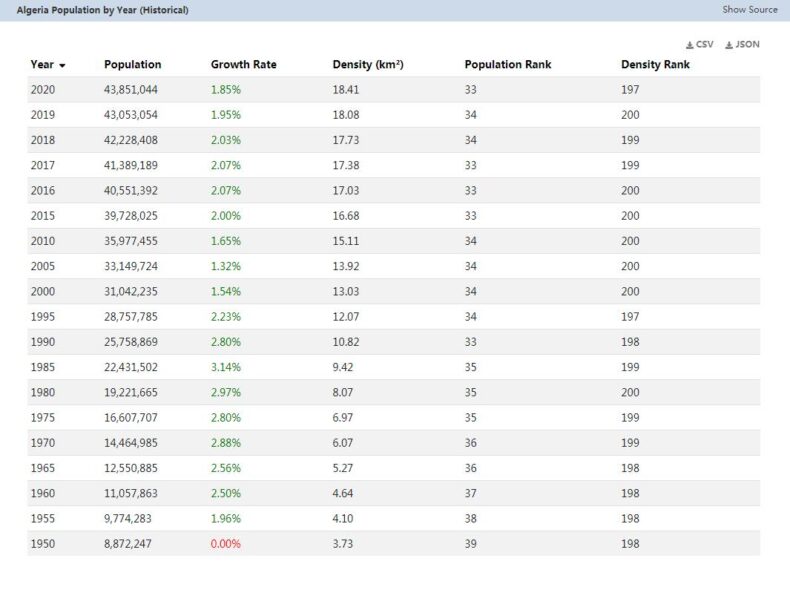