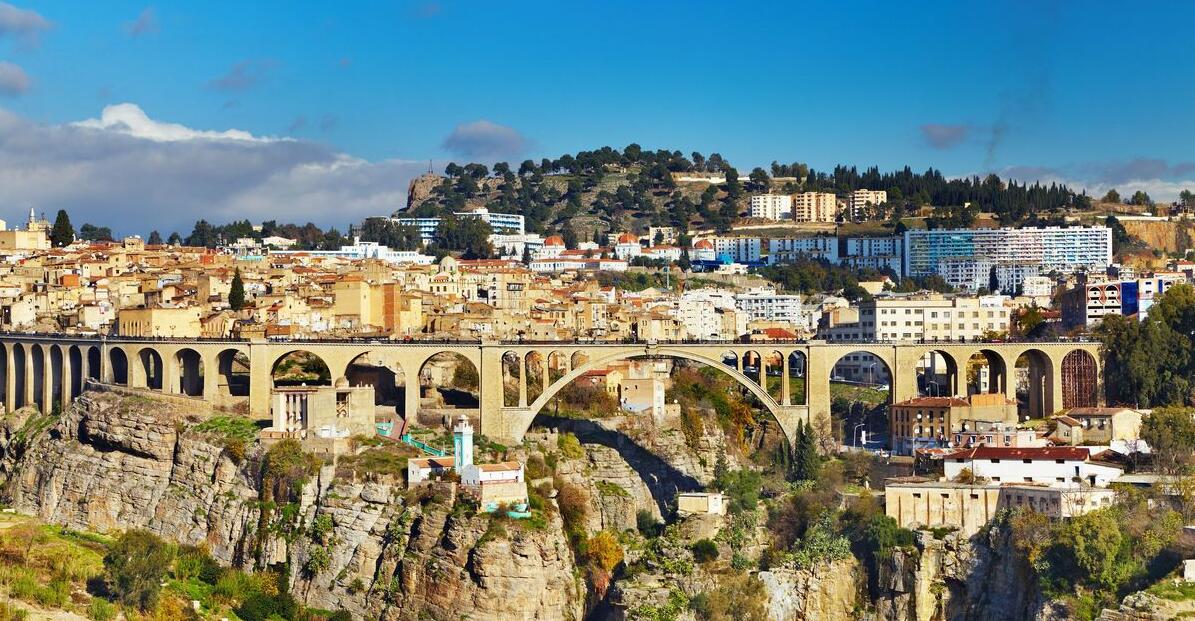 Algeria is a republic in North Africa. The country borders in the west to Morocco, Mauritania and Mali in the southwest, Niger in the southeast, and Libya and Tunisia in the east; to the Mediterranean along a coastline of 998 kilometers to the north.

Algeria is Africa’s largest country by far, but the southern four-fifths of the country is desert (Sahara) and both settlement and economic life are concentrated in the northern coastal and mountain zones. Official language is Arabic, tamazigh has been recognized as national language and French is widely used.

Algeria’s older history is particularly linked to Roman rule over areas that were then inhabited by the Berbers (Amazigh). Later immigration of Arabs from the east led to an Arabization and Islamization that has persisted. After three centuries of self-government under Ottoman rule, in 1830 Algeria was taken over by France, which gradually took control of the area that today constitutes modern state formation. Algeria became independent after the liberation war in 1962, and was the scene of civil war in the 1990s. Islam is state religion.

The name Algeria is taken from the city of Alger, which in turn derives from the Arabic al-Jazair, which means the islands, and refers to four islands outside the city, which later became part of the mainland.

Algeria is Africa’s largest and the world’s tenth largest in terms of area. The country consists of two main geographical regions: the coastal and mountain zone Tell in the north and Sahara in the south. A narrow, disconnected coastal plain separates the Atlas Mountains from the Mediterranean. The mountains reach their highest heights in Kabylia with peaks close to 2000 meters above sea level, and include Chelif Oued, the country’s longest river. To the south of the Atlas Mountains is the Sahara, with the Aurès and Ahaggar massifs. By far the largest part of the population lives in the coastal zone, with its Mediterranean climate.

Algeria’s nature – with vegetation and wildlife – varies greatly from the coastal strip to the desert. Forests cover only about two percent of the area, and are found in the coastal zone. Former forests have been cut down and replaced by shrubs. In the desert there are mostly hardy shrubs and grasses.

In the north there are several types of wild animals, including the berber monkey, several species of reef and golden jackal. Dorcas and atlas gazelles are found in semi-desert, mooring sheep in high desert areas, where there are hyenas and jackals. Bird life is rich and includes wintering migratory birds.

Algeria is sparsely populated, with the highest population density in and around the major coastal cities, especially Alger, Oran and Constantine. About 95 per cent of the population resides in the northernmost 10-12 per cent of the area. In the Sahara, only the oases are inhabited. Population growth is high and the population is young: 28 per cent are under 15; 46 per cent under 25 years. About 1.5 million Algerians are still living fully or partially as nomads. Practically the entire population is Muslims (Sunnis), with small Christian and Jewish minorities.

Circa 70 percent of the population are Arabs and about 30 percent Berbers (Amazigh). The former large European population has largely left the country. Most Berbers – the country’s original population – live in Kabylia in the north and Ahaggar in the south (nomadic Tuaregs). Most Algerian Arabs are of Berber descent. There is also a significant minority of Algerians of Turkish descent – from the time under Ottoman rule. Millions of Algerians live abroad as guest workers, most in France. 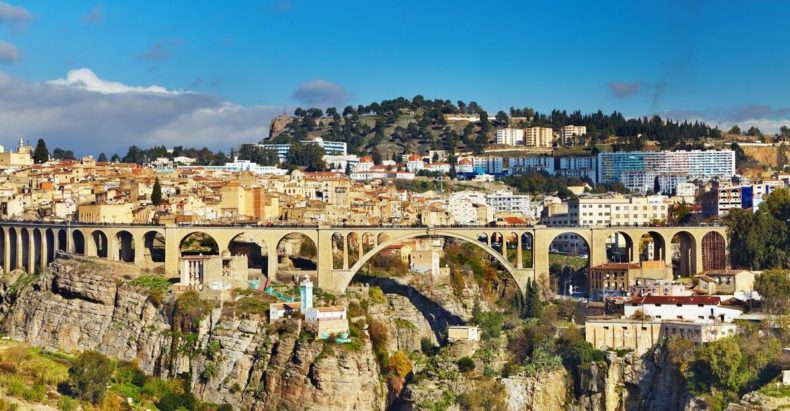 Algeria as a state was created as a result of French colonial rule from 1830. Prior to this, parts of the later state had been brought together under Ottoman rule. The Democratic People’s Republic of Algeria was proclaimed after independence in 1962. Thereafter, the country was for a long time a one-party state led by the state-carrying – and until 1989 only allowed – party, the former Liberation Front National Liberation Movement (FLN). After a political liberalization in the late 1980s, elections were won by Islamists, then military rule was introduced and Algeria was thrown into civil war.

Both parliament and president are elected, and from the late 1980s several parties and candidates are allowed. The office of president is conferred considerable power – and the president appoints the prime minister. Parliament consists of two chambers, of which the National Assembly is composed as a result of universal suffrage.

After pursuing an alliance-free, radical policy based on socialist ideology during the first decades of independence, political and economic liberalization has taken place. The state of emergency was abolished in 2011, but there are still restrictions on freedom of expression and organization.

Algeria was not covered by the Arab Spring in 2011–2012, but in the winter of 2019 popular protests came here as well. The main requirement was that President Abdelaziz Bouteflika should not stand for re-election.

Algeria has a history of traces of human presence some 1.8 million years back in time. In the Stone Age, several peoples migrated into North Africa, becoming what is considered Algeria’s original population: the Berbers (the Imazighen). Later Algeria was in ancient times in an area the Greeks called Libya, and Romans called Africa. The greatest influence on the development of later Algeria had the Arab conquest in the 7th century; then the Ottoman regime from the mid-1500s – when Algeria was a self-governing area.

Modern Algeria gradually came under French rule, from 1830. The French invasion ended the rule of the Ottomans (Turks) – and the lucrative piracy. France made Algeria a settler colony, with extensive immigration from Europe, and it was more or less self-governing. Several revolts were turned down. The colonists (colonies) opposed the equal rights of the Muslim population, and an armed liberation struggle began in 1954. The war led to independence in 1962.

Algeria is rich in natural resources, above all oil and gas. Already under Roman rule, the country was an important producer of food, and agriculture was the most important trade route even during the French colonial period, when large plantations were established, including for the production of wine.

Oil recovery in the Sahara began in the late 1950s; Gas exports began in 1965. Algeria is one of the world’s leading producers and exporters of both oil and gas. The country also has rich deposits of several other minerals.

Algeria was depleted after the liberation war, and by independence large parts of the economy, including the infrastructure, were destroyed. As a result of rising oil prices in the early 1970s, Algeria launched a comprehensive industrialization program, with investment especially in heavy industry. The state was then the most important player in business. Liberalization from the late 1980s has encouraged private entrepreneurship as well as foreign investment. At the same time, increased emphasis was placed on small industry development. High unemployment is one of Algeria’s biggest social and economic challenges.

Algeria is part of the Arab culture, while the country has its own cultural roots rooted in both the Berber culture and the experiences of colonialism and the liberation struggle. The close association with France, both during the colonial period and later, has also characterized Algerian cultural development.

Algeria has educated several well-known authors, including Nobel laureate Albert Camus. Among several who have taken motifs from the liberation match are Frantz Fanon and Kateb Yacine. Algeria also has its own forms of music, including the genres chaâbi and raï. Film is also a central form of expression. The country has an extensive, and relatively free, press.

Following independence, Algeria has developed a modern education system with services for the entire population. Elementary school became compulsory as part of raising reading and writing skills, and from 1972 Arabic was made into teaching language. French is partly retained in higher education. The education system is built on the French, with primary, secondary and tertiary education, which concludes with a baccalauréat – examination. Algeria has 26 universities, and over a hundred other colleges. With the exception of private institutions, education is free.

Algeria has had, and has, limited bilateral relations with Norway. Historically, in the Danish era, Norway became acquainted with Alger through pirates who hijacked Danish-Norwegian ships and made the crew slaves. In modern times, contact is political and economic, not least because the two countries are both significant petroleum producers. Norway established its own embassy in Algiers in 2007.

Some Norwegian companies have established themselves in Algeria, including Equinor (formerly Statoil), which since 2003 is part owner of the two gas fields In Salah and In Amenas in the Sahara. In 2013, the latter was attacked by terrorists belonging to al-Qaeda’s North Africa Group (AQIM), and five Norwegians were among the 39 killed. Norway then offered to send Norwegian special soldiers to contribute to the action against the terrorists, but this was rejected. Norway, on the other hand, sent a sanitation capacity.