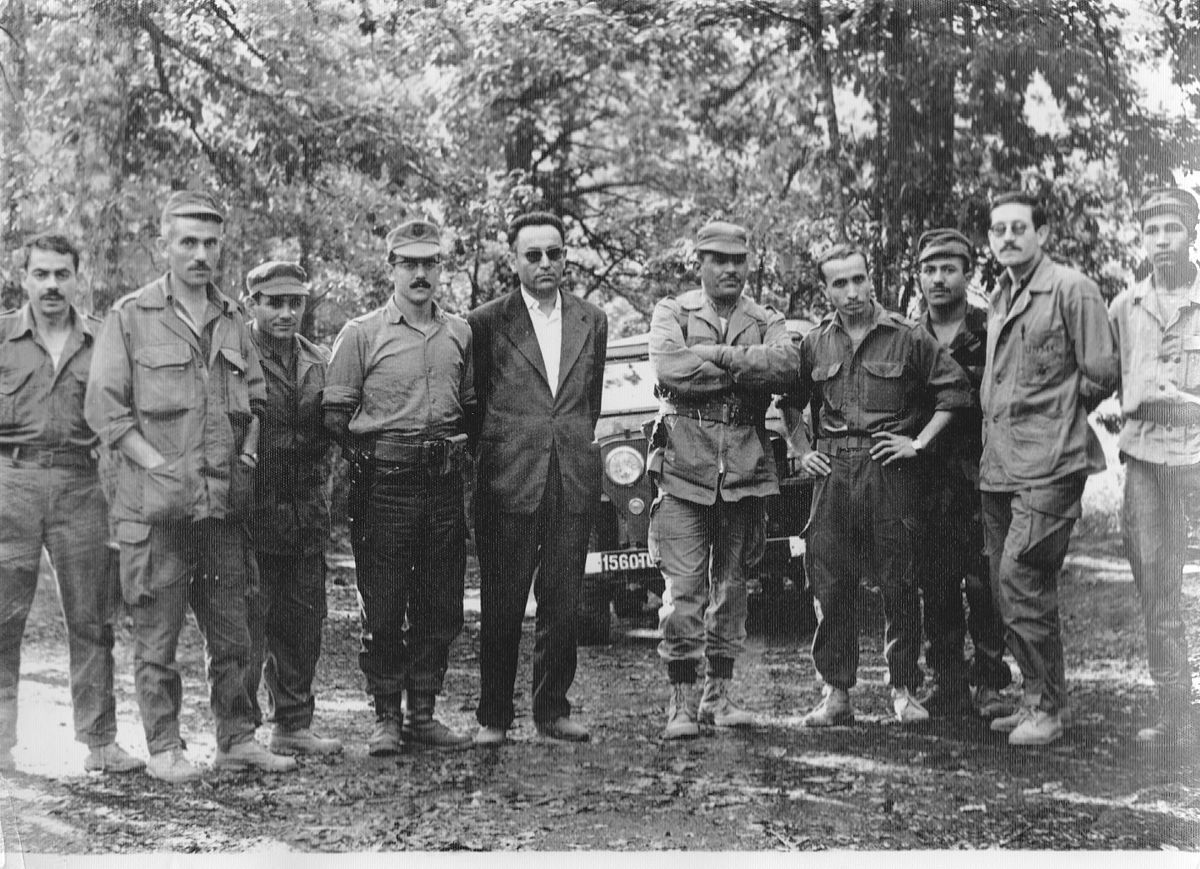 Algeria’s contemporary history is the story of the country’s independence on July 5, 1962, following an eight-year liberation war. After negotiations between the colonial power of France and the Algerian Liberation Movement Front de libération national e (FLN), independence was accepted by an overwhelming majority of the people in the referendum.

Despite guarantees, the independence led to about four out of five Europeans leaving the country shortly after. At that time, some 800,000 Europeans lived in Algeria. Among these were a large part of the country’s technicians, administrators and teachers; few Algerians had received higher education. The settlers sabotaged much of the infrastructure and contributed to further deterioration of Algeria’s economic situation at the start of the independence period, on top of the widespread devastation caused by the war.

At the same time, a political divide within the nationalist movement threatened to throw the country into civil war. Three decades later, Algeria ended in civil war, after Islamists got a majority in elections, but were prevented from coming to power.

The peace negotiations in Evian in France led to an agreement on ceasefire and independence. The agreement was signed on March 18, 1962, and initiated a process that led to Algeria becoming an independent state on July 5, 1962. By then, 99.72 percent of Algerian voters had supported independence through a July 1 referendum, where France announced its independence 3 July. 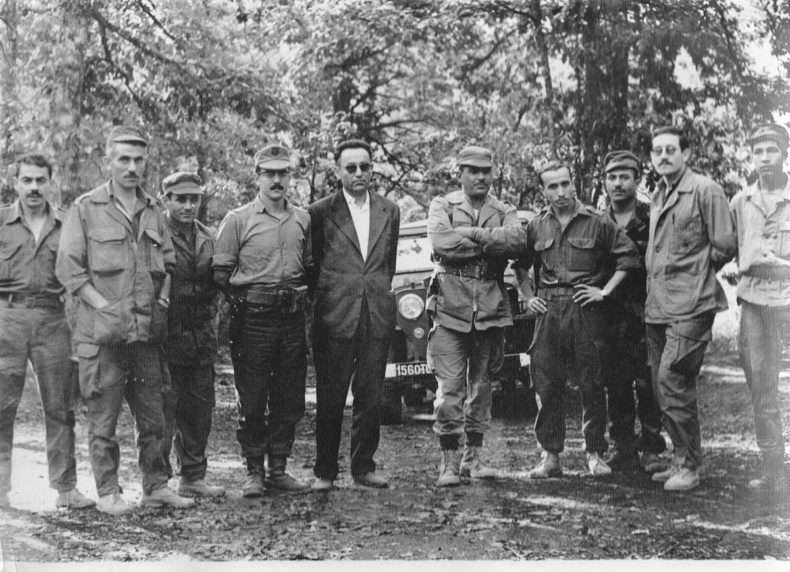 Photo by several prominent Algerian politicians and military in 1961, a year before the country became independent. Chadli Benjedid (President 1979-1992) on the far left.

As a result of the Evian agreement, a provisional steering board was established, with Abderrahmane Farès as the leader. By independence he became Algeria’s first head of state, while Benyousef Ben Khedda became the first prime minister. In the election of the Constitutional Assembly in September 1962, FLN, as the only party that voted, received 99.7 percent of the vote. Then Ferhat Abba became the new head of state and Ahmed Ben Bella new prime minister.

Contradictions within the nationalist movement emerged early, partly between more moderate versus more radical forces in the FLN and partly between those who had led the liberation war inland and those who had been in exile leadership. At the same time, military leaders were asserting, and the political struggle threatened Algeria with civil war, and mass demonstrations against a new war ensued. Civil war was avoided, although fighting ensued when the army rebelled. This happened in Kabylia, among others, where Hussein Ait Ahmed led the Front des forces socialistes (FFS).

Settlements also took place between rival groups, and there were revenge actions against Algerians who had supported the French government. Thousands were killed in these settlements, including many Frenchmen. In 1963, military talks with Morocco claimed a land area west of Algeria, the so-called “sand war”.

In the internal power struggle in FLN, Ben Bella strengthened his position through the support of Army commander Colonel Houari Boumedienne. His forces (the Liberation Army ALN) captured the demilitarized Algiers on September 10, 1962, prior to the election that made Ben Bella prime minister. Then Ben Bella was elected President in September 1963, at the same time as the Prime Minister’s post was removed. He retained power until he was deposed in a coup – implemented by Defense Minister Boumedienne, who subsequently succeeded him – in June 1965.

Boumedienne and the army leadership deployed a military regime, dissolved the National Assembly and set aside the Constitution. He himself became head of state, in the leadership of a revolutionary council that replaced the government. Several coup attempts against the new regime, and attacks on Boumedienne, were launched, which gradually consolidated its power. The military became the new power base, although the FLN still held a central position (from 1963) the country’s only permissible political party and ideological impetus. In 1976, Boumedienne was formally made president, after being elected – without a counter-candidate.

Under Boumedienne, Algeria emerged as a radical, socialist country. The ideology was an independent socialism inspired by, among others, Egypt under Old Abdel Nasser, and rejected both doctrinal Marxism and communism. The policy entailed, among other things, major reforms in agriculture and investment in industrial travel. The country became an active player in the international anti-imperialist struggle, and supported several liberation movements in Africa. Land reform helped divide land use and landless small farmers got land; so-called socialist villages were also established. French property was nationalized in 1963.

The growing revenues from oil and gas extraction, nationalized in 1971, enabled extensive investment in industrial construction, and Algeria received one of the highest national product and average revenues in Africa. Furthermore, a lot of investment was made in education. Equally, there was high unemployment, and extensive labor migration to France; money transfers from migrant workers became an important source of income.

The national charter ( Charte nationale ) which was adopted in a referendum in 1976 pointed out the further direction of the socialist state. When Boumedienne died in 1978, however, much of this policy was changed. Colonel Chadli Benjedid was elected by the FLN as the new head of state, following pressure from the military, and as a compromise candidate after the power struggle in FLN. He became secretary general of the party and elected president in 1979.

Chadli implemented several reforms, liberalizing the economy, encouraging private business and opening up some foreign investment. Foreign policy orientation turned from the Soviet Union, towards the West. In October 1988, there was extensive social unrest with riots in several places in the country. These were essentially aimed at deteriorating economic conditions, including increased food prices and rising unemployment, but also against the lack of political freedom. The uprising was turned down and between 200 and 500 people were killed. In 1980, the so-called “Berber Spring” erupted in Kabylia, with ethnically based violent protests targeting Arab politics.

The more moderate and pragmatic line also led to the release of several political prisoners, including Ben Bella. Amendments to the Constitution were approved in a November 1988 referendum, after which Chadli was re-elected president in December. A new constitution was passed in a referendum in March 1989. This led Algeria away from socialism as a stated ideological basis, and opened to democratic governance.

For the first time since independence, Algeria held free local and regional elections in June 1990 with the participation of more than one party. This democratic development in Algeria was the most far-reaching in the Arab world, and was closely followed by other states in the Middle East and North Africa, not least Algeria’s two neighboring countries Morocco and Tunisia. One of the reasons for the great interest in the Algerian election was the strong position radical Islamic forces had won in a crisis-affected society. Eleven parties voted in the local elections, where Front Islamique du salut (FIS) won control over most municipal councils and regional assemblies. With 54.3 percent of the vote, FIS was the largest in 853 of a total of 1,500 local councils; FLN gained only 28.1 percent.

The first free elections at the National Assembly were to be held in June 1991, but were postponed following violent clashes between police and supporters of the FIS. The president dispatched the army to restore order, introduced a state of emergency and postponed the December elections.

At the first round of elections, FIS won a clear victory, ahead of Front des forces socialistes (FFS) and FLN: FIS gained 188 seats, against only 16 for FLN, while FFS gained 26. A total of 49 parties participated. The election was two-fold, and ahead of the second round, in January 1992, the starting point was that the FIS needed only 28 more seats to get a pure majority in the National Assembly.