Algeria’s recent history is about the time when the country was subjugated to the Ottoman Empire from the 16th century, further the French government from 1830, and until the country became independent in 1962.

Algeria and Maghreb came under Turkish rule as part of the Ottoman Empire in the 16th century, after several centuries of Islamic rule and Arabization. Algeria was formally placed under the Turkish Sultan as an Ottoman province.

The whole country had at that time become part of the Arab and Islamic cultural circle; only in a few parts of the country did more isolated people, such as the Kabuls and Tuaregs, live outside the new order. With the entry of the Ottomans, Turkish became official language, and Berbers as well as Arabs were excluded from public positions.

In the first half of the 16th century, Ottoman expansion was challenged by Spain, after Christian forces took final control there in 1492, and pursued from 1496 refugee Moors into North Africa – through Algeria to Tripolitania in the east. The Spaniards established several military parties in Algeria early in the century, including in Oran (1509) and Alger (1510).

The advancement of Christians in the Muslim Maghreb helped give the Muslim Ottomans control over northern Africa, having first occupied Egypt in 1517. Turkish corsairs helped establish the military and political control over Algeria.

In the Ottoman period, Algeria was in practice autonomous as the government of Alger (The Regency of Algiers), established from 1525. A local ruler (dey) of Turkish descent, was governor of Algeria – and ruled by an Ottoman administration. Local government was exercised through governors (pasha) governed by the dey, who ruled as monarchs, with the support of a council (diwan) of five high-ranking Turks. Deyen was in contact with the central power in Istanbul, but this had little influence in Maghreb.

The Ottoman possessions in Algeria were divided into four provinces: Alger (Dar al-Sultan), which was directly below the dey, and three beyliks, Constantine in the east, Oran in the west and Titteri in the center – all ruled by a bey. The provinces were far from self-governing; so were administrative units and cities within these. The centralized power was primarily concerned with tax revenue, which was brought to the dey, and the Ottoman government was mainly concentrated on the economic exploitation of the subordinate population.

Despite several rebellions against the foreign regime, the Ottoman rulers retained control of the country. At the same time, Alger became the center of Turkish rule in Maghreb, substantially west of Tunisia. Through the Ottoman regime, a larger part of the future Algeria was brought together within defined boundaries.

A later Turkish admiral, Hayreddin Barbarossa (Khizr Reis; Khair ad-Din), helped to secure Ottoman control of the Mediterranean. Based in Tunisia, he fought with two Spanish brothers in Algeria (1516). Brother Aruj Baba Oruç proclaimed to the Sultan of Alger. The brothers incorporated the area into the Ottoman Empire, their homeland, as protection against Spain in 1517, with Aruj as governor. When he died in battle with the Spaniards during the Battle of Tlemcen in 1518, Khizr Reis took over and recaptured Tlemcen with the support of Ottoman forces.

The Spaniards recaptured, with Italian help, Algiers for a brief period in 1519, but were defeated by the Ottomans. Barbarossa then took control of the city in 1525, and was supported by an Ottoman garrison with around 2,000 Turkish soldiers. In the following years he attacked French and Spanish cities, and Spanish ships; then Italian and Greek goals – an introduction to a period of growing conflict over trade interests, with piracy and slave trade.

A Spanish attempt to recapture Algiers in 1540 fails. Ottoman control was significant over the coastal areas and did not include Kabylia. Barbarossa’s son, Hasan Pashan, was in 1544 the first governor of the government directly appointed by the Ottoman Empire, with the title of beylerbey, and Alger became a base in the war against Spain. After a formal peace was reached between Spain and Turkey in 1580, Alger formally became an Ottoman territory, led by a pasha.

Algeria’s population at the end of the Ottoman regime in 1830 is estimated at about three million. In addition to the original Berber population and the immigrant Arabs, the country gained a smaller Turkish population, as well as an influx of Moors and Jews. These were of low status, and were substantially engaged in crafts and commerce. Foreign trade was eventually mainly driven by Jews who had immigrated from Italy and who also operated banking services, thus gaining a central economic function – especially after the decline of the piracy business and the subsequent economic crisis in the early 1800s. 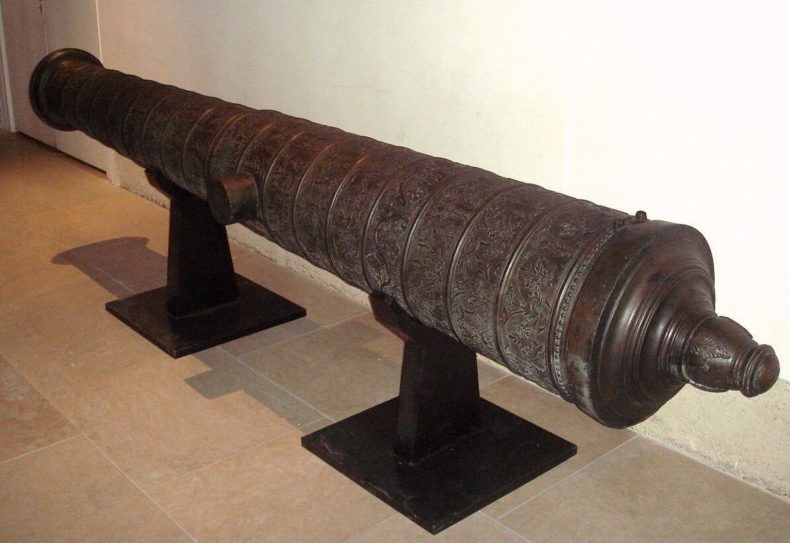 Ottoman canon from the late 16th century, used when the Turks conquered Algeria.

Algeria was in fact independent within the Ottoman Empire, and the local rulers therefore also controlled the lucrative piracy, which was widespread especially in the Mediterranean in the 17th and 18th centuries. Both hijacking and trade taxes were an important source of income for the rulers of the so-called barbaric states – Morocco, Algeria, Tunisia and Tripolitania (Libya). The European states charged significant fees for allowing merchant ships unobstructed passage, and otherwise went for hijacking. Pirates (corsars) both arrested ships in the Mediterranean, hijacked the cargo and kidnapped the crew – and they attacked cities in Europe to rob values ​​and take slaves through so-called raids.

Piracy was an important source of income, and Alger was the foremost of the hijackers. European states signed agreements with the dey and established diplomatic representation in Alger. Among these were Denmark-Norway, which was also active in sea trade through the Mediterranean. Disagreements between the states led to attacks on merchant ships, which were hijacked and brought to Algiers or other port cities.

Unless ransom was paid, captive crews were sold as slaves – also many Danes and Norwegians; an estimated a few thousand. It is estimated that over one million Europeans were captured and made slaves, from the 16th to the 19th centuries. Seen with European eyes, the hijacking business was piracy ; with Muslim eyes, it is also explained as a form of jihad – holy war – against unbelieving Christians, especially Catholics.