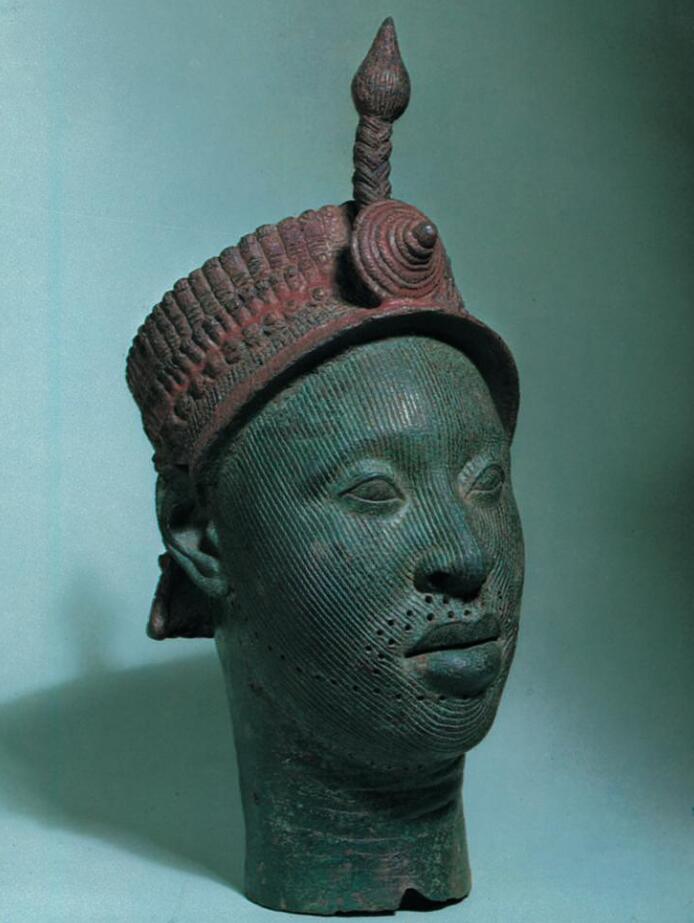 The oldest works of art known from present-day Nigeria are stylized terracotta figures, especially in the form of human heads, found on the Benue Plateau in central Nigeria. These figures stem from enough culture, an advanced Stone Age culture that flourished in the period ca. 500 BCE. The 200 CE sculpture of the Nok culture has probably given impetus to the art tradition that created the famous bronze and terracotta heads in Ife and Benin.

From the 1100s, the influence of Islamic art and culture became progressively stronger in Northern Nigeria, which was reflected, among other things, in the geometric embossed ornament of the Hausa, where Arabic models have been adapted locally. The Hausas are also known for outstanding leatherwork, gold and silversmithing, weaving and embroidery.

People groups in central and eastern Nigeria developed a high quality sculpture; Among these cultures’ foremost products are the richly decorated masks which, in addition to the wearer’s head, often cover large parts of the upper body. It is partly ceremonial masks, which indicate the wearer’s social rank, and partly ritual masks, which are used especially by members of “secret societies”.

The Yoruba developed a strong naturalistic sculpture as early as the 12th century; many of the works preserved were originally portraits of members of the royal family of Ife. Up to our own time, however, the sculptures of the Yoruba have also become more stylized, while the decorative details have gained a wider space, especially in the form of geometric ornaments.

European painting was introduced to Nigeria in the late 1800s, first through cheap reproductions and illustrations in magazines, religious literature and more. Aina Onabolu (1882–1963) is considered the first Nigerian artist to paint in a Western inspired style. He emphasized anatomical details, used light and shadow and a strictly linear perspective. His portrait Mrs. Spencer Savage is considered a major work in modern Nigerian painting.

In the 1920s Justus Akeredolu made wooden sculptures in a realistic style, popular motifs were Mother and child. His main sources of inspiration were European religious sculpture and photography, but he was also conscious of Nigeria’s own sculptural traditions. He designed the so-called Thorn sculpture, which was later vulgarized for the tourist market.

In the 1930s, British Kenneth Murray encouraged painters to reproduce their own environments. In the 1940s and 1950s, Akinola Lasekan (1916-72) introduced genre painting in Nigerian art. He was also the country’s foremost political figure and actively opposed the British colonial rule.

Ben Enwonwu (b. 1921) was the country’s leading sculptor in the 1950s. One of his earliest works was the statue of Elisabeth 2 in the parliament in Lagos, executed in a naturalistic ibo- inspired style. The form of expression became more stylized, his sculptures in wood, metal and bronze are characterized by African traditions.

The Zaria Art Society was established in the late 1950s. Among the group’s foremost artists were the painter Uche Okeke (b. 1933) and the painter and sculptor Demas Nwoko (b. 1935). They blended elements from older and newer traditions in a modernist style. With the establishment of the Zaria Art Society, the terracotta sculpture gained a renaissance in Nigerian art. Demas Nwoko’s sculptures are influenced by the terra-cotta figures in form and technique, but had relevant themes.

Felix Idubor is known for his smooth ebony sculptures, but his most important works are a number of carved doors in public buildings, and statues such as Mother Africa. In the Oshogbo workshops in Western Nigeria, ritual sculptures were created in the 1960s in an unpretentious style, which united an expressionist tendency with modern sculpture from Zimbabwe (so-called Shona). The art of painting is characterized by spontaneity, and is inspired by both primitivism and expressionism.

From the 1980s a number of younger artists worked in a bold and distinctive style. Older traditions such as wood-panel sculpture were renewed, and graphic and plastic art was mixed. Bruce Onobrakpeyas (b. 1952) developed a gravure printing technique, plastograph, made in epoxy and linoleum. He is considered by many to be the country’s foremost graphic artist; his work was selected to represent Nigeria at the Venice Biennale in 1990.

During and after the Civil War in 1967-70 propaganda art was created in a straightforward and direct style. This trend was continued by the artists of the Nsukka school. In the 1970s, three trends were visible in Nigerian painting: the Oshogbo School’s nativism, genre painting, and the Nsukka School’s social realism.

The Nsukka school also rediscovered and further developed the residents’ body and mural paintings. The new direction was called ulism, and is characterized by delicate lines and shapes and the use of symbolic and decorative motifs. Among the leading performers of the direction are the painter and graphic artist Uzo Egonu, Nigeria’s most famous artist abroad. Ulism and the social and political art of the Nsukka school are perhaps the strongest trends in Nigerian painting towards the end of the 20th century.

The originality and vitality of Nigerian sculpture from the 1990s is well represented by Obiora Anidi (b. 1957). He uses everything from metal pieces, steel wire and concrete to marble in his works, known for his elegant stylizations of human figures.