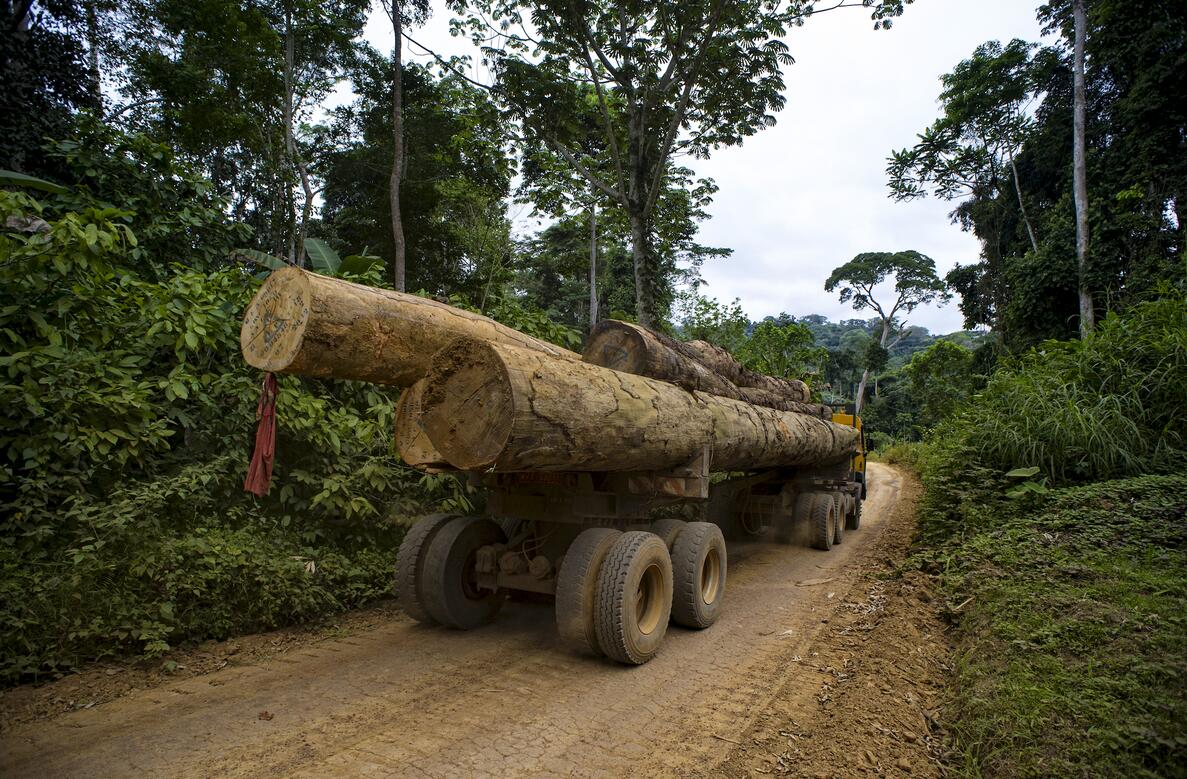 Cameroon is a republic on the west coast of Africa, at the bottom of the Gulf of Guinea. The country borders Nigeria in the west and northwest, Chad in the north and east, the Central African Republic in the east, and the Republic of Congo, Gabon and Equatorial Guinea in the south.

The population is estimated at 24,678,000 inhabitants (2018), with a number of different groups of people, a total of about 200, the majority of whom are dietary speakers.

Crude oil exports have made Cameroon one of the economically better-off countries in tropical Africa. However, agriculture is still the most important trade route, with the cultivation of coffee and cocoa. Other important export products are tropical timber, palm oil, rubber and tropical fruits.

Cameroon is often referred to as an “Africa in miniature” because of its location in the middle of Africa, with its varied geographical zones and climatic conditions, its many languages ​​and different peoples.

The name Cameroon (Cameroon / Cameroon) is of Portuguese ‘shrimp’ (camarão). This is after the name given to one of the rivers (Rio dos Camarões) by the area’s first Europeans because it was full of shrimp. The river has now been named Wouri.

Cameroon extends from the Gulf of Guinea in the south to Lake Chad in the north. The coastline along the Gulf of Guinea is approximately 300 kilometers long. Within the 15–25 kilometer wide coastal plain lies a broken plateau landscape, 300–400 meters above sea level. The plateau rises to the north up to 1000–2500 meters above sea level, with the Adamaoua plateau at its highest. North of the plateau landscape, the terrain is rather down towards Lake Chad.

To the west lies a belt of volcanic mountains and hills, extending from Mount Cameroon (the country’s highest mountain, officially 4095 meters above sea level) to the south and further north into the Adamaoua Plateau.

Cameroon has many rivers, including Chari and Logone (boundary rivers towards Chad ), which flow towards the Chad Sea in the north, Dja and Boumba in the southeast that flow to the Congo Basin, Benue in the north which flows to the west and flows into the Niger River (in Nigeria ), and in southwest Wouri, Dibamba, Sanaga and its tributaries Mbam, and Nyong, which flows towards the Gulf of Guinea. Sanaga is the country’s longest river.

The country is just north of the equator, and the climate is tropical with rainy season in the summer season and with warm, dry and dusty desert winds from the north in the winter season (harmattan).

Cameroon has a population of 24,678,000 inhabitants (2018) over a land area of ​​466,050 km², giving a population density of 53 inhabitants per km². According to official statistics, Cameroon had an urbanization rate of 52 percent in 2010. This means that just over 11.5 million people lived in cities, about half of them in the two largest cities of Douala and Yaoundé, while around 10.7 million people lived in rural areas, with a large proportion of these living in the northern part of the country.

The rainforest in the southeast is populated by pygmy tribes, living under pressure from the extraction of timber and other modern developments.

Cameroon is officially bilingual. The school is taught in both English and French. French still dominates as a public language, which is further manifested by the fact that the capital Yaoundé is located in the French-speaking part. Assuming completed primary education, this means that everyone in Cameroon will in practice master at least three languages ​​to a greater or lesser extent: an African mother tongue and French and English.

Many people in Cameroon still have a great faith in traditional gods and spirits. However, official statistics on religious affiliation say that about 70 percent of the population is Christian, about 20 percent are Muslims, and that only about 5 percent practice traditional religions.

Administratively, the country is divided into ten regions (former provinces). These are governed by a governor appointed by the president and subject to a governmental department of territorial administration. Each region is again divided into ministries (as in France), and on a national basis these make up a total of 58 ministries. Cameroon is therefore to a large extent a centrally governed country with relatively little local governance. This is probably also a legacy of the French colonial era, as the country was ruled directly by French officials, unlike indirect rule via local African chiefs, as was common in English colonies in West Africa. As in other former French colonies, therefore, great emphasis was placed on assimilating the population into French language and culture. This has caused a lot of irritation and uproar in the English-speaking part of the country, which from around 2017 has given rise to a civil war-like situation between the government army and local separatists fighting for an independent Ambazonia.

The defense is also built on the French model, with a relatively modest staff, but with an extra paramilitary force (gendarmerie) and a paramilitary guard force for the president (Garde presidential). With defense agreements between Cameroon and France, the Yaoundé regime can rely on French reinforcements if needed.

Cameroon is a member of the UN and UN special organizations, including the World Bank ; by the World Trade Organization, the African Union and the Cotonou Agreement, etc.

The first people to populate the area that later became Cameroon today were pygmy tribes, possibly from as far back in time as they were around 50,000 years ago. For thousands of years, these tribes were subjected to population pressure both from people arriving along the coast, from Arabs, and later from Muslim people from the north, and from Bantu people from Congo in the southeast. The Pygmy tribes were therefore gradually relegated to the rainforest in the southeastern parts of Cameroon.

Along with immigration and trade caravans through the Sahara Desert followed the development of agriculture and animal husbandry which helped to transform society from the emphasis on hunting and fishing to more modern settlements; a development that is believed to have been completed from around the year 1000 AD.

In northern Cameroon south of Lake Chad, Sao culture was a significant community from around 600 years BCE. for around 1500 AD.

Just south of the Sao community, in the area around the Mandara Mountains, the Mandarin Empire grew from around the year 1500 CE, but few details are known about the structure of this community.

The first significant contact with Europeans came with Portuguese seafarers arriving on the coast of Cameroon from 1472. Initially, this involved superficial contact which gradually increased to include widespread trade, including slave trade – a trade that continued uninterrupted until the early 1800s, when it was replaced by trade in palm oil and other natural resources.

During the Berlin Conference in 1884, Cameroon was entrusted with German control, as Germany had been heavily involved in the country. Cameroon thus became a German protectorate from 1884 to 1919 – in practice an authoritarian controlled German colony.

After years of political and armed rebellion against the French colonial authorities, East Cameroon gained its independence on January 1, 1960. Western Cameroon followed suit with independence from the British on October 1, 1960, and the two parts of the country then joined the independent federation. Cameroon. The northern part of western Cameroon, after a 1961 referendum, chose to join Nigeria. Following a referendum in 1972, the federation was abolished and Cameroon became a unified republic.

Since 1961, the country has had only two presidents. The first was Ahmadou Ahidjo, who was in power until 1982, when he surprisingly withdrew in favor of his Prime Minister Paul Biya. Biya took over as president and is still in power today (2019).

While Ahmadou Ahidjo was known as a relatively authoritarian president who did not tolerate political opposition, and who built the country a lot based on state corporate ownership, Paul Biya has opened up to more democracy and private business. On the other hand, economic development was better under Ahidjo, with more order and less unemployment.

During Biya, the economy has gone through many crises, partly as a result of the introduction of a structural adjustment program under the auspices of the World Bank.

At the same time, the democratic embellishment under Biya has stopped, in whole or in part, so that in practice the country is now only a democracy in theory. In addition, corruption and bad governance have helped undermine economic development, so that, despite increased gross domestic product (GDP), it is only a small elite that benefits from wealth.

Exports, first of its own crude oil, and later its transit of crude oil transported by Chad pipeline, have made Cameroon one of the most economically disadvantaged countries in tropical Africa, but agriculture remains the most important trade route.

Some fishing is also conducted, and this is mainly based on small private fishing boats. Industrial fishing accounts for only about ten percent of the business.

Cameroon’s industrial production consists primarily of the food industry. For example, it produces milk, fruit juice, sugar, flour, and products with oil palm fat such as soap, butter and chocolate. Other industries include aluminum smelters and a steel smelting plant, as well as oil refining and production of electric power from both hydropower and oil and gas-fired power plants.

Another major part of Cameroon’s economy consists of service industries, including the trade sector, banking and finance, transport and shipping.

The country’s infrastructure has long been relatively underdeveloped. Compared to neighboring Nigeria, on the other hand, the electricity supply is far better, while the road development is waiting.

In sharp contrast to widespread poverty, underdevelopment and corruption stand the Cameroonians’ rich and varied forms of art and cultural expression.

Traditionally, art in Cameroon is often associated with the presence of various natural resources such as wood, clay, stone and metals. In modern times, art and culture have also assumed more modern forms. The struggle for liberation and independence gave rise to a rich literature that dealt with not only life and love, but also the description of the struggle for freedom and the price that must often be paid in the form of human suffering, and later of being liberated, yet not feeling. free yourself. Similar expressions also exist in the form of films.

Nevertheless, music and dance have been the most prominent cultural expression in Cameroon in recent times.