The Comoros archipelago in the Indian Ocean between the northern tip of Madagascar and the east African coast includes the island of Mayotte (a French overseas territory) and the islands of Grande Comore, Anjouan and Mohéli. The “Islands of the Moon” (the translation of their Arabic name) have become an insider tip in recent years: hospitable people, untouched nature and inviting beaches.

The Comoros have three official languages. In addition to Comorian, French and Arabic are also spoken. The Comorians come from different cultures. The influences are influenced by Arabs, Madagascans, Bantu, Indians and Indo-Melanesians. Hundreds of Europeans are still actively involved in bringing European culture to the table.

Due to the different topography and vegetation, reinforced by various historical developments, each island in the archipelago has its own character. Tropical dreams are especially fulfilled on the north and west coasts of the main islands: here dazzling white, mostly deserted sandy beaches contrast with black lava rocks under shady palm trees on the Indian Ocean.

Anyone visiting the Comoros will immediately be amazed by the islands. Anjouan is usually the starting point of a trip. This island is also the most densely populated and offers numerous opportunities for leisure activities for visitors and tourists.

Up to 60 percent of the population lives in the country in the Comoros. However, many migrate to the larger cities to look for work. The population is primarily active in fishing, hunting and forestry. These are also the main sources of income for the population. For self-catering mainly maize, yams, sweet potatoes, cassava, bananas and rice are grown. Spices such as vanilla, cloves, pepper, cocoa and sisal grow on plantations, which mainly belong to French traders.

Population: 794,683 residents (July 2011, COUNTRYAAH.COM), making it one of the poorest countries in Africa. The population is composed of Arabs, Malagasy, Bantu (descendants of African slaves), Indians and Indo-Melanesians. In addition, several hundred Europeans live in the Comoros.

Here is a detailed list of the largest cities in the Comoros.

Form of government: The Comoros have been an Islamic Federal Republic since 1982, the new constitution dates from 2001. The unicameral parliament is made up of 43 members whose legislative period is 6 years. The Comoros declared themselves independent of France on July 6, 1975.

Head of state and head of government: President Ikililou Dhoinine, since May 26, 2011

Without knowledge of the French language, a trip to the Comoros will be difficult.

Local time: CET + 2 h.
There is no change between summer and winter time in the Comoros.
The time difference to Central Europe is +2 h in winter and +1 h in summer.

The Comoros archipelago lies in the Indian Ocean, in the Mozambique Channel northwest of Madagascar. The name Comoros comes from the Arabic Juzur al-Qamar, which means something like moon islands.

The archipelago is about 300 km from both Madagascar and East Africa. The Comoros consist of four main islands surrounded by coral reefs: Ngazidja (Grande Comore), Ndzuwani (Anjouan) and Mwali (Mohéli). The geographically, historically and culturally associated island of Moare (Mayotte) is a regional authority (“Collectivité départementale”) of France. In 1974 it was the only island in the archipelago that voted to remain as a French regional authority, but is claimed by the Comoros. Together, these islands are about the size of the state of Saarland.

All islands are of volcanic origin and are characterized by a mountainous relief. Volcanic mountains with furrowed slopes, plateaus, ridges and mostly only narrow coastal strips form the landscape. The coasts of the islands are mostly rocky and lined with coral reefs.

The Karthala volcano is the highest point on the island of Grande Comore and has the world’s largest volcanic crater. It had its last major eruption in 1977. Smaller eruptions were recorded in April 2005 and May 2006. Occasionally tropical cyclones and tsunamis reach the islands during the rainy season (November to April).

This map of the population distribution in the Comoros was created by the Worldmapper team. Densely populated areas appear bloated, the area of ​​sparsely populated areas is reduced. The shape of the grid has been preserved; an underlying map with the original geographical extent helps interpret the map. The distorted map should help to present abstract statistical information clearly. 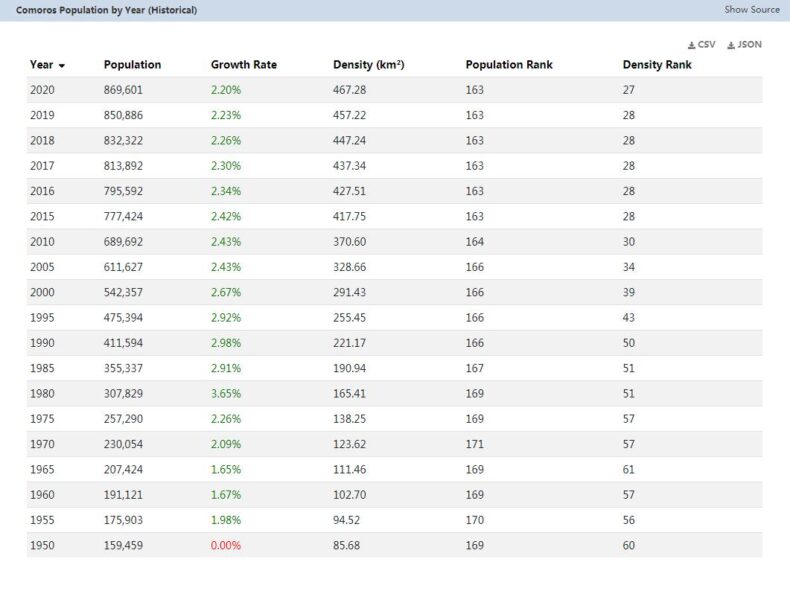