With its soft sandy beaches and guaranteed warmth, Djerba is a great place to rest and relax. To counterbalance the beach life inland, you can still feel the local atmosphere and walk in the quiet olive groves.

A small island in the Mediterranean

Situated on the Tunisian coast , Djerba is the southernmost island in the Mediterranean, with a scenic and peaceful area especially popular with families with children and older tourists. Djerba’s white sandy beaches, turquoise sea and warming sun provide the perfect setting for a relaxing holiday.

The most important cities in Djerba are Houmt Souk and Midoun, which are also close to the most popular hotel areas. The island is only 29 kilometers wide and 27 kilometers long, so it is easy to explore the beautiful and historic area even in a short time.

A warm and sunny destination

Djerba has a mild Mediterranean climate. Summers are hot and sunny, winters are mild and wetter. On summer days, the temperature rises above 30 degrees, and the meter does not drop below 15 degrees during the winter season.

Djerba is ideal for a beach holiday

Djerba is an excellent beach destination, also suitable for those who want to go lying down. The island has good water sports, including water skiing and windsurfing and kite boarding. There are also golf courses and riding schools in the area.

The most pleasant beaches on the island are located on the north coast. Although most of them are only available to hotel residents, there are also a few common beaches to be found among them. The beaches of Houmt Souk are often quieter than the beaches of the hotel areas, although they also have plenty of hobbies and services to suit all tastes.

Thalassotherapy is an ancient form of treatment

In recent years, Djerba has sought to differentiate itself through thalassotherapy. The therapy is based on seawater, algae and seabed clay, whose beneficial salts and minerals treat and protect the skin. The health effects of thalassotherapy were already known among Phoenicians who lived before the beginning of time.

The island of Djerba has numerous spas and spas that offer not only thalassotherapy but also, for example, thermal baths, hydrotherapy, oriental massages and various beauty treatments. Many of Djerba’s spas are located next to the hotel.

The long history of Tunisia as part of the French colonial rule is particularly evident in Djerba, where, in addition to the Arabic language, it is France that is best off. English is less well understood, but it will work well as long as the attitude is right.

Tunisia still stands out from other Mediterranean destinations in terms of prices. In local bazaars in particular, you can make inexpensive discoveries, as long as you know the secrets of bargaining.

FLIGHTS, ACCOMMODATION AND MOVEMENT IN DJERBA

Djerba is one of the summer destinations of a few Finnish travel agencies. In addition to package tours, there are no direct flights from Finland to Djerba or the rest of Tunisia. However, you can get to the country by changing planes in one of Europe’s major fields.

Djerba-Zarzis Airport is located about 10 km from the largest city on the island, Houmt Souk, and 15-30 km from the hotel areas on the north coast.

Increased tourist flows have inspired numerous accommodation entrepreneurs on the island. Another finer hotel has been built in the area, where you can find a choice. Particular emphasis has been placed on the comfort of families with children, and some all-inclusive accommodation packages are also available.

Hotels are almost invariably located on the beach, so they usually also have their own, supervised strip of sandy beach.

The easiest way to get around the island is by taxi. The distances are short, so the prices also remain reasonable. There are also shared taxis ( louage ) and buses between the cities of Djerba . For the self-employed traveler, renting a bike, scooter or car is a great option to explore the small and flat island and its treasures.

From the island you can reach the Tunisian mainland by ferry or along a built embankment. The ferry to the mainland leaves from a small fishing village called Adjim, from where the sea journey to El-Jorf takes about 20 minutes. The 6-kilometer-long embankment originates from the south coast of El Kantara. 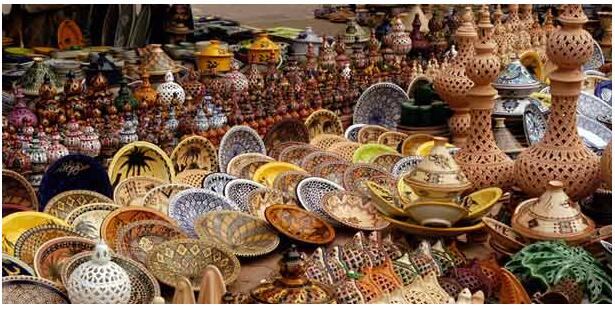 The island of Djerba is home to both Jews and Muslims, which means twice as many wonderful religious places to visit for the tourist. The island is home to, among others, the oldest synagogue in North Africa, el-Ghriba. In Houmt Souk, on the other hand, the cityscape is dominated mainly by mosques and a harbor that is crowded with fishermen, especially in the early hours of the morning.

Houmt Souk means marketplace. The lively market is one of the things Djerba’s largest city is known for. In the market, artisans and merchants sell traditional rugs and detailed ornaments. The most typical of Tunisia is represented by colorful dishes, the decorations of which charm with their beauty.

Genuine Tunisia is said to be found in the hinterland, where herds of people have at least not yet found it. The area is dominated by olive groves and orchards with figs and pomegranates growing on the slopes. The fertile landscape is paced by traditional white-walled dwellings.