Guinea is one of Africa’s most resourceful countries, yet one of the continent’s less socially and economically developed states. The majority of the country’s income comes from the mining sector, while the vast majority of the population is employed in agriculture.

The mining industry was established under French colonial rule, and mineral extraction has even longer history in what constitutes today’s Guinea, especially the extraction of gold. The development of the modern sector of the country’s economy began during World War II, when the extraction of bauxite deposits began, and the bond with France was strengthened as a result of the economic value of the colony.

When Guinea chose to stand outside the French Commonwealth by independence in 1958, most ties with France were severed, adversely affecting the new state’s economy, including the withdrawal of French interests. An economic development built on the basis of the colonial period was therefore broken, and Guinea stagnated, although the extraction of mineral riches continued.

One reason for the stagnation was also the decision to nationalize most of the economic activity, with the exception of agriculture, although collective schemes were introduced there as well, and the mining industry. The mining industry developed as the strongest part of the economy, but largely isolated from the rest of the business community. Later, much of the state’s ownership interests were privatized, as part of an economic reform program implemented from the latter half of the 1980s. The program was supported by the International Monetary Fund (IMF) and the World Bank, and included, among other things, a devaluation of the national currency, syli (later Guinean franc), a sharp reduction in public administration and higher prices of agricultural products and liberalization of trade abroad.

Guinea’s exports are almost entirely dominated by minerals, and the country’s mineral deposits are so valuable that, with better utilization, they are believed to be able to make the country one of the most prosperous in West Africa. Guinea has significant bauxite deposits, as well as deposits of iron ore, diamonds, gold and other minerals. The strong dependence especially of bauxite makes Guineas economy vulnerable to fluctuations in the price of this commodity on the international markedene.En part of the country’s mineral exports have gone over ports in Liberia, and the war which affected therefore Guinean economy. At the same time, the country was indirectly drawn into regional destabilization, through the civil wars in neighboring Liberia, Sierra Leone,Guinea Bissau and Ivory Coast.

Both the mining sector and agriculture have fallen into disrepair and suffer, among other things, from poor infrastructure. There are plans to build a railway from the ore fields to Conakry. Oil and gas deposits are being sought on the continental shelf, and investment has been invested in rebuilding parts of the old plantation economy; including for the cultivation of bananas, rubber and palm oil. Guinea also has large forest areas with considerable untapped potential for timber extraction, as well as potential for hydropower production. Measured by social indicators, Guinea is one of the world’s poorest countries, with low life expectancy and high child mortality, even though the country has a relatively high gross national income per capita.

Agriculture is Guinea’s most important industry in terms of employment, with over 80% of the working population engaged. The sector accounts for approx. 3 / 4 of GDP. Until 1984, Guinea was self-sufficient with the most important foods, but had to import considerable quantities of food; above all rice, which is the main industry for the country’s inhabitants. Food production rose again towards the end of the 1990s. After independence, agriculture was partly organized on a collective basis, a scheme that was abolished after the regime change in the 1980s.

Rice, oil palms, bananas and pineapples are grown in the humid coastal areas, in the highlands including maize, coffee and china trees. In the Niger plains, rice is grown by artificial irrigation, and otherwise millet, cassava and peanuts ( peanuts ).

From 1985, cotton is grown from plantations in Upper Guinea (Upper Guinea). Previous plantation operations have been re-established in several areas. Agricultural products for export are especially bananas, coffee, pineapple, palm oil, peanuts and citrus fruits, as well as some vegetables. Because of the tsetse fly, the fat operation is concentrated to higher-lying areas, where the fulanids hold large flocks of small ndamak cattle, a breed that is resistant to the tsetse fly.

Guinea also has large forest areas with significant untapped potential for timber extraction. Over 2 / 3 of the area is covered by forest, but inadequate infrastructure hinder commercial exploitation.

The fishing industry is underdeveloped, and catches in Guinea’s waters are made largely by foreign trawlers; some of the craftsmen. Since 1983, Guinea has signed agreements with the EU for fishing in the waters.

The mining sector is the most dynamic sector in the country’s economy and accounts for by far the largest share of official export revenue (over 90% in the 1980s, about 80% in the 1990s). The sector has accounted for approx. 1 / 5 of GDP since the late 1980s. As part of the economic reforms introduced from the 1980s, new mining legislation was introduced in 1995, among other things, to improve conditions for foreign investment and reduce the state’s direct role in the mining industry. A number of new exploration licenses were granted in the late 1990s. At the beginning of the 2000s, bauxite, diamonds and gold were commercially mined, with prospects of also showing deposits of iron ore and nickelcould be exploited. Lack of infrastructure and lack of power impede the full exploitation of the potential of Guinea, a country with partially inaccessible areas.

Guinea has approx. 25-30% of the world’s known bauxite deposits, with a high quality ore, are the world’s largest exporter. The extraction takes place from mines at Boké-Sangaredi, Fria-Kimbo and Kindia-Debele, with the former being the largest. From there, a railway track has been built to a newly constructed port at Kamsar, from where the ore is shipped. Recovery began at Fria in the 1930s, and processing into alumina in the 1960s. The smelter there is Guinea’s largest industrial plant, with a capacity of approx. 700,000 tonnes a year. Plans have been drawn up for the extraction of deposits also at Dabola and Tougué, where an aluminum production plant has also been planned. A number of foreign companies have been involved in bauxite extraction, often in consortia and in joint venture cooperation with the Guinean state.

Guinea has deposits of diamonds and gold which also constitute a significant part of the country’s exports. Gold has been mined for hundreds of years, and still continues with traditional methods, in addition to industrial extraction. Several foreign companies have become involved in the sector; among these Norwegian Guinor Gold Corporation, with the Léro mine, opened in 1995, as the largest investment. Extraction of diamonds takes place both individually and industrially, and much of the uncontrolled extraction has been smuggled out of the country. The largest volume is recovered at the Aredor mine at Kerouane, which was opened in the 1930s but revitalized in recent times. In the southeastern part of the country are large iron ore deposits that were put into production in 1981, after the deposits on the Kaloum Peninsula near Conakry were depleted after operation from 1953.

Valuable deposits of high quality iron have been found in Mt. Nimba, but the planned recovery has been postponed partly because of the civil war in neighboring Liberia, which makes it difficult to transport the ore to the Buchanan shipping port.

Guinea has been confirmed to have deposits of granite, uranium, nickel and cobalt. Oil and gas deposits are being searched on the continental shelf.

The country has large expandable hydropower resources estimated at 6,000 MW, but in 2016 only 368 MW was developed. The country’s largest hydropower plant, Kaleta Dam, came into operation in 2015 with an installed capacity of 240 MW. A new hydroelectric plant at the Konkouré River is under construction. Souapiti Dam will have a production capacity of 550 MW and will, among other things, supply a new smelter with electrical energy. In addition to hydropower, the country has a total heat capacity of 127 MW.

Guinea’s industry is underdeveloped and is mainly based on the processing and processing of local raw materials, as well as the production of finished goods to replace imports. Among other things, cigarettes, beer and mineral water are produced for the local market, and the only industrial activity of size is the processing of bauxite. Several former state-owned enterprises have been closed down, including for textile production

Guinea normally has profits from its foreign trade, thanks to bauxite exports from the early 1970s. A short-term decline in deficits in the early 1990s was mainly due to lower revenues from the sale of bauxite. At the same time, revenues from gold exports increased. A positive contribution to the financial situation is also considerable development aid, including from France, the EUand the World Bank. In 1995, the Norwegian authorities canceled Guinea’s public debt to Norway as part of an international debt relief program. In the early 2000s, international aid declined in response to the government’s handling of the opposition. Guinea’s exports mainly consist of minerals (bauxite, diamonds and gold) as well as alumina – and some fruits and vegetables. The country imports petroleum products, food, machinery and transport equipment, building materials and textiles.

Inadequate transport infrastructure is considered to be the main obstacle to the economic development of Guinea, including for more extensive exploitation of the country’s mineral deposits and forests. The capital Conakry has a rail link to Kankan, and a much needed rehabilitation was begun in the late 1990s. A 144km long sidewalk to Fria is used for transporting bauxite and alumina. A 134 km long track (completed in 1973) leads from the bauxite deposits at Boké to the port of Port Kamsar. New lanes are planned from the iron ore fields near the Liberia border to the coast.

The road network includes the main road from Conakry to Bamako (895 km), the capital of Mali, and the international highway between Dakar in Senegal and Abidjan in Ivory Coast. The road network has undergone extensive rehabilitation in recent years, including new construction to establish connections with new, isolated areas. 2001 began work on a new road connection from Kankan to Mali’s capital Bamako. The road network in 1999 was 21 215 km. Conakry has an international airport. The main port cities are Conakry and Port Kamsar; the first of which underwent extensive rehabilitation in the late 1990s. 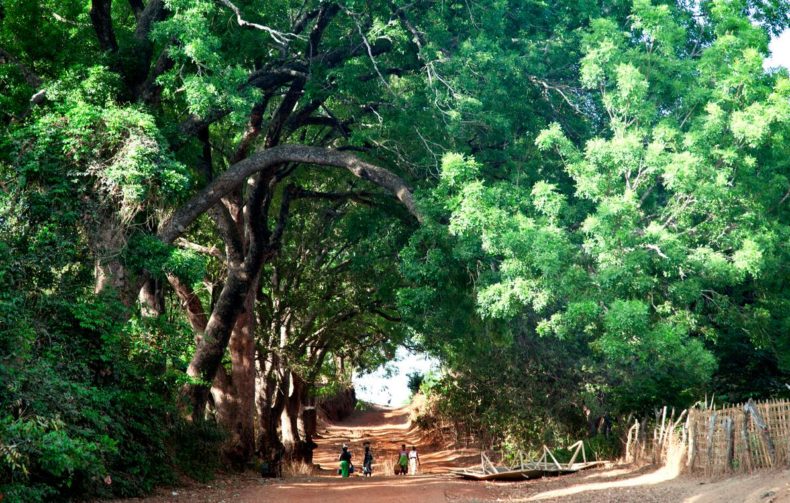