Eritrea is one of the most unknown countries in Africa. It is the youngest independent country in Africa and is located on the Horn of Africa on the Red Sea. The name Eritrea refers to erythra thalassa, which means Red Sea in Greek. The long struggle for independence against Ethiopia and the recent border conflict with the overpowering neighbor left almost no room for tourism.

There is a lot to discover in Eritrea: The spectrum extends from the capital Asmara in Italian Art Deco style to the Islamic port of Massawa. The wonderful reefs off the Dhakla Islands are perhaps the most untouched in Africa and are great for diving and snorkeling. In contrast, the loneliness of the Danakil Desert looks like from another world.

The African state of Eritrea has fascinating landscapes. To experience the sunset on the Red Sea is one of the most beautiful views that can be experienced here in the tranquility and naturalness of Eritrea.

Eritrea was an Italian colony in the 20th century, later the country belonged to Ethiopia. In 1993 Eritrea was finally able to become independent after a hard-fought phase of 30 years. The Popular Front for Democracy and Justice has been ruling in Eritrea since 1993.

The transport network was very well developed in the past. The colonial power of Italy at that time ensured good infrastructure and a branched transport network. Today only a part of it is preserved, but for African conditions these roads are well preserved in Eritrea. As a tourist, however, you shouldn’t expect paved roads as you know them from Europe. Most of the streets are simply gravel roads. Eritrea also has rail transport. A train moves between Massawa and Asmara at irregular times.

Here you will find a detailed list of the largest cities in Eritrea.

Lowest point: near Kulul in the Danakil Depression, -75 m

Form of government: Eritrea has been a republic since 1993, the constitution dates from 1997. The National Assembly is made up of 150 members. From 1941 to 1952 Eritrea was under British rule, from 1962 it was an Ethiopian province, but a civil war broke out against its big neighbor. On May 24, 1993 Eritrea gained independence from Ethiopia, but in 1998 a border conflict flared up with the neighboring country, which ended on June 18, 2000 with a ceasefire agreement. There have been no free elections since independence.

Head of state and head of government: President Isayas Afewerki since May 24, 1993

Language: the official languages ​​in Eritrea are Arabic and Tigrinya. In addition, spoken in the different regions of the country Afar, Bilen, Kunama, Nara, Saho and Tigre. English is the educational and business language in Eritrea.

Religion: The population is 50% Christian (Eritrean Orthodox Church) and 50% Muslim.

Local time: CET +2 h. In Eritrea there is no change between summer and winter time.
The time difference to Central Europe is +2 h in winter and +1 h in summer.

Eritrea is located on the Horn of Africa on the Red Sea. Neighbors of the relatively small state are Ethiopia in the southwest, in the southeast of Djibouti and in the northwest of Sudan.

Here you will find a detailed topographic map of Eritrea.

The country is made up of four types of landscape: coastline, highlands, the western lowlands and the 300 islands off the coast (of which the Dahlak archipelago has the largest share).

The coastal strip, which is at most 50 km wide, stretches over 1,000 km along the Red Sea. In the northern part of the country is the highlands, which reach up to 2,600 m. The southern part of Eritrea is dominated by the low Danakil Mountains. Between the mountains in the north and south is the very deep Danakil or Afar valley. This region is one of the deepest areas in Africa. The Danakil Valley is very active tectonically, in the distant future the eastern part of Africa will separate from the rest of the continent.

While the highlands are partly forested and fertile (and used for agriculture), the lowlands are dominated by deserts and dry savannas. The larger cities in Eritrea are in the highlands, where about half of the population lives.

This map of Eritrea’s population distribution was created by the Worldmapper team. Densely populated areas appear bloated, the area of ​​sparsely populated areas is reduced. The shape of the grid has been preserved; an underlying map with the original geographical extent helps interpret the map. The distorted map should help to present abstract statistical information clearly. 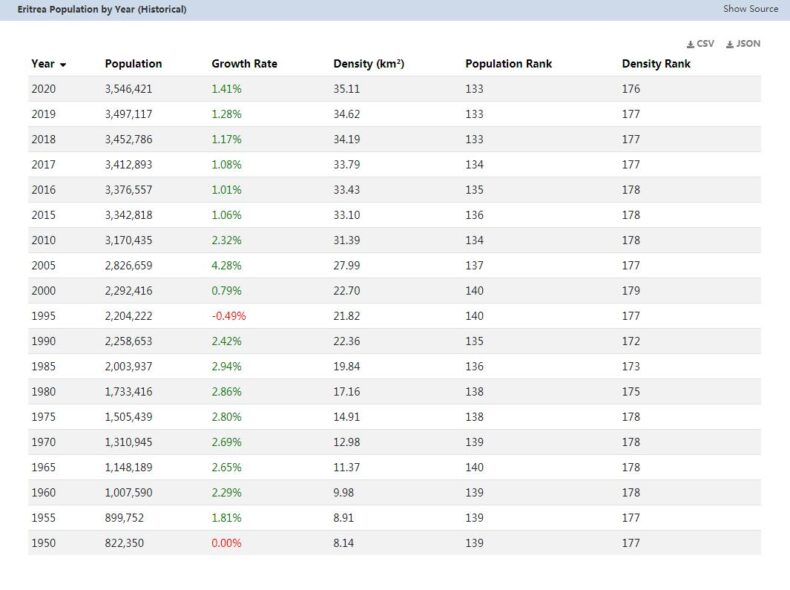