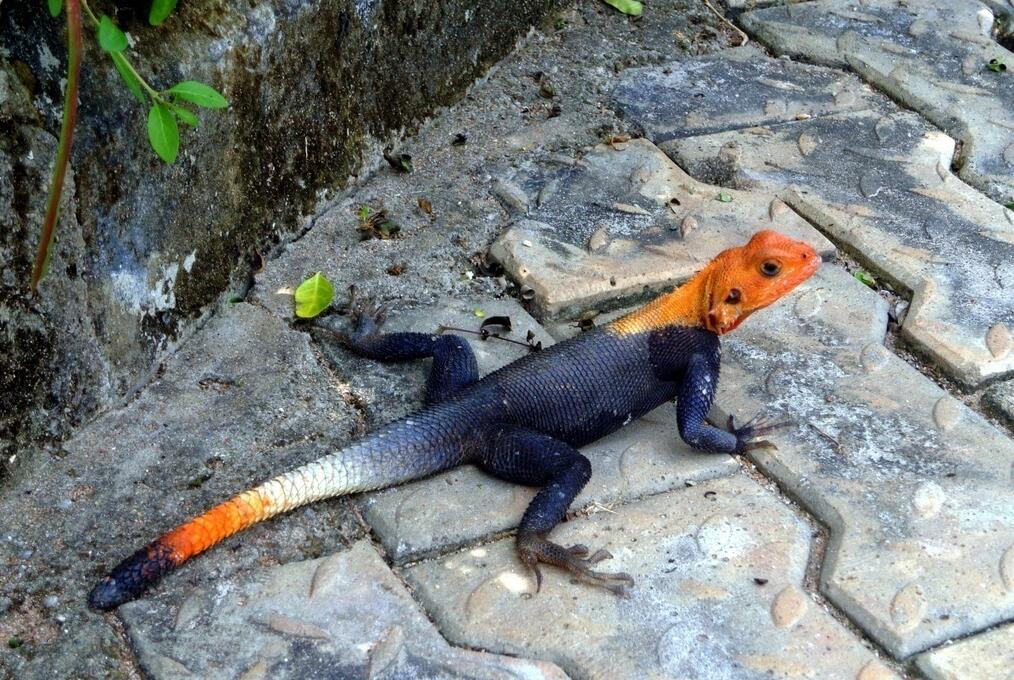 Nigeria consists mostly of bedrock (Precambrian rocks ), in the east partly covered by lava masses. Sediments from Cretaceous, Tertiary and Quaternary sediments have been deposited in the southeast and in the Niger and Benue valleys. Along the eastern border there are deposits of law and chalk. Lead and zinc deposits are found in the oldest chalk deposits. Quaternary deposits in the form of sand are found along the coast and in the northeastern area towards Lake Chad.

Nigeria is characterized by highlands against the border with Cameroon and in central, inner parts of the country (the Jos Plateau ). Along the coast there is a flat swamp area, which in the Niger Delta is 100 kilometers wide. Within the swamp zone lies a coastal plain (up to 300 meters above sea level), which gradually rises inland. In the valley from the northwest comes the river Niger, from the east its most important bee, Benue. These meet around the middle of the country and run like Lower Niger towards the coast, where it forms a large delta. The land north of these rivers consists of a large, monotonous plateau with extensive savannah land. Here are both lowers (Sokoto, Bornu), and the mighty Jos Plateau (formerly Bauchi Plateau), 1200 meters above sea level, highest peak 1780 meters above sea level.

The soil is mostly red, leached tropical soil with low humus content. In the northeast, the country descends towards Lake Chad.

Nigeria is a republic in West Africa, on the Gulf of Guinea, borders east to Cameroon, northeast to Chad, north to Niger and west to Benin.

Nigeria is Africa’s most populous state with over 180 million people. There are over 200 ethnic groups with their own languages. The largest and dominant groups are yoruba, hausa and ibo. English is the official language.

Due to its population, military strength and economic position, Nigeria is considered one of Africa’s great powers, often along with South Africa. Nigeria is Africa’s largest oil producer. Oil revenues have greatly affected Nigeria’s development, including a significant modernization of the economy, but they are linked to widespread corruption. Agriculture employs most of the population, and the country previously had significant exports of agricultural products.

Ethnic, religious and regional contradictions in the country are great, and have marked their political development. After independence from Britain in 1960, the country has undergone a series of military coups and had 28 years of military rule. In 1967, the inhabitants declared the eastern part of Nigeria as an independent republic under the name Biafra. After three years of civil war (the Biafra War 1967-1970), the area was again incorporated into Nigeria. Nigeria has enjoyed peace and formal democracy since 1999, but has been characterized by a number of conflicts, widespread violence and the conduct of elections has been strongly criticized, though gradually improved.

The name is derived from the river name Niger, from the tuaregord n’higren, ‘flowing water, river’. The national anthem is Arise, O Compatriots, Nigeria’s Call Obey.

On the savannah in the north live many antelope species, giraffe, warthog, lion, spotted hyena, stairs, frankoliner and guinea fowl.

Forest elephant, brush, chimpanzee and baboon are in the forest.

More than 940 bird species have been observed in Nigeria. Kites, vultures and falcons are numerous. The forests house many bird species such as jakos, turakos, humpbacks and paradise flycatchers.

The forests also have a rich fauna of snakes, spider animals, lizards ( lizards ) and insects, including large butterflies, goliath beetles and cockroaches.

The Agama lizard has adapted to urban life and is widely used in Nigeria.

The vegetation varies from south to north, depending on the rainfall. It grows in east-west zones, parallel to the equator. Along the coast there is a belt of mangrove forest and freshwater marshes, up to 100 km wide in the Niger Delta. On the coastal plain there are tropical rainforests with many economically important species, such as mahogany, cocoa trees and oil palm trees. In the most densely populated areas, the original vegetation has been replaced by palm grove. Central Nigeria has tropical forests in the valleys and savanna on the plateaus. Three-set savanna with gallery forest along the rivers covers more than half of the area north of the forest zone. Monkey bread trees, tamarind and Parkia africana are the most common tree species. In the far north, the savannah goes into the semi-desert with scattered acacia trees and dump trees.