More than 300 years ago, the Prussian flag was waving on the then Gold Coast. Shipsof Elector Friedrich Wilhelm landed on the coast of what is now Ghana and built the fortress Groß-Friedrichsburg there. Today, only the ruins at Accra tell the story of this short colonial episode.

Today’s Ghana has long been a sought-after destination for many seafaring nations, and in 1874 the area was officially designated britishCrown colony “Gold Coast”. Subsequently, the British conquered the Ashanti empire that followed in the north.

On March 6, 1957, the country declared its independence as the first black African colony. The name of the country is said to refer to ancient African traditions. The old Sudan empire Gana – to distinguish it without “h” – was however far northwest of today’s Ghana.

Visitors to Ghana will find large tropical rainforests in the country. Several reservoirs have also been created here, so Ghana offers a varied landscape. Lake Volta is one of the most popular travel destinations. This reservoir is not only the largest man-made lake but also the largest inland lake in Ghana. The flora and fauna, which is rich in species for West Africa, is a feast for the eyes and also of great economic importance. The population of Ghana benefits from the steadily increasing tourism. As a result, more and more people can be employed and have the opportunity to rise socially. The other is the export of precious wood very important and profitable for Ghana. The country is rich in raw materials, especially gold is available here, which is why the region was formerly called the Gold Coast.

The different cultural influences throughout history have left their mark. During the colonial period, some forts were built on the Atlantic coast. These are still in very good condition today and were included in UNESCO’s World Heritage List in 1997. Another attraction is the traditional Ashanti buildings. These are also part of the world cultural heritage.

Here is a current list of the largest cities in Ghana.

Form of government: Ghana has been a presidential republic since 1979 and is represented in the Commonwealth. The constitution dates from 1992. The parliament is made up of 200 members; together who are elected every 4 years. The new constitution introduced the multi-party system and universal suffrage. Ghana has been independent of Great Britain since March 6, 1957 (the first black African country to achieve independence).

Local time: CET -1 h. In Ghana there is no changeover between summer and winter time.
The time difference to Central Europe is -1 h in winter and -2 h in summer.

Ghana borders Ivory Coast in the west, Burkina Faso in the north and Togo in the east. In the south, Ghana has access to the Atlantic

The relief in Ghana in West Africa is largely flat, only in some places 900 m are reached, about half of the country’s area remains below 150 m.

The coastline to the Atlantic Ocean is 543 km. Geographically, Ghana can be divided into the coastal plain, the subsequent rainforest and the savanna zone in the northern part of the country.

Another structuring option considers the surface structure. A distinction can be made between five different natural areas: the Low Plains, the Ashanti highlands, the Akwapim-Togo mountain range, the Volta Basin and the High Plains.

Here you can find a detailed topographic map of Ghana.

The low coastal plain with extensive sandy beaches and subsequent mangroves is known as low plains. To the north, the country rises to the Ashanti highlands, which are 450 m high on average. In the east of the Ashanti highlands is the largest natural area in Ghana, the approximately 87,000 sq km volta basin. The High Plains are further north. The regions in the north are already part of the Sudan landscape. The Akwapim-Togo chain begins near the Ghanaian capital Accra. The highest peaks of Ghana rise up in this mountain range reaching as far as Togo.

Approximately half of the country’s area of ​​Ghana (approximately 158,000 sq km) is drained by the Volta River. The largest fully man-made reservoir in the world was created in the lower reaches of the Volta by the construction of the Akosombo dam. The Ashanti highlands are the source of numerous rivers that flow into the Atlantic Ocean.

In the recent past, fauna and flora have been placed under greater protection and made accessible to tourism, for example in the Mole National Park. Ecotourism in particular should be promoted. The last remaining stocks of the species-rich rainforest are to be preserved.

This map of population distribution in Ghana was created by the Worldmapper team. Densely populated areas appear bloated, the area of ​​sparsely populated areas is reduced. The shape of the grid has been preserved; an underlying map with the original geographical extent helps interpret the map. The distorted map should help to present abstract statistical information clearly. 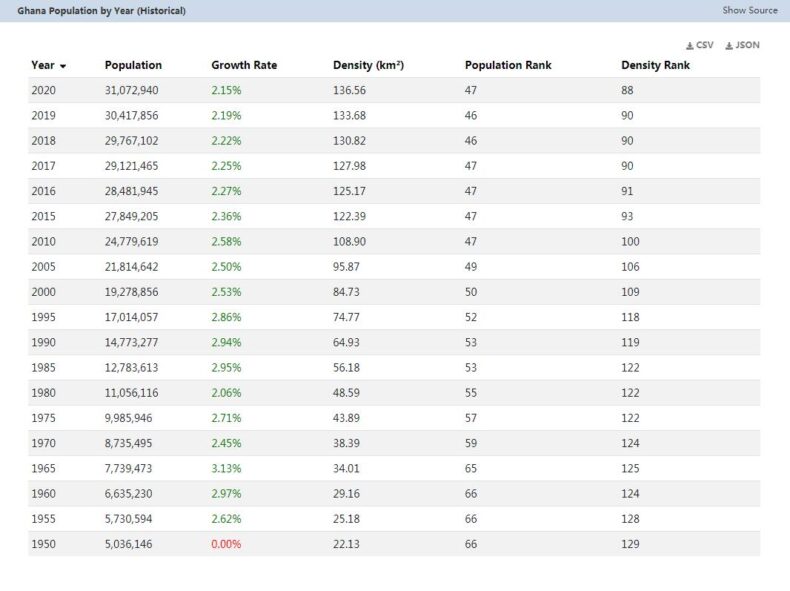 Passport: is generally required for travel to Ghana. The passport must be valid for at least 6 months after the stay.

Visa: Generally required. All foreigners must have a registration card issued upon entry and be able to present 2 passport photos.

Period of validity: Single entry Visa: 3 months from the date of issue. The duration of the stay is determined at the border, for Germans it is usually 30 days (renewable on site). Please note that despite the fact that the Ghanaian diplomatic missions abroad are valid for more than two months, the visa is automatically limited to a validity of 60 days when entering Ghana.

Application: In person or by post at the embassy or the honorary general consulate.

Business Visa: in addition a letter from the German company about the purpose and duration of the trip with a confirmation of the cost – invitation from the Ghanaian business partner.

You can download the Ghana Visa Application Form here.

An addressed free envelope should be included when applying by post.

Processing time: about a week

If you intend to extend your stay beyond the period granted in your visa or to visit one of the neighboring countries during your stay, you will need a visa extension or a so-called re-entry visa. Both are available in Accra from the Immigration Service. The processing time can be up to 14 days.

Vaccinations: Information on international vaccination certificates that are required for entry can be found in the Ghana – Health chapter.

The same visa requirements apply to the children as to their parents.