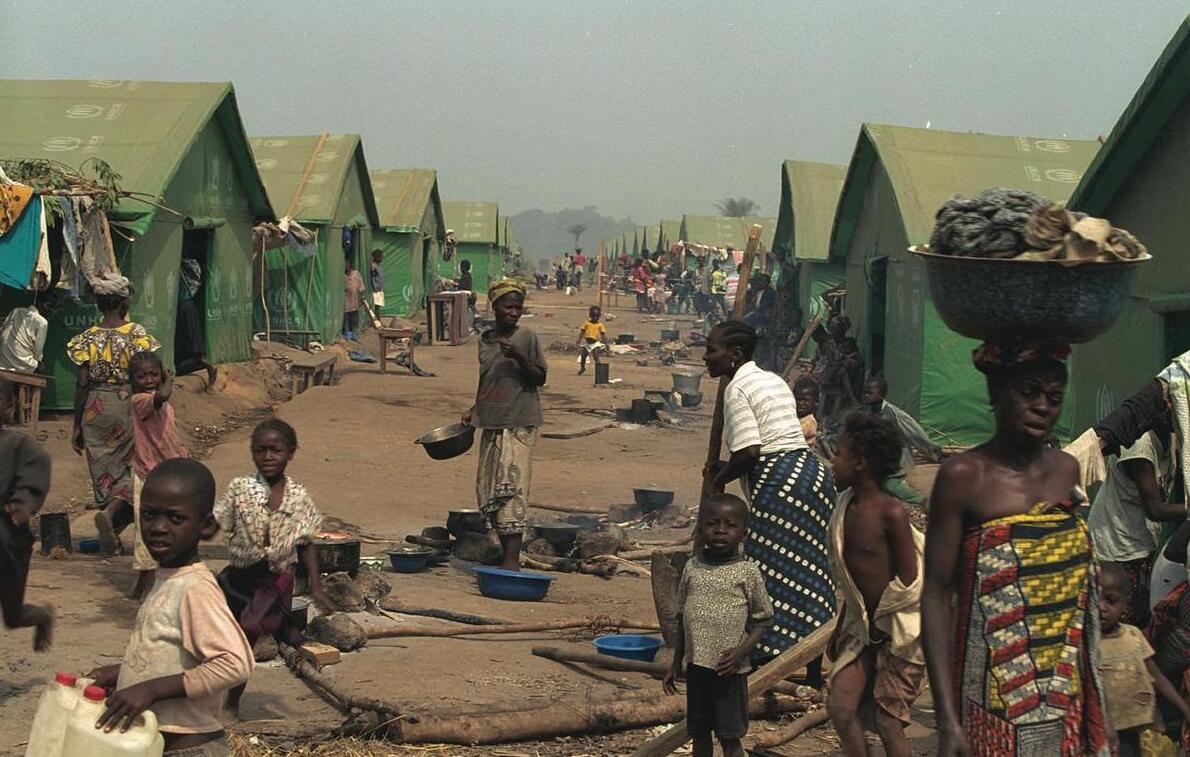 Guinea, Republic of West Africa. It borders Guinea-Bissau in the northwest, the Atlantic in the west, Senegal in the north, Mali in the north and east, Ivory Coast in the east and Sierra Leone and Liberia in the south. It is often called Guinea-Conakry to distinguish it from neighboring Guinea-Bissau and Equatorial Guinea. The country is one of Africa’s most resource-rich, especially in minerals, but at the same time one of the continent’s least developed states. The capital is Conakry.

Guinea (the name) is possibly of ‘guaya-na’, ‘the esteemed people’, which was the name of a West African kingdom in the 1300s.

The coastline is approximately 320 kilometers long and strongly cut with a number of river outlets and mangrove swamps. Inside is a 50-80 kilometer wide coastal plain which, in terraces, rises to the Fouta-Djalon massif at 1233 meters above sea level (Mount Kavendou). Here, West Africa’s three largest rivers Niger, Gambia and Senegal have their sources. The southeastern part of the Guinea Highlands, or forest region, is an isolated area of ​​forested hills in Guinea’s southeastern corner, including the country’s highest mountain, Mount Richard-Molard, 1752 meters above sea level, in the Nimba mountain range. Upper Guinea consists of the Niger plains. The flat landscape is broken up by outliers from Fouta-Djalon.

The climate is tropical and very humid in the coastal regions. In Upper Guinea, warm desert winds can bring temperatures up to more than 40ºC and the temperature differences between day and night can be very large. In the northern and western savanna areas, the annual rainfall is about 1500 millimeters. In the coastal areas and large parts of the inland, large amounts of rain may fall in June – November. There is a dry season in December – May. In Conakry, the average temperature for the year is 27 ° C and there are somewhat lower temperatures in the mountain areas than on the coast.

The coast has mangrove forests and oil plumes. The coastal plain has scattered populations of ebony and mahogany trees on savannas formed by logging and grazing from livestock. The plateaus have savannah vegetation with high grass during the rainy season. The mountain areas are wooded.

Due to a variety of habitats, wildlife is very varied. On the savannahs live elephant, coffee buffalo, several antelopes, spotted hyenas and red baboon. Rainforests include chimpanzees, colobus monkeys, brush pigs and antelopes, and hippos, Senegal Manatees and many species of fish in the rivers. There are more than 600 bird species, like many birds of prey, icebergs, guinea fowl, weavers and sunbirds. The reptiles include crocodiles, quiver snakes, mambas and cobras. 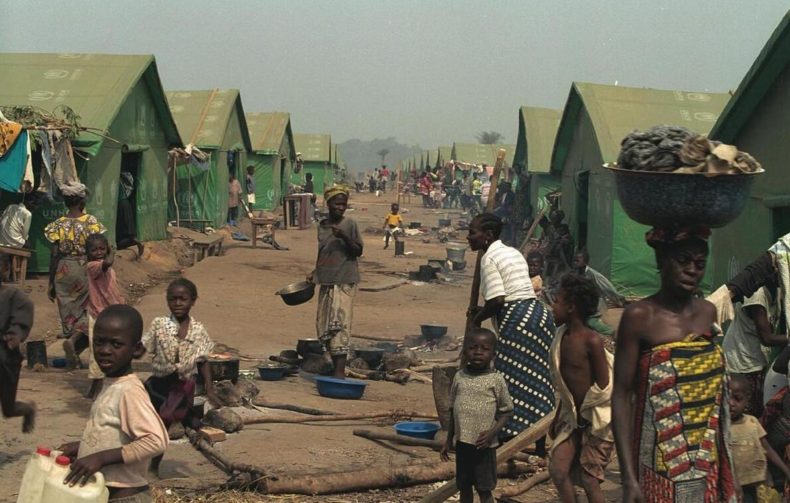 In 2000, Guinea received about half a million people who fled combat operations in Liberia and Sierra Leone. The high number of refugees has become a significant strain on the country’s economy and has caused some unrest among the various groups of people in Guinea.

There are about 16 ethnic groups. Fulani, which is mainly farmers in Fouta-Djalon, makes up about 33.9 percent of the population. Other large population groups are Malinian (26 percent) mainly in Upper Guinea and sosso or susu (about 19.1 percent) in the densely populated coastal region of Lower Guinea. The most important in the southwestern forest area are guerze (6.0 per cent) and kissi (4.7 per cent) (2015). The ethnic groups have their own language.

Muslims make up 86.7 percent of the population, Christians 8.9 percent and other / no religious affiliation 7.8 percent (2012).

The country is divided into seven regions and one government (Conackry).

The defense consists of five branches: Army, Navy and Air Force as well as the paramilitary National Gendarmerie and the Republican Guard Force.

Guinea is a member of the UN and most of the UN’s special organizations, including the World Trade Organization, the African Union (AU), ECOWAS (Economic Community of the West African States) and the Cotonou Agreement.

Early residents were probably baggage people on the Fouta-Djalon Plateau. These were driven to the coast by the Susu. In the 1000s, Guinea was part of the Ghanaian kingdom. In the 16th century, the Fulanians took control of the Fouta-Djalon area, vigorously Islamized and established a feudal empire that existed until the 19th century.

In 1145, the Portuguese came as the first Europeans to the Guinea area, which became a haven for slave traders. Later, English and French traders settled. In the 16th century, the Fulanians came in from the east and south. The actual colonial period first began in the 1840s. The French surrendered, under strong opposition from local rulers, the coastal area they called the Rivières du Sud. This area was part of Senegal until 1890 and then became its own colony under the name French Guinea from 1893. Two years later the colony became part of French West Africa.

In 1946, the colony gained overseas territory in the French Union and its inhabitants became French citizens. When the French community was established in 1958, after a referendum, Guinea chose to stand outside it and set up the independent Republic of Guinea. France’s response was to withdraw all aid, call in experts and destroy facilities and equipment from the aid work. The leader of the independence movement, Ahmed Sékou Touré, became Guinea’s first president. He built up the country around the trade union movement and the only allowed party PDG. Guinea was a one-party state with a Marxist political line and regulated economy. Political opposition was defeated by hard means and about two million Guineans went into exile. The relationship with neighboring countries was poor and several attempts were made to invade and coup to remove Touré’s regime.

In the 1970s, the regime’s policy became more moderate, and normalization of relations with other countries led to the resumption of contact with France. Touré died in 1984 and an officer group seized power in a coup. Colonel Lansana Contébecame president and Diarra Traoré became prime minister. The National Assembly was dissolved and a military council took power. The party PDG was dissolved, political prisoners were released from prisons and prison camps, and exile Guineans began to return. The Prime Minister’s post was abolished. Deputy Prime Minister Traoré tried in 1985 to seize power in a coup, but failed. Traoré was executed and Conté retained power. This created some political stability, but an opposition emerged. After major strikes and political pressure, Conté announced in 1991 a plan for the introduction of democracy. A new constitution that year allowed political parties.

The opposition was divided, and there were violent clashes 1992–93. Conté won the presidential election in 1993. In 1995, several parties and organizations gathered in an opposition front. In 1998, Conté was re-elected as president, but shortly after arrest was accused of planning to overthrow the government. In 2001, the presidential term was extended from five to seven years. Conté was elected to a third term in 2003.

Guinea was involved in conflicts in several neighboring countries, which destabilized the country. About 100,000 Guineans were displaced internally by fighting in the border areas. A similar number of Guineans fled home after war broke out in Ivory Coast. In addition, there were major social and economic problems in Guinea. An armed uprising broke out in the southeast in 2005 and clashes between ethnic groups.

The deposition of two prime ministers in 2005-06 led to strikes, abuses and killings. After Conté’s death in 2008, Moussa Dadis Camara took power through a coup. His forces attacked pro-democracy protesters at a Conakry stadium, killing more than 150 people, injuring about 1,000 and raping about 100 women. Camara was shot and wounded by an assistant in 2009 and then went into exile. A civilian-led transitional government was established and the first free presidential election since 1958 was held in 2010. Alpha Condé became president. The political opposition is strong and in 2013 there were several incidents of violence.

In 2014, an Ebola epidemic developed. A minor outbreak occurred in the spring of 2016 after the World Health Organization declared Guinea free of Ebola virus the previous year.

Guinea is a resource-rich country, but one of Africa’s least developed countries. The biggest threats are political instability, the Ebola epidemic, low international commodity prices and corruption. The country’s GDP is composed as follows (2015): agriculture 19.3 per cent, industry 37.2 per cent and service industries 43.1 per cent. About 80 percent of the population is employed in agriculture.

Most of the revenue comes from mineral extraction. Guinea has 25 to 30 percent of the world’s bauxite deposits, of which it is the world’s largest exporter. There is also considerable export of alumina, gold and diamonds, and there are large deposits of iron ore, uranium, nickel and cobalt. The industry is little developed.

The main trading partner is France.

In principle, there is a six-year primary school for all children from the age of seven, but less than half attend school. High school lasts for seven years. There are two universities, in Conakry and Kankan. Only 30.4 percent of the population can read and write (2015).

Music is characterized by ethnic geographical variations. Guinea’s national dance company, Les Ballets Africains, is one of Africa’s foremost of its kind and performed in Norway in 1995.

Characteristic art products include masks and sculptures of wood.