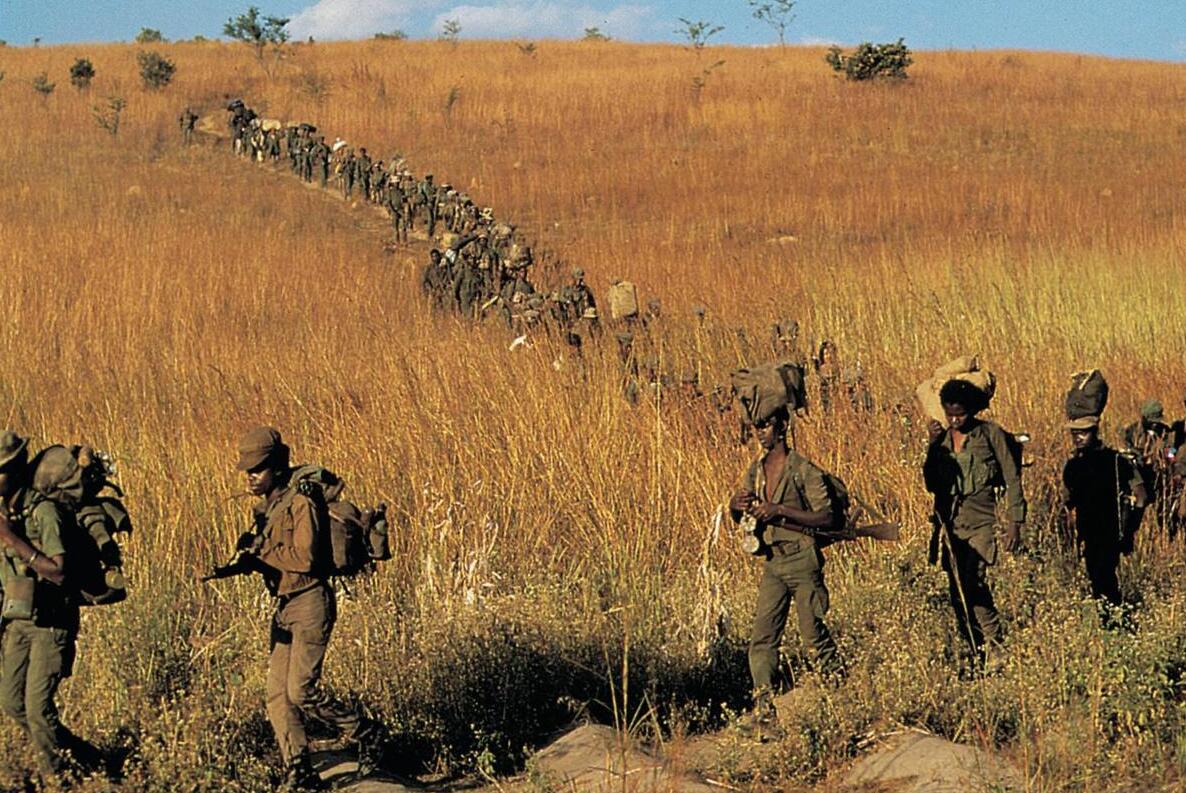 The territory that is today’s Angola is the result of compromises between the European powers during the Berlin Conference of 1885, where Portugal succeeded in claiming Angola. Portugal had established its first trading stations and colonies along the coast in the 16th century, and was particularly interested in the slave trade. Not until around the 1920s were the remains of the ancient African states and kingdoms defeated, and Portugal was able to develop an oppressive minority regime for white colonialists.

The colonial rulers had always taken advantage of the contradictions between the African peoples. These contradictions helped three liberation movements to emerge in Angola in the 1950s and 1960s. These were in turn supported by various major powers with Cold War interests. Angola’s independence was therefore marked by the liberation movement continuing the war against each other for the next 27 years.

About two thousand years ago, the first Bantu people migrated from the north and east from the areas that later became Angola. These new cultures differed significantly from the hunter and gatherer cultures that already existed there: They were settled, they cultivated the land, kept livestock and processed metals, and they had high social stratification and political organization that could embrace hundreds of thousands. Over the next fifteen centuries, new Bantu people groups from the north and east came, bringing with them different languages ​​and cultures.

There were many chief and royal judges in the area when the Portuguese arrived at the mouth of the Congo River in 1483. The most important kingdoms were Loango in today’s Cabinda enclave, Ndongo ( Mbundu ) where today’s capital Luanda is, the Lund and Ovimbundu kingdoms inland, and not least the Congo kingdom in today’s northern Angola. The king (or queen) of the mighty Congo had the title ngola, from which the Portuguese took the name Angola. Most of the kingdoms were vassals under the Congo.

Up to the start of the slave trade, Portugal’s interest in Angola had only served as an intermediary station for expeditions to the Far East. The Portuguese did not control the inland until the early 1900s, but trade with the inland empires was large, and the most important “commodity” eventually became slaves. The slaves were sought after by Portuguese plantation owners both in Brazil and in São Tomé and Príncipe, as well as other European slave drivers in America. Many millions of people were sent out as slaves from the ports of Angola from the middle of the 16th century to the late 1800s.

In 1641, a Dutch naval force captured Portugal’s most important base in Angola, São Paulo de Loanda, but the Portuguese withdrew it in 1648. In 1655, the Portuguese invaded Congo, and in the 1670s the Ndongo kingdom was defeated after a war that had been going on for 100 years..

The long Portuguese presence in Angola caused a population of Portuguese-speaking Africans (of different origins and different skin colors) to grow in Luanda, Benguela and the other coastal cities. These were linguistically, politically, economically and largely culturally linked to the growing Portuguese overseas empire, in contrast to the large agricultural-based Bantu cultures of the king and chiefdom inland.

This distinction was to become of great significance later in history, as one of the dividing lines between the various resistance movements that first fought against Portuguese rule, and then against each other (1975–2002). The urban population, often referred to as Luso Africans (or Afro-Portuguese), is unique in southern Africa, and is often considered to be the socio-cultural base of the MPLA party, which has held power in Angola since independence.

Only after 1885 did the real colonization of Angola begin, when the Portuguese also left the interior with armed force. This offensive was not least motivated by the “British ultimatum” of 1890 which pushed Portugal to occupy the interior – otherwise the United Kingdom would. Not until the 1920s was the whole of Angola under Portuguese control. During this time there was an extensive immigration from Portugal to Angola, where there were mostly 350,000 Portuguese. These dominated economic life, including practically all public positions, while Africans were forcibly recruited to work on the plantations and in public development.

The transcontinental slave trade declined sharply in the mid-1800s. Although slavery was formally abolished in Portugal in 1878, the authorities continued to assign white employers to forced black workers. In the 20th century, this took the form of “duty work”, as an alternative to monetary tax. According to official figures, in 1954 there were 379,000 contratados (contract workers) in Angola. With the exception of a few so-called assimilados (who had assimilated Portuguese language and culture), Blacks had no political rights, were virtually devoid of education and health, and were subject to a host of discriminatory laws.

Portugal gradually saw its overseas territories as integral parts of Portugal, and Angola gained its status as an overseas province in 1951. The country was rich and had one of Africa’s most developed economic infrastructure towards the end of the colonial era. Angola was thus of great economic importance to the government of Lisbon and many of Portugal’s major business enterprises. Portugal, therefore, refused to comply with the UN’s demand for peaceful decolonization. Salazar’s regime in Portugal accepted no statements, much less movement, for independence, and the secret police (PIDE) severely cracked down on all approaches to organization. This contributed to the Angolan idea of ​​independence inevitably going to underground resistance and liberation war, which broke out in 1961.

In 1954, the independence leader Holden formed Roberto União das Populações de Angola (UPA). In March 1962, the UPA was transformed into the more famous Frente Nacional de Libertação de Angola ( FNLA ). The MPLA (Movimento Popular de Libertação de Angola) claims that the party was formed by several small groups in 1956, but much indicates that the party actually worked only in the early 1960s, led by Agostinho Neto. The third liberation organization in Angola, the União Nacional de Indepêndencia Total de Angola ( UNITA ), was formed in 1966 by Jonas Savimbi.

February 4, 1961 is considered the start of the liberation war, when the Luanda main prison was stormed by unarmed civilians. The following month, extensive riots took place in northern Angola, where many Portuguese settlers were murdered. About 20,000 Africans were killed in subsequent Portuguese revenge campaigns.

Right from the start, the struggle for independence in Angola was split, and as early as 1961 there were battles between MPLA units and Roberto’s UPA. Holden Roberto originally talked about recreating the old kingdom of Congo, and had a residence in former Belgian Congo. MPLA established its headquarters in Congo-Brazzaville (formerly French Congo, now the Republic of Congo). UNITA established a good relationship with Zambia. Roberto received US financial assistance from the early 1960s. Later, he and FNLA also received financial and military support from, among others, Israel, South Africa and Zaire ( DR CongoToday). UNITA tried to exploit contact with the Portuguese colonial authorities in a joint fight against the MPLA. UNITA also received extensive material assistance from the US, China and later South Africa. The MPLA, in turn, received financial and military assistance from the Soviet and Cuba. 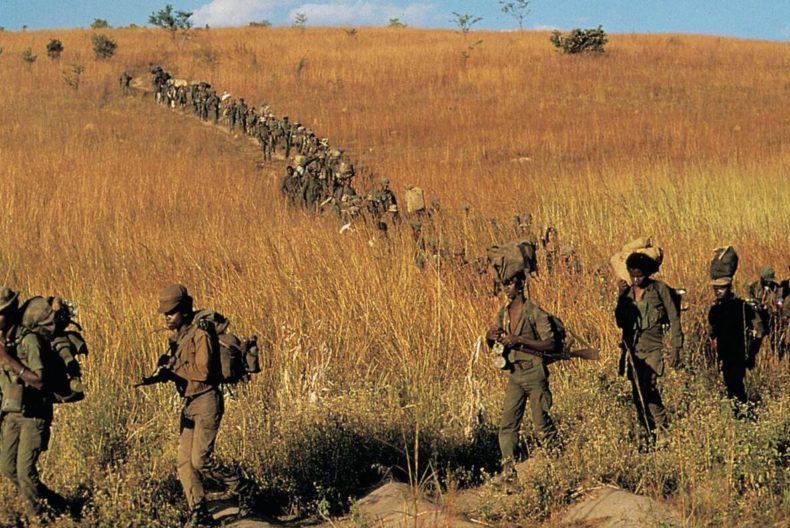 Soldiers from the Angolan rebel movement UNITA on March 1989. Despite several ceasefires and agreements, the civil war in Angola lasted until UNITA was defeated in 2002.