Although Lesotho is only as large as the federal states of Brandenburg and Berlin together, the country is still for traveler very interesting. Here you can find, for example, the highest peak in Africa south of Kilimanjaro (Thabana Ntlenyana, 3,482 m). In addition, the small and mountainous kingdom of Lesotho is the only country in the world that is more than 1,000 meters high with its entire national territory. That is why it is also called ” kingdom in the sky”. The country, which is completely surrounded by South Africa, but was never part of South Africa, lies on the highest area of ​​the Drakensberg on the eastern edge of the South African plateau. in the west Lesotho descends to gentle hills and a plain along the border. Most of the population lives here. The three major rivers Oranje, Caledon and Tugela have their sources in the mountains of Lesotho.

Lesotho is a kingdom, but currently in the political form of a parliamentary monarchy. Lesotho got its name from a simple derivation. Lesotho means nothing other than “Land of the Sotho-speaking people”.

The breathtaking landscapes make this area so impressive for visitors and travelers. The government has been trying to boost tourism in Lesotho for several decades. Because it has been recognized that it can be used to make money that the population and the entire economy of Lesotho urgently need.

The area of ​​the Maloti Mountains was selected for tourist development. A whole range of tourist attractions are now offered here. Among other things, it is possible to hike or go on a horseback ride here. Even a ski lift was installed in the Mahlasela valley. A paved downhill run is also available. With the help of investors, the aim is to expand the entire region into the largest ski area on the African continent. Numerous jobs can be created for this construction, and after the end of the construction work, new employment opportunities will be created in tourism.

Here is a detailed list of the major cities in Lesotho.

Form of government: Lesotho has been a parliamentary monarchy since 1993 and is represented in the Commonwealth. The constitution dates from 1993. The parliament has 120 members, the senate 33 members. Lesotho has been independent of Great Britain since October 4, 1966.

Lowest point: confluence of the Oranje and Makhaleng, 1,400 m

Language: The official languages ​​in Lesotho are Sesotho and English. Zulu and Xhosa are also spoken.

Local time: CET + 1 h.
In Lesotho there is no change between summer and winter time.
The time difference to Central Europe is +1 h in winter and 0 h in summer.

The Kingdom of Lesotho, completely surrounded by South Africa, has roughly the same area as Belgium, making it one of the smaller countries in Africa. Lesotho is one of the three countries in the world that are surrounded by only one other state (alongside San Marino and Vatika, both of which are surrounded by Italy) and therefore have no access to the sea. The total border length between Lesotho and South Africa is 909 km. The South African provinces to which Lesotho borders are the Free State in the west and north, KwaZulu-Natal in the east and the Eastern Cape in the south.

Here you can find a detailed topographic map of Lesotho.

The west of Lesotho is located on the Highveld, a high plateau (height about 1,400 to 1,700 m), which consists mainly of sandstone. Due to the relatively deep location within Lesotho, the plateau is called ” Lowlands “. These Lowlands are also the main settlement area in the country. The landscape is characterized by table mountains and river valleys.

The plateaus and mountains in the east of Lesotho (” Highlands “) sometimes reach heights of over 2,000 m and consist of basalt, which was created by volcanic eruptions about 170 – 150 million years ago. Numerous deeply indented river valleys and mountain ranges can also be found in the Highlands.

The Drakensberg Mountains (in Lesotho they are called the Maloti Mountains) represent an outstanding geographical element: from the southwest of the country to the north, the mountain range runs almost crescent-shaped through Lesotho. The highest elevation in Lesotho (and throughout southern Africa) is the Thabana Ntlenyana, which reaches an altitude of 3,482 m.

The lowest point in the country is at the confluence of the Oranje (which is called in Lesotho Senqu) and Makhaleng rivers at 1,400 m. It is unique in the world that the entire national territory in Lesotho is higher than 1,000 m. Around 80% of the country’s surface is even higher than 1,800 m.

The springs of the important South African rivers Oranje and Caledon are located in Lesotho. Deep canyons formed along the course of the river. There are numerous waterfalls on the edges of the Drakensberg, the Maletsunyane Falls near Semonkong being the highest in southern Africa (around 192 m high).

The bottom of the Lowveld in the west is made of relatively soft sandstone. Therefore, the erosion is quite strong here, this phenomenon is exacerbated by over-colonization and overuse of the soil (only about 10 to 20% of the country’s area can be used for agriculture). 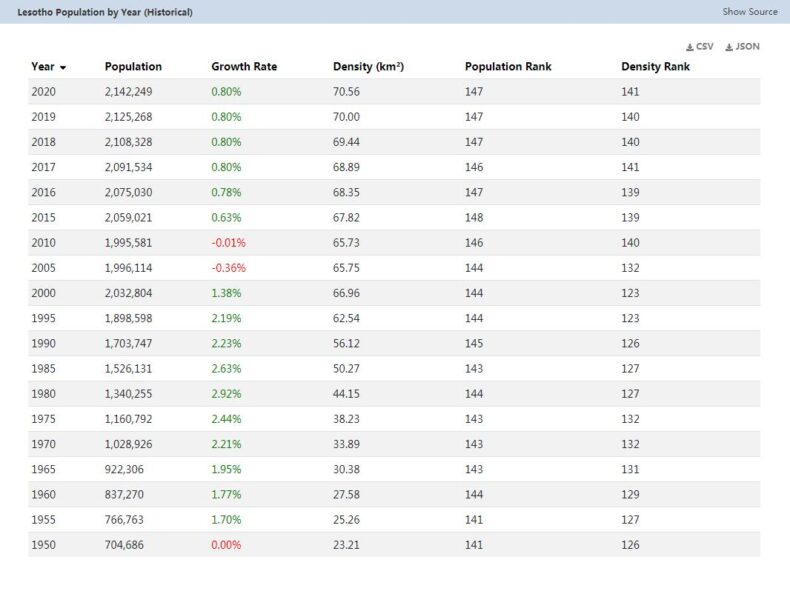