The Republic of Liberia is located in West Africa and is framed by Guinea, Sierra Leone, the Ivory Coast and the Atlantic Ocean.

From 1822 Liberia was a project for the settlement of freed colored slaves after the abolition of slavery in the United States and one of the first independent states in Africa. The name also comes from this period – after the Latin word liber for “free”. However, conflicts quickly arose between the former slaves and the indigenous peoples. These conflicts have shaped Liberia to this day. However, there is a glimmer of hope: after more than ten years of civil war, the democratic election of the new President Ellen Johnson-Sirleaf in November 2005 laid the foundation stone for a democratic new start for Liberia.

When the situation in Liberia stabilizes, travelers will be able to discover a fascinating country: A dense rainforest is home to hundreds of bird species, forest elephants, chimpanzees and pygmy hippos. On the coast there are lonely, white, sandy beaches with river deltas and lagoons, while the cultural traditions of Liberia such as the carving of masks are still alive inland.

The population of Liberia is exceptionally diverse. Population groups with a wide variety of cultural backgrounds live here. A small percentage of people are Creoles or American Liberals, this group is predominantly Christian. In total there are between 15 and 20 ethnic groups in Liberia. The peoples of the Kpelle, Bassa, Kru, Grebo and Gio have the largest share. This is followed by Mano, Vai and numerous smaller groups. In addition, about 8,000 Lebanese live in Liberia.

The different population groups in Liberia also use different languages. Most people in the north and west speak Mande. The east and south belong to the Kru language group. Only 2.5% of Liberia’s residents speak the official language, especially the descendants of former slaves from the United States.

Population: 3.79 million people (July 2011, COUNTRYAAH.COM). Composed of 16 different races, 95% of which are native (including Bassa, Kpelle, Kru, Gio, Mano, Grebo, Gola, Krahn, Loma, Gbandi, Vai, Kissi, Bella, Dei, Mende and Mandingo), 2, 5% are descendants of slaves from America, also known as Ameriko-Liberians and 2.5% are descendants of slaves from the Caribbean.

Here is a detailed list of the major cities in Liberia.

Form of government: Liberia has been a presidential republic (and thus the second oldest independent African state) since 1847, the constitution dates from 1984. The bicameral parliament consists of a house of representatives with 64 members and a senate with 15 members.

Head of government and Head of state: President Ellen Johnson-Sirleaf, since January 16, 2006.

Language: The official language in Liberia is English, but this is spoken by only about 30% of the Liberian population. About 20 African languages ​​such as Golla, Kpelle, Mande and Kru are spoken in the country.

Religion: 40% Christians, more than 40% followers of natural religions and about 20% Muslims

Local time: CET – 1 h.
In Liberia there is no change between summer and winter time.
The time difference to Central Europe is -1 h in winter and -2 h in summer

Liberia is located in southwest Africa on the Atlantic coast, the neighboring countries are Ivory Coast in the east, Guinea in the north and Sierra Leone in the northwest.

Here you can find a detailed topographic map of Liberia.

In Liberia, three landscape zones run more or less parallel to the coast:

The coast consists of more than 50% sandy beaches and is characterized by lagoons, bays and mangrove swamps. With the exception of three rocky capes, it is a flat area.

Most of Liberia is located on a plateau (500 – 800 m) with tropical rainforest that rises inland, most of which has been cleared. The interior of Liberia consists largely of mountainous areas. The highest point is Mount Wuteve (1,380 m) in the Nimba Mountains, which continues to Guinea.

About 15 rivers drain the country, most of them in a southwesterly direction. The main rivers are the Moro and the Gbeya (which together form the Mano), the Loffa, the St.Paul and the Cavally. Rapids and shallows make many rivers unusable for shipping. However, they are suitable for the generation of hydroelectricity.

This map of the population distribution in Liberia was created by the Worldmapper team. Densely populated areas appear bloated, the area of ​​sparsely populated areas is reduced. The shape of the grid has been preserved; an underlying map with the original geographical extent helps interpret the map. The distorted map should help to present abstract statistical information clearly. 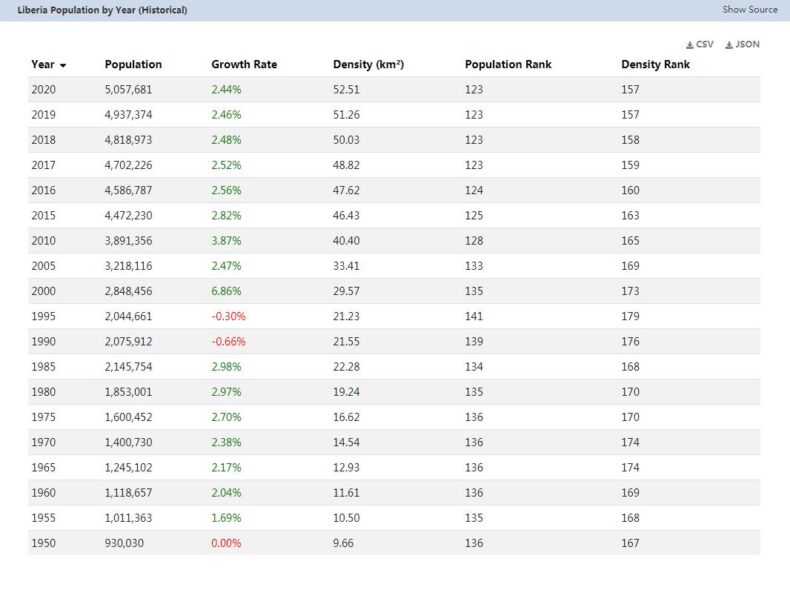 Passport: is generally required for travel to Liberia, the passport must be valid for at least 6 months when entering Liberia.

Transit: Transit travelers who continue to travel within 48 hours, cannot leave the transit area and can present valid onward flight tickets do not need a transit visa for Liberia.

Validity: 3 to 12 months (an extension in Liberia is possible). The journey must be started within 60 days of the visa being issued.

Application: In person or by post at the consulate or the consular department of the embassy (see Liberia – important addresses).

A postage-paid and addressed envelope should be included when applying by post.

Visa fees when applying in Germany:

Processing time: about one to two weeks.

Vaccinations: Information on international vaccination certificates that are required for entry can be found in the Liberia – Health chapter.

Residence permit: applications before entering the Ministry of Foreign Affairs in Monrovia.

Exit permit: At least 7 days before departure, all foreigners who have been in Liberia for 15 days or longer must apply for an exit permit at the Immigration Office.