Travel to Madagascar is vastly different from safaris in continental Africa. On Africa’s largest island, in addition to tropical beaches and crystal-clear water with species-rich coral reefs, there is also dense rainforest with countless rare animal species (including lemurs and other semi-monkeys that only live here). Because of its unique flora and fauna, its varied landscapes and climates, but also because of the tasty Madagascan cuisine and the accommodating nature of the residents, Madagascar is considered as destination more and more popular.

The flora and fauna of Madagascar is the same unique that you have to highlight them clearly. The island was once completely forested. Then the first settlers hit the area and started deforestation. Today, only a terrifying 4 percent of the enormous area of ​​the rainforest remains. Anyone who travels to Madagascar and large areas of rainforest (for example on the Masola Peninsula) will find it difficult to imagine how huge this area must have been before deforestation and clearing. The government is endeavoring to afforest the former forest regions, unfortunately the results have so far not been achieved.

The tropical lowland rainforest, which still covers the coastal zones, is particularly attractive. Here you can discover the typical, large trees of the rainforest. Underneath, close to the ground, grow impressive ferns, which due to the climate find excellent conditions for their growth.

The climatic conditions in Madagascar are very different. The rainforest slowly changes from east to west to a wet savannah, which in turn merges into a dry and thorn savannah.

The animal world is as varied as the plant kingdom. The fossa, nimble, agile and carnivorous animals, scurry around the entire area. The Fanalokas (predators that resemble a genet) are still at home here. There are no venomous snakes in all of Madagascar. This makes a visit to the rainforest more pleasant for tourists, who often fear being bitten by a poisonous snake.

Here is a detailed list of the major cities in Madagascar.

Form of government: Madagascar has been a republic (so-called 3rd republic) since 1992, the constitution dates from the same year. The bicameral parliament is made up of the National Assembly with 160 members and the Senate with 100 members. A third of the Senate members are appointed by the head of state. Madagascar has been independent of France since June 26, 1960.

Local time: CET + 2 h.
There is no changeover between summer and winter time in Madagascar.
The time difference to Central Europe is +2 h in winter and +1 h in summer.

Madagascar is the fourth largest island in the world after Greenland, New Guinea and Borneo and by far the largest island in Africa. It is also called the “eighth continent”. This term refers less to the size of the island than to its long isolated development, which gave rise to a very independent nature: Madagascar was separated from Africa 150 million years ago and from India 90 million years ago. Until 2000 years ago, Madagascar was not populated by humans.

The island is located in the Indian Ocean and is separated from East Africa by the Mozambique Strait. The distance to the African mainland is 400 km.

Here you can find a detailed topographic map of Madagascar.

The central, Madagascar, m is a plateau with heights 800-1600. This Hauts Plateaux covers about two thirds of the island and is one of the reasons for the ethnic, climatic and landscape differences of the west and east coast. It falls steeply and steeply to the east, while the rise in the west is gentler. To the north of the capital, the highlands are not forested, in the south it is covered by forest. The plateau reaches its highest point in the northern volcanic massif of Tsaratanan with the Maromokotro, the highest mountain on the island at 2,876 m.

The northern highlands are a fertile region where vanilla, coffee and sugar cane are grown.

The capital Antananarivo lies high in the Hauts Plateaux, close to the center of the island.

The highlands drop in stages towards the west coast. This region was covered with dry deciduous forest in the past, but has hardly any trees left and consists almost exclusively of savannah. Due to the lack of vegetation protection, erosion causes great damage.

The east consists of mountain slopes covered with rainforest and a 10 to 50 km wide, flat and fertile strip of land in which coffee is planted, among other things. The Ampangalana Canal, which is the only year-round connection to the other parts of the country, runs inland along the coast. The infrastructure in this region is relatively poor.

The south is dry, hot and covered by savannas and semi-deserts. This is the region in Madagascar that is best developed for tourism.

The island of Nosy Be (translated large island) is located in the northeast of Madagascar at a distance of 8 nautical miles. Its area is 325 sq km.

This map of population distribution in Madagascar was created by the Worldmapper team. Densely populated areas appear bloated, the area of ​​sparsely populated areas is reduced. The shape of the grid has been preserved; an underlying map with the original geographical extent helps interpret the map. The distorted map should help to present abstract statistical information clearly. 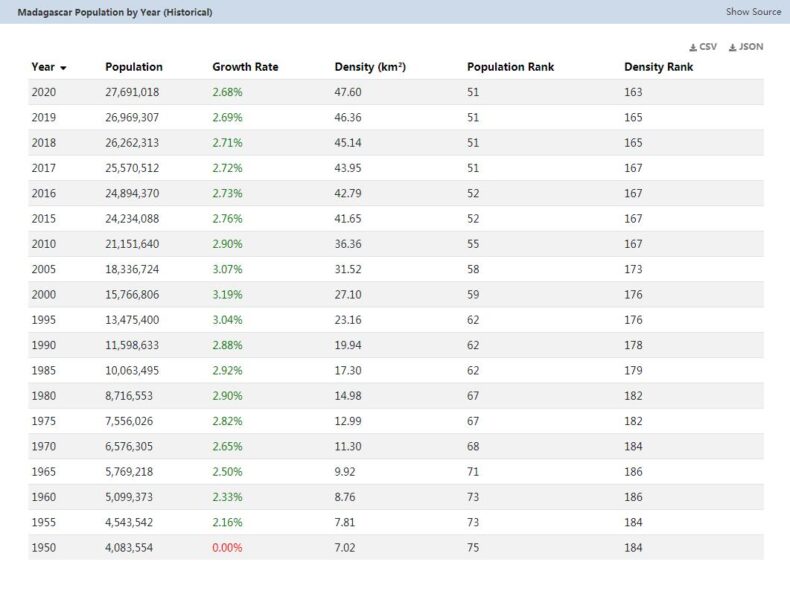 Passport: A passport is required to enter Madafgaskar, the ID card is not sufficient. The passport must be valid for at least 6 months upon entry and have a blank page.

Visa: Generally required. It can also be bought directly at the airport and costs 140,000 ariary (around 48 euros).

Transit: Transit travelers who fly within 24 hours, have valid documents for the return or onward journey and reserved seats and do not leave the transit room do not need a transit visa.

Period of validity: Visas are valid for 6 months from the date of issue and entitle you to a stay of up to 90 days, extension on site for another 30 days.

Documents: passport, is still valid for at least 6 months – 2 personally completed visa applications (no copy, no fax) – 2 passport photos in the format of 3.5 cm X 4.5 cm as photo print (scans or copies are not permitted) – proof of valid international health insurance – proof of the booked and paid return or onward journey – fee

Business Visa: additionally a company letter from the German company about the purpose and duration of the trip with a confirmation of the assumption of costs.

A franked and addressed envelope and proof of payment of the fees (in cash, by check or transfer to the account Deutsche Bank AG, Berlin, account number: 0669150, bank code: 10070000) must be attached to the application by post.

Vaccinations: Information on international vaccination certificates that are required for entry can be found in the chapter Madagascar – Health.

Entry with pets:
Before importing a pet, an import permit must be obtained from the Directeur du Service de l’Elevage et de la Pêche Maritime de la République Démocratique Malgachebe requested. In addition, a certificate of health is required from the official veterinarian of the country of origin, which was issued less than 15 days before entry, detailing the animal, listing its owner and certifying that the animal is healthy and the place of origin is without infectious diseases. For dogs over 3 months and for cats over 6 months, this health certificate must also confirm that the animal has been vaccinated against rabies at least one month and a maximum of one year before entry and for dogs over 6 months at least 3 months and a maximum of 3 years before entry.
The animals to be imported are examined when entering Madagascar. Quarantine may be imposed.