Mozambique extends on the southeast coast of Africa on the Indian Ocean, neighboring countries are South Africa, Swaziland, Zimbabwe, Zambia, Malawi and Tanzania.
Already in the 9th and 10th centuries there were many trading cities, where Arab merchants also lived. Of the trade mainly focused on gold, ivory and slaves. Trade relations reached as far as India and China. The dominant in this region was the Monomotapa Empire, which peaked in the 13th to 15th centuries and existed until the 18th century.

The islands of Magaruk, Benguerua and Basaruto off the Mozambican coast are interesting destinations for travel and vacation in Mozambique due to the abundance of fish, the diving opportunities on the coral reefs and the white sandy beaches.

The national parks such as the three-country national park Limpopo with big game such as giraffes, elephants and lions are among the main tourist attractions. The Gorongonsa National Park is also worth a visit.

A visit to the Cabora Bassa dam, which builds up the Zambezi for a length of 240 kilometers, is worthwhile, as is the archaeological site of Manyikoni in southern Mozambique.

The Portuguese founded a commercial branch on the island of Ilha de Mozambique in 1507. The architecture of the island still shows traits of the colonial period. These magnificent buildings were added to UNESCO’s World Heritage List in 1991.

Mozambique is little developed for tourism. If you are looking for a hotel in Mozambique for a holiday or a longer stay, you have to do a lot of research. However, there are already approaches to expanding tourism in the country. More and more investors are interested in building hotels, holiday apartments and apartment complexes in Mozambique. The infrastructure in Mozambique is also currently being expanded and the road network expanded.

Here is a detailed list of the major cities in Mozambique.

Form of government: Mozambique has been a republic since 1990 and has been represented in the Commonwealth since 1995. The constitution dates from 1990. The parliament is made up of 250 members who are elected every five years. The first post-civil peace agreement between the Mozambican government and right-wing Renamo rebels, including those supported by South Africa, was signed in 1992, and the country’s first free presidential and parliamentary elections were held in 1994. General Chissano emerged victorious from them, and was re-elected in 1999. In 2004 the FRELIMO candidate Guebuza won.

Mozambique has been independent of Portugal since June 25, 1975.

Local time: CET + 1 h.
In Mozambique there is no change between summer and winter time.
The time difference to Central Europe is +1 h in winter and 0 h in summer.

Mozambique is bordered in the north by Tanzania, in the west by Malawi, Zambia and Zimbabwe and in the south by South Africa and Swaziland. The Indian Ocean is located in the east of Mozambique.

The surface design of Mozambique is very varied. It can be divided into four zones according to the breakdown: the lowland zone on the coast, which occupies 44% of the country, the lower plateau areas of 200 – 500 m high, which follow the coastal lowlands inland, and the higher plateau areas of 500 – 1,000 m, which make up about 26% of the country, and in the mountainous region, which is mostly on the edge and reaches heights of over 1,500 m.

Here you can find a detailed topographic map of Mozambique.

A wide coastal lowland lies along the 2470 km long coast of Mozambique; it covers most of the south, but it narrows to the north from the Zambezi estuary.

In the south, the coastal shape is largely a relatively straight compensation coast with offshore islands, lagoons and sometimes dune strips. In the northern part of the coast there are also steep cliff coasts. A coastline accompanies the coast, which is occasionally preceded by coral islands and reefs. Some bays that open to the north due to the south current on the balancing coast structure the generally straight coastline. The most striking is the Bay of Maputo.

The geological zone mainly consists of younger, tertiary and quaternary deposits, but also layers from the Middle Ages and even older gneiss-granite rocks.

Behind the coast, the land rises gradually up to the plateau of the high field, which is 1,000 m high. The highest mountain is Monte Binga in the province of Manica (on the border with Zimbabwe) with 2,436 meters.

The more envious plateau regions are faintly undulating, mostly consist of granite and gneiss and, especially in the north of Mozambique, where this landscape is very broad, form many striking mountains made of hard, resistant rock.

The plateau areas with heights of 500 – 1,000 m are part of the old African mass like the mountainous countries of Mozambique and also mostly consist of granite and gneiss. The mountain ranges (e.g. the Lebombo Mountains on the border with South Africa) are mostly parts of mountain systems that reach into the neighboring countries.

The country’s numerous rivers flow eastwards from the highlands into the Mozambique Strait. The largest river is the Zambezi, which is dammed in its upper reaches by the Cabora Bassa Dam, the Zambezi, which flows into the Indian Ocean approximately in the middle of Mozambique, forms a delta with numerous water veins and swamped flood plains.

Other large rivers are the Rovuma, the border river to Tanzania, and Sava and Limpopo. Lake Malawi forms part of the border with Malawi. Its outflow is the Shire, which flows into the Zambezi.

This map of the population distribution in Mozambique was created by the Worldmapper team. Densely populated areas appear bloated, the area of ​​sparsely populated areas is reduced. The shape of the grid has been preserved; an underlying map with the original geographical extent helps interpret the map. The distorted map should help to present abstract statistical information clearly. 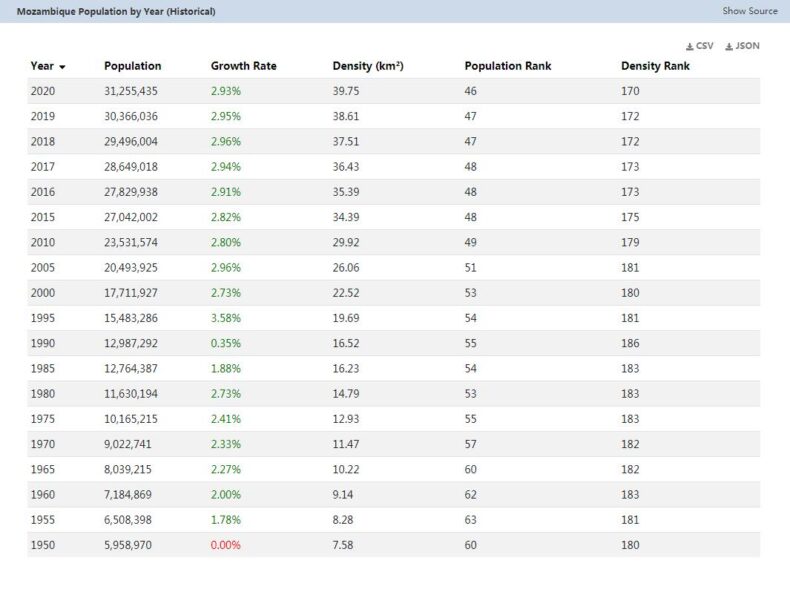