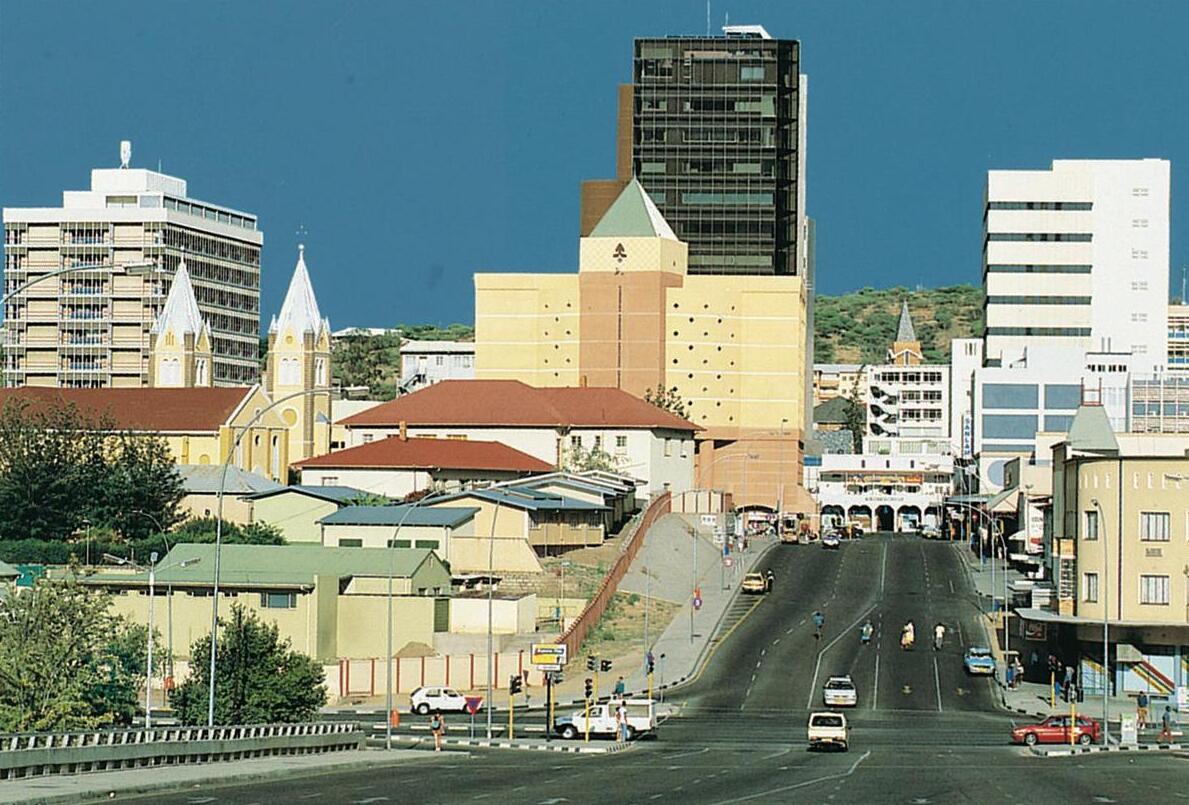 Namibia, Republic of Southwestern Africa. Namibia borders Angola to the north, Zambia and Botswana to the east, and to South Africa to the south and southeast. In the west, Namibia has a coast to the Atlantic.

A large part of Namibia is inhospitable desert, and the country has the second lowest population density in the world. Namibia became a German protectorate in 1884. After the First World War, the colony was placed under South African administration. In 1990, Namibia became independent after a protracted liberation struggle.

The country is named after the Namib Desert, which dominates the Namibian landscape. The name comes from the khoikhoi word namib, which means “empty area”.

The national anthem is called “Namibia, Land of the Brave”. It was the winner of a competition when Namibia needed a new national anthem after the country became independent, and was written by composer Axali Doëseb. 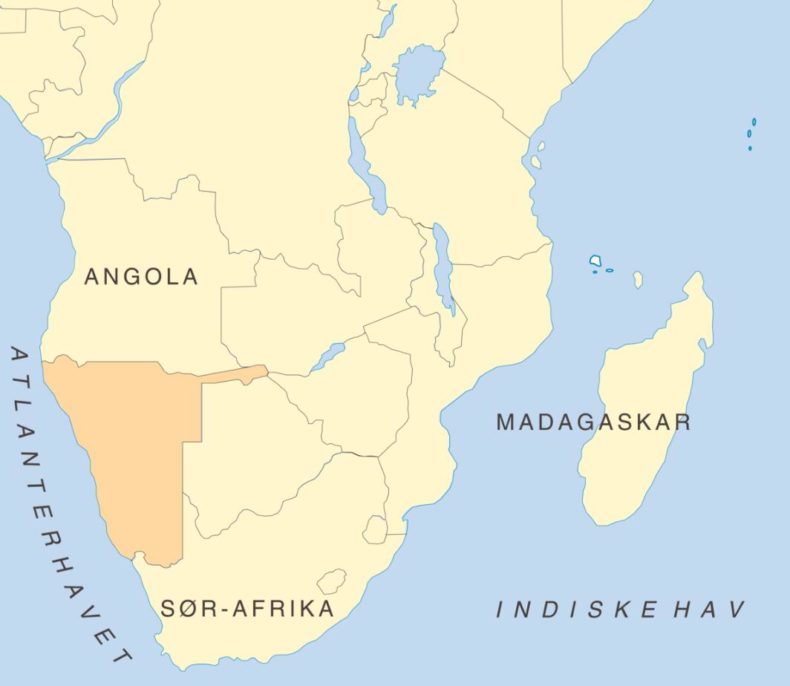 With its 2.3 million people spread over 823,000 square kilometers, Namibia is the country in the world with the second lowest population density after Mongolia. About six percent of the population is white descendants of Europeans and 6.5 percent are of mixed descent, while the rest are African.

About 90 percent of the population is Christian in various variants (51 percent are Lutherans), while ten percent belong to different traditional faiths.

38.4 percent of the population lives in cities. The capital Windhoek is the largest city, with 380,000 inhabitants.

Namibia is one of the countries in the world most affected by HIV and AIDS. Although the proportion of people with HIV / AIDS has decreased since the 2002 peak, 13.3 percent of the adult population was infected in 2012. Nearly 17 percent of children under 18 have lost one or both parents due to AIDS.

Namibia is a democratic republic where the president is both head of state and head of government. The Constitution was written in 1990.

The president is elected for five-year terms and appoints a prime minister and government. Although the Constitution is to formally secure a formal division of power, Namibia has been criticized for interfering with state powers, since all the members of the government are also members of the National Assembly.

The judiciary is based on the Dutch variant of Roman law. The Supreme Court judges are appointed by the President.

The country is a multi-party democracy, but the Swapo Party, the successor to the South West Africa People’s Organization ( SWAPO ) liberation movement, has dominated politics since independence. The country’s first president was Sam Nujoma, who sat for three terms. In 2005 he was succeeded by current President Hifikepunye Lucas Pohamba.

In 2013, Namibia was named Africa’s best emerging economy – and number 13 in the world – by Bloomberg News Agency. It is also the country in the world with the greatest economic inequality. The gyno coefficient is at 0.5971 according to the World Bank.

Compared to other countries in the region, Namibia has relatively little corruption. Namibia is number 57 on the Transparancy International Corruption Perceptions Index, a place the country shares with the Czech Republic, Croatia and Bahrain.

The mining sector accounts for 25 per cent of the state’s revenue, and diamonds account for a large part of this.

Namibia is the world’s fourth largest producer of uranium. Other minerals that are mined are copper, lead, zinc, silver and tungsten. Although the mining sector is so central to the Namibian economy, it employs only three percent of the workforce.

Almost half of the population lives on agriculture, and largely self-storage farms. Only one percent of the land is arable land and half of the land is run by about 4,000 commercial farmers, most of them white. Namibia is embarking on a land reform program to redistribute part of the commercial land.

Overfishing meant that fish stocks off the coast were very low when Namibia became independent, but have picked up considerably since then because the country has actively restricted fishing. Today, fishing is the fastest growing industry in the country.

Tourism employs 18 percent of the workforce and accounts for 14.5 percent of GDP. The tourists come first and foremost to see nature and wild animals.

Namibia has ten years of compulsory education. The children start at a seven-year primary school when they are six years old. Then follows a five-year high school from eighth grade to twelfth grade. After completing tenth grade, students receive a final diploma and may choose to continue for another two years.

Namibia has several public higher education institutions. The two largest are the University of Namibia and the Polytechnic of Namibia. 89 per cent of the population over the age of 15 can read and write.

Freedom of the press is enshrined in the Constitution and Namibia is regarded as one of the countries in Africa with the best conditions for the press, although the Freedom House organization has expressed concern that the government has too much influence on the state broadcaster NBC (Namibian Broadcasting Corporation).

There are a number of private radio channels. In addition to the NBC television broadcasts, many have access to South African and international cable and satellite TV channels.

German-speaking Allgemeine Zeitung is the oldest newspaper in the country, while English-speaking The Namibian is the most widely read.

The poet Hans Daniel Namuhuja (October 22, 1924 – July 23, 1998) was the first author published in the language oshiwambo. The Purple Violet of Oshaantu by Neshani Andreas is the Namibian novel that has received the most attention internationally.

Namibia has a variety of different folk traditions. The Herero people have their oviritje, which was traditionally only performed as a song, but modern practitioners have used other instruments as well. Ovambe, the largest ethnic group, plays a type of dance music called shambo, which is also further developed in several modern forms, inspired by reggae and South African kwaito, among others. African music, based on Dutch folk music, is also widespread.

There is also a lot of modern pop music produced that blends local music with different western styles. Reggae artist Ras Sheehama and the late gospel singer Jackson Kaujeua are among the most popular contemporary artists. Rapper Sunny Boy is known as the creator of the hip-hop variety hikwa.

Namibia had 305,578 Internet users on December 31, 2013, according to the Internet World Stats website. This is equivalent to 13.9 per cent of the population.