The Republic of Niger is a multinational country with a large population cultural heritage. Black Africans live alongside Tuareg, Fulbe and Arabs. All wear with their customs and costumes, with theirs culture and architecture add to the fascination of Niger.

As a link between the northern Sahara countries and sub-Saharan Africa, it combines negroid peoples such as Tubu, Kanuri, Fulbe and Haussa with the fair-skinned Tuareg peoples, who are probably the best known of all nomadic Saharan peoples. Respected, feared and romanticized as warriors and robbers in the 19th century, the “Knights of the Desert” are still seen as “nomads”. Proud of their history and traditions, the Tuareg call themselves Imuhar or Imajeren, which means “free” or “independent”. Their independence and mobility is made possible for the desert nomads primarily by their camels.

As a World Heritage Sitethe Air and Tenere nature parks and the “W” national park are recognized. In addition, Niger offers a fertile Niger plain with an abundance of wildlife and, above all, impressive desert landscapes. The Niger River is a source of life and transport for the country. There are still many hippos and a rich bird life here.

The Gerewol festival of the Peul Bororo nomads is particularly impressive. The highlight of this meeting is the well-known beauty pageant of young men who seek women’s favor. They also decorate, style and make-up and dance to mysterious chants.

In Niger, most people in the population belong to Islamic culture. For this reason, Islamic holidays such as the end of Ramadan, the festival of sacrifice and Muhammad’s birthday are taken very seriously and celebrated accordingly. These holidays do not take place on the same day every year because they are calculated based on the lunar calendar. As a result, the Islamic festivals are postponed by a few days each year.

Here is a list of the 50 largest cities in Niger.

Form of government: Niger has been a presidential republic since 1960. The constitution dates from 1999. The parliament is made up of 83 members. Niger has been independent of France since August 3, 1960.

Language: The official language in Niger is French. The colloquial languages ​​are Haussa (for about 65% of the population) and Tamaschagh, a Tuareg dialect, Songhai-Jerma and Fulbe.

Local time: CET.
There is no changeover between summer and winter time in Niger.
The time difference to Central Europe is 0 h in winter and -1 h in summer.

Niger borders Libya and Algeria in the north, Chad in the east, Nigeria and Benin in the south and Mali and Burkina Faso in the west. These countries form the Sahel region, which has been hit by periods of drought since the late 1960s.

Here you can find a detailed topographic map of Niger.

The center of the country is semi-arid and sparsely overgrown with trees. The capital Niamey on the north bank of the busy Niger has long been an important trading center. The only river in the country that carries water all year round flows through the west of Niger over a distance of 450 km.

In the south, on the Nigerian border, there is a fertile, forested savannah area that benefits from the sufficient rainfall here and the Niger, which regularly overflows its banks. The Niger who gave the country its name is actually only grazing the country.

The Ténéré desert already occupies more than half of the country’s area. It is crossed by a flat mountain range, the Aïr ou Azbine . On the southern edge of the desert is Agadez, in the past an important caravan city, surrounded by fertile valleys and hot springs. The rubble desert east of the mountain range changes into pasture during the rainy season.

The north and west consist largely of large sandy areas that are only interrupted by the Aïrmassiv and the Tibesti Mountains.

In the southeast, the country shares in one of the largest lakes in Africa, Lake Chad, which, however, is only very shallow.

97% of Niger’s residents live in the fertile Niger Plain.

This map of the population distribution in Niger was created by the Worldmapper team. Densely populated areas appear bloated, the area of ​​sparsely populated areas is reduced. The shape of the grid has been preserved; an underlying map with the original geographical extent helps interpret the map. The distorted map should help to present abstract statistical information clearly. 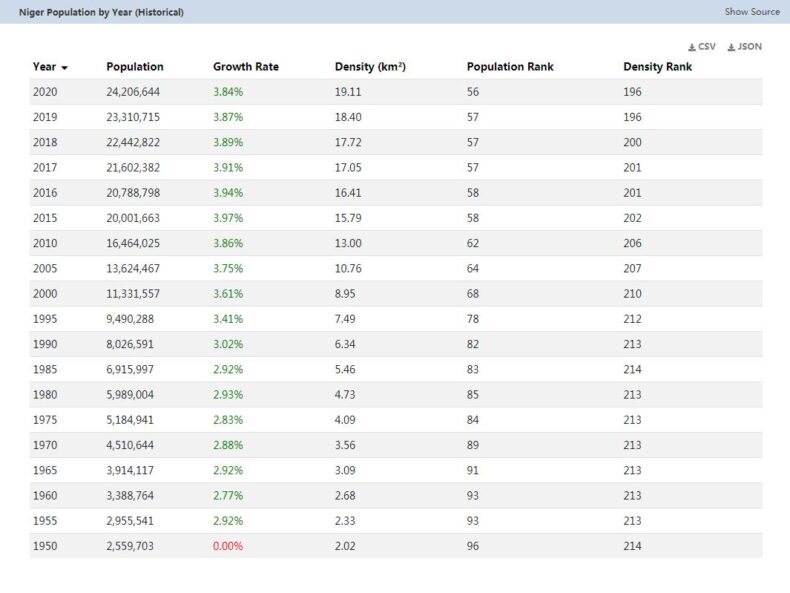 Passport: is generally required for trips to Niger, the passport must be valid for at least 6 months after the visa expires.

Visa: Generally required, of European countries only Denmark and Finland are exempt from the visa requirement.
The passport must be presented to the local police at each overnight location.

Transit: Transit travelers who continue to travel within 24 hours, can present valid documents for the onward journey and do not leave the transit room do not need a transit visa.

Validity: A maximum of 3 months from the date of issue.

Documents: Tourist visa: 2 originally filled out application forms (no copy, no fax) – 2 passport photos (no scans) – passport that is still valid for at least 6 months – travel booking confirmation. Business visa: additionally a company letter from the German company about the purpose and duration of the trip with a confirmation of the assumption of costs.

If you are traveling with your own vehicle, you must fill out another form (Authorization de Passage) and enclose a third passport photo.

A stamped envelope and proof of payment for the visa fee (copy of postal order or check) should be attached to the application.

Documents on entry: The following documents must be presented on entry: Proof of valid yellow fever vaccination – return or onward travel ticket – tourists arriving by land: proof of the willingness of a recognized bank to cover the return flight costs in an emergency (translation in French) as well as proof of a valid liability insurance for vehicle owners – proof of taking out travel insurance – proof of sufficient funds.

Residence permit: Must be applied for in Niger at the Ministry of the Interior in Niamey.