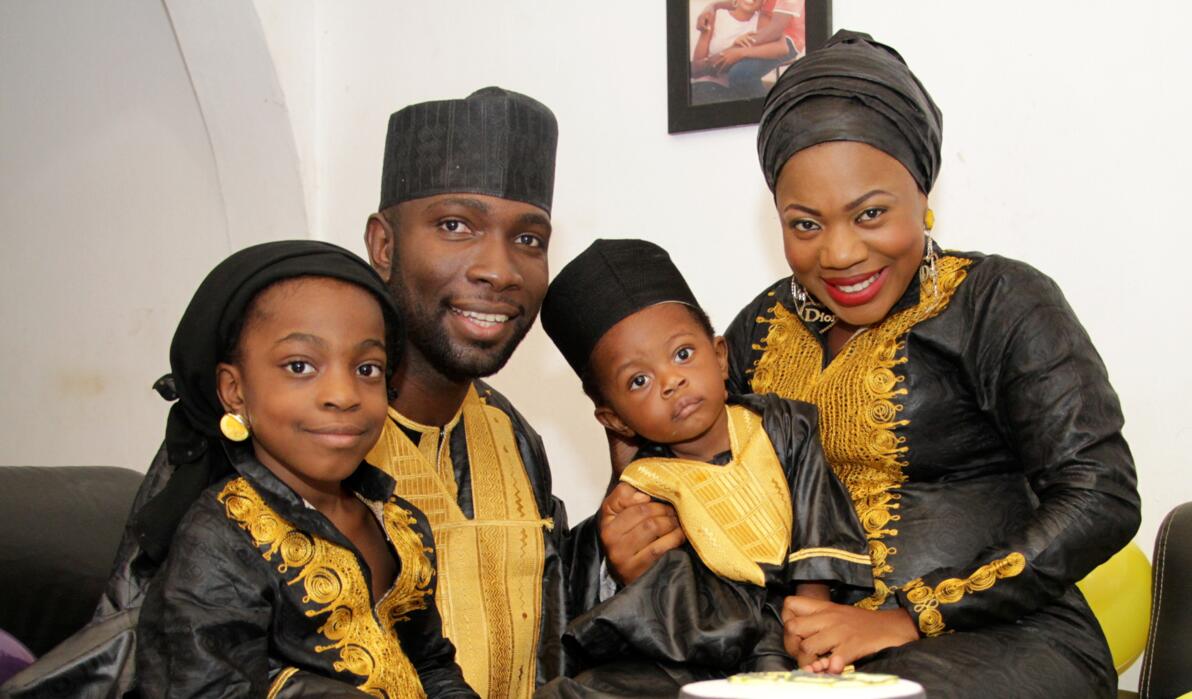 Nigeria is a republic in West Africa, on the Gulf of Guinea, borders east to Cameroon, northeast to Chad, north to Niger and west to Benin.

Nigeria is Africa’s most populous state with over 180 million people. There are over 200 ethnic groups with their own languages. The largest and dominant groups are yoruba, hausa and ibo. English is the official language.

Due to its population, military strength and economic position, Nigeria is considered one of Africa’s great powers, often along with South Africa. Nigeria is Africa’s largest oil producer. Oil revenues have greatly affected Nigeria’s development, including a significant modernization of the economy, but they are linked to widespread corruption. Agriculture employs most of the population, and the country previously had significant exports of agricultural products.

Ethnic, religious and regional contradictions in the country are great, and have marked their political development. After independence from Britain in 1960, the country has undergone a series of military coups and had 28 years of military rule. In 1967, the inhabitants declared the eastern part of Nigeria as an independent republic under the name Biafra. After three years of civil war (the Biafra War 1967-1970), the area was again incorporated into Nigeria. Nigeria has enjoyed peace and formal democracy since 1999, but has been characterized by a number of conflicts, widespread violence and the conduct of elections has been strongly criticized, though gradually improved.

The name is derived from the river name Niger, from the tuaregord n’higren, ‘flowing water, river’. The national anthem is Arise, O Compatriots, Nigeria’s Call Obey.

Nigeria’s area is about three times the size of the United Kingdom, and the country spans several different natural geographical areas. The Niger Delta of the Gulf of Guinea is characterized by mangrove swamps. Tropical rainforests grow within the coastal plain. The rest of the area in the southeast consists mainly of dense forests that grow up against mountains and plateaus in the Middle Belt. On the central Jos Plateau there are remains of volcanoes, the highest peak being 1780 meters above sea level.

Also in the east, at the border with Cameroon, there are mountains. Here is Chappal Waddi, Nigeria’s highest mountain, which reaches 2419 meters above sea level. Further north there are savannah plains and all the way in the northern peninsula of the Sahel. West Africa’s most important river, Niger, runs through the country and flows into the Gulf of Guinea through the vast Niger Delta.

In the north, climate change and population growth lead to desertification, which in turn leads to land pressure and conflict between nomadic groups and residents, especially in the Middle Belt. Human Rights Watch reported in 2015 that since 2010 more than 4,000 were killed in these conflicts, and over 120,000 were displaced. In the Niger Delta, oil recovery has caused enormous environmental damage that threatens animal, fish and plant life, and the livelihood of people. This has also led to repeated conflicts. Climatically Nigeria has two seasons: wet (May-October) and dry (November-April).

The population was estimated to be just under 182 million by the middle of 2015. Half of Nigerians live in cities and the population is very young (43 percent are under 15, 19 percent are aged 15-24). Nigeria is Africa’s most populous country with a population growth of about 2.5 percent. By 2050, the UN expects Nigeria to bypass the United States as the world’s third most populous, which is expected to have just under 400 million inhabitants.

The three largest and dominant ethnolinguistic groups are Yoruba in the southwest (21 per cent), the Hausa in the north (20 per cent) and ibo in the southeast (18 per cent). Hausaene in north discussed most often with Fulani (9 percent), Hausa-Fulani. Different sources state different numbers of languages ​​(from 200 to 500) and ethnic groups (200 to 250) in the country. English is the official language. Resources and wealth are extremely unevenly distributed between and internally in regions. Both the proportion of poor and the number of absolutely poor are increasing. The proportion of people living on less than one USD per day increased from 52 to 62 per cent in the period 2004-2010. Conservative estimates indicate about 25 percent unemployment.

Nigerians often refer to themselves as strongly religious. Figures on distribution between Christians, mainly in the south, and Sunni Muslims, mainly in the north and among Yorubans, are highly controversial, and there are no updated figures. In Nigeria, most often talk about 50-50 percent distribution, while other sources say that about 50 percent are Muslims, 40 percent are Christians and 10 percent belong to local religions.

Nigerian couple with their children, all wearing traditional Hausa suits with modern touches.

Nigeria is a Republic and since 1999 has been a constitutional democracy with elections every four years, most recently in 2019. The period after 1999 is referred to as the Fourth Republic and is the longest period of civil rule in Nigeria’s independent history. The elections have been characterized by violence and corruption, but with gradual improvement after the most contentious elections in 2007.

Nigeria has a strong federal system, with 36 states governed by elected governors. Regional, religious and ethnic identities are heavily politicized. A balance of power between especially the north and south is considered important for the country’s political stability. This is also reflected in the leadership of the major parties. Corruption is a widespread part of Nigerian politics.

Muhammadu Buhari of the APC (All Progressives Congress) won the 2015 presidential election over incumbent President Goodluck Jonathan of the PDP (or The People’s Democratic Party, see Abbreviationfinder). He was re-elected on February 23, 2019, against PDP’s Atiku Abubakar. The 2015 election thus broke the PDP’s power monopoly of 1999, and is referred to as an important step towards strengthening Nigerian democracy. The 2019 election had a record number of parties (over 90) and 73 presidential candidates, but was in fact a choice between two candidates and two parties. It is possible the country is developing towards a two-party system.

Nigeria is an African power political, economic and military, and plays a key role on the continent and in the region, especially through the African Union (AU) and the Economic Community of the West African States (ECOWAS). Due to the country’s oil resources, size and role in the war on terror, the country is given high priority by the United States, among others. 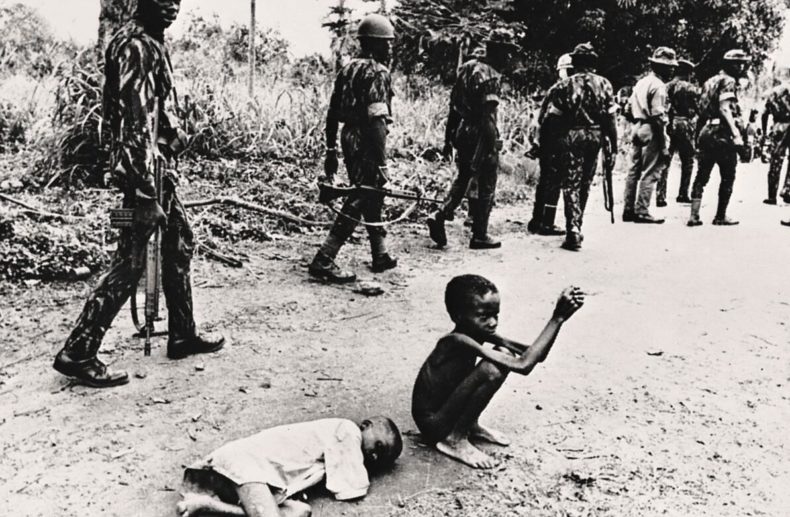 From the Civil War in Biafra, 1967-70. About. one million residents of Northern Nigeria fled to the eastern region, which in 1967 tore itself apart from the rest of Nigeria and took the name Biafra. Nigerian forces waged a merciless war to recapture Biafra’s oil resources. War and famine required approx. 1.5 million lives, before Biafra capitulated in 1970.

The oldest finds of people in the territory that today make up Nigeria date to the year 9000 BCE. During the first millennium possibly, agricultural communities gradually grew. City states grew in Hausa and Yoruba areas. In the north, they traded with Arabs, who introduced Islam to northern Nigeria around 1100-1500 AD Islam was long an elite religion, but in the early 1800s, the Socotocal Caliphate began to spread Islam to ordinary people in northern Nigeria.

Gold and slaves were central to trade with Europe and the Middle East from the second millennium, or Britain could ban slavery in 1807. However, slave trade continued between the north and south of the country. The British then increased their interests in Nigeria and secured palm oil and other raw materials for European industry. In the middle of the 19th century, the first missionaries began their ministry, and Christianity gradually spread in southern Nigeria. Lagos was annexed as a British colony in 1862, and the colonization of the country continued with final takeover of the most important cities in the north in 1903. Prohibition of slaves was then imposed in the area that now corresponds to Nigeria. The British ruled on the principle of indirect rule, where selective parts of traditional governance were retained locally, but were governed by British rule.

Overall forms of resistance to the colonial power accelerated from the early 1900s, where student and trade union organizations were central. In 1960 Nigeria became independent. Recent history is also characterized by violence and conflict, based on socio-economic issues, mixed with ethnic, regional and religious overtones. In 1966 it was the first Nigerian coup. The coup, which was led by iboer, was closely followed by a Hausa -dominert motkupp. The Ibo people declared the southeastern region, Biafra, as an independent state in 1967. The Biafra war that followed until 1970, when Biafra was again incorporated into Nigeria. Since liberation, Nigeria has had 28 years under various dictatorships. Since 1999, Nigeria has had continuous civilian rule based on elections.

Huge oil resources have characterized the country’s history since its first discovery in 1956. Combined with poorly developed institutions, oil resources have been used to support conflict lines between regions, and have been linked to corruption and human rights violations. The Niger Delta, where the oil resources are mainly located, has been characterized by violent conflicts, especially since 1990. Actors in local communities have legally and illegally fought for human rights, and against the oil companies for land rights and compensation for oil spills. During the Abacha regime, nine human rights activists were hanged in 1995, with Ken Saro-Wiwa as the best known of these. The violence in the Niger Delta went down following an amnesty agreement between militia groups and authorities under President Umaru Yar’Adua in 2009, but the area remains unstable. Following the 2015 election, new militia groups have been established and actions taken.

After 2011, conflicts in the North flared up, manifested especially through the Islamist terrorist group Boko Haram. Although Boko Haram is in retreat, there is widespread humanitarian crisis in the area. Boko Haram has exacerbated the general crisis in the Chad region. At the start of 2017, three million were on the run, half a million children were malnourished and 14 million children without access to school. 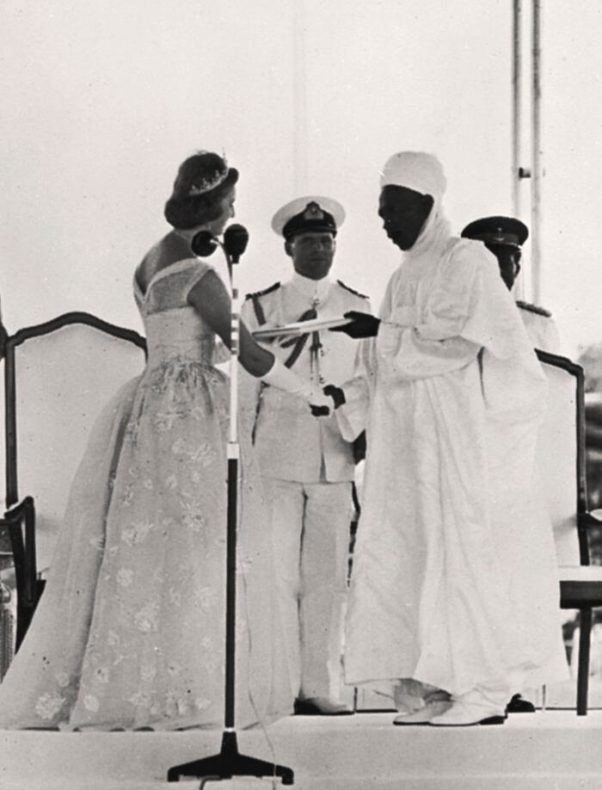 In 1960, Nigeria became an independent federal state within The Commonwealth. Princess Alexandra, representative of the British Crown, is handing over Prime Minister Abubakar Tafawa Balewa the agreement. 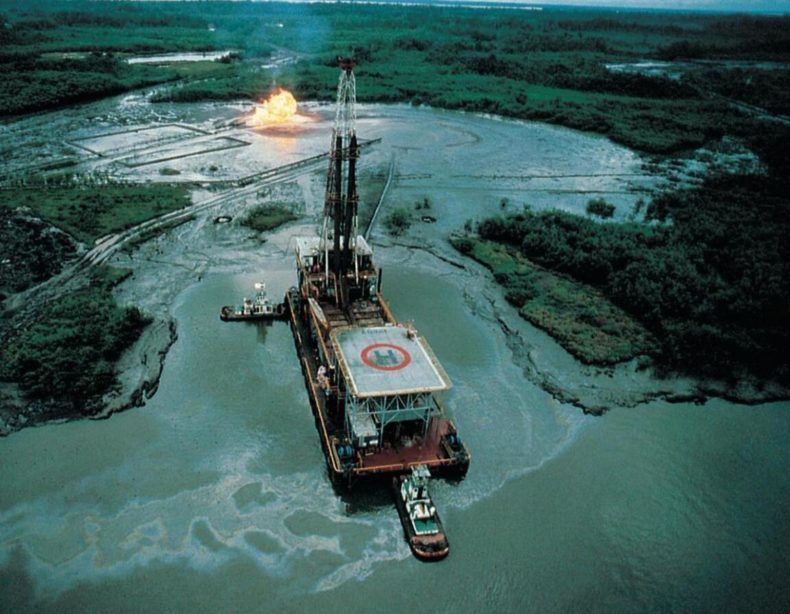 Nigeria has experienced rapid development as an oil exporting country, and oil revenues are of vital importance to the economy. The picture shows an oil drilling platform on the coast.

Nigeria is Africa’s largest economy. The country passed South Africa as the continent’s largest economy after the Gross Domestic Product (GDP) was adjusted according to new calculation methods in 2014. The country is the third largest military power and the largest oil producer in Africa (the tenth largest oil producer in the world). Nigeria is central to the economic community of the West African states, ECOWAS, and is steadily increasing the country’s other international economic importance. The country has seen an average economic growth of 7.5 per cent in the period 2003–2011. With the continent’s largest population, it is an interesting market for foreign stakeholders.

Nigeria has large mineral resources, such as coal, iron and tin, and the country is fertile with diversified agriculture. Exports of cotton, rubber and timber, and agricultural products such as palm oil, have historically been significant. Beginning industrialization in the early 1970s declined as a result of the 1986 oil crisis and structural adjustment program.

Oil has dominated the economy in recent decades and often led to the neglect of other parts of the economy. Oil revenues today contribute to 80 per cent of state revenues, but only to 15 per cent of the national value creation (GDP). The economy is vulnerable to variations in the international oil price, and the sharp fall in prices from 2014 is a major challenge for the country. From 2000, the authorities have been seeking gradual diversification in cooperation with the International Monetary Fund (IMF). The growth in the non-oil-related economy (in particular telecommunications, construction and agriculture) is greater today than the growth in the oil-powered economy.

Lack of infrastructure is a major challenge. Although Nigeria is an important country internationally, social unrest and conflicts limit investment willingness. Poverty and economic inequality are increasing. It is estimated that 70 per cent live below the poverty line and that unemployment is 25 percent. 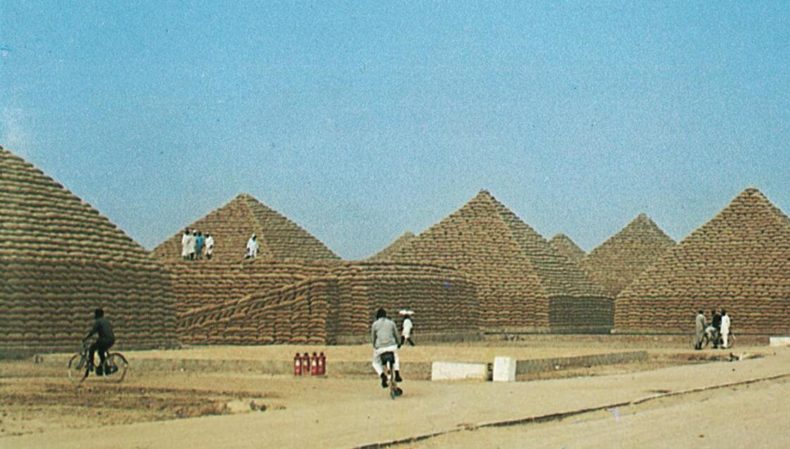 Peanuts are an important export item. The picture shows sacks of peanuts, stacked in pyramids, in northern Nigeria. 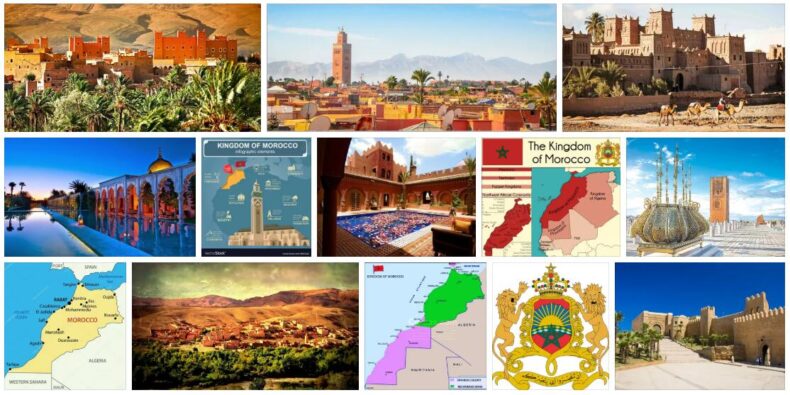