The country is best known for the lowland gorillas and chimpanzees (80% of the entire population are found in the Republic of the Congo), which live in the dense rainforests. In the unfortunately very hard to reach Odzala National Park in the northwest you can observe these primates alongside forest elephants – this park is one of the most wonderful places in the world.

Generally speaking, travel security in Congo has improved enormously since 2003.

The origin of the name of the Congo state has not been fully clarified. However, it is known that the first slave trade at the mouth of the Congo River must have taken place as early as the 17th century. The first French mission to the Congo was established in 1766. A military site later emerged here. The city of Brazzaville developed from this in the further course of history. The French occupiers, who turned the entire region into a French colony, had a great cultural influence in the country. The French language is still the official language in the Congo, and the dishes of France are still widespread.

Population: 4.24 million residents (July 2011, COUNTRYAAH.COM). With 97% of the population is almost exclusively of Bantu peoples together (48% Congo, 20% Sangha, 12% Mboshi, 17% Teke), continue to live va in the northeastern forest and marsh regions pygmies (1% of the population) as well as Europeans in the capital region.

Here is a detailed list of the largest cities in the Republic of the Congo.

Form of government: Congo gained independence from France on August 15, 1960, and Congo became a presidential republic on August 9, 2002. The constitution dates from 2002. The transitional parliament consists of 75 appointed members. The change from military rule to a democratic system has always been accompanied by unrest and civil wars. There was an armistice between the parties in 2003, and since then the security situation has improved.

Language: The official language in the country is French. Lingala (in the north) and Kituba (in the south) are important commercial and transport languages. In addition, many regional dialects such as Sanga, Téké, Ubangi and Kikongo (the most widely used regional dialect) are spoken.

Religion: about 50% of the population are Christian (about 40% Catholics, about 10% Protestants). There is also a small Muslim community that makes up about 2% of the population. About half of the Congolese believe in traditional African religions.

Local time: CET.
There is no daylight saving time change in the Republic of the Congo.
The time difference to Central Europe is 0 h in winter and -1 h in summer

Brazzaville, the capital, is located by the Malebo pool (sea-like extension of the Congo River). The capital of the Democratic Republic of the Congo, Kinshasa, is on the opposite bank.

Here you can find a detailed topographic map of the Republic of the Congo.

The narrow, sandy coastal plain is interspersed with lagoons and covered with mangrove vegetation and wet savannah.

Following this level, the country rises to a high plateau, the greatest heights are reached at the Gabon border at 1,040 m. More than half of the Republic of the Congo (57.2%) is covered with tropical rainforests.

Large swamp areas lie on the rivers Ubangi and Sanga in the northeastern part of the country. These rivers and the Congo drain these swamps.

Rivers are often the only inland connections, although the Congo is only usable for larger ships above the Malebo pool.

Population in the Republic of the Congo

This map of the population distribution in the Republic of the Congo was created by the Worldmapper team. Densely populated areas appear bloated, the area of ​​sparsely populated areas is reduced. The shape of the grid has been preserved; an underlying map with the original geographical extent helps interpret the map. The distorted map should help to present abstract statistical information clearly. 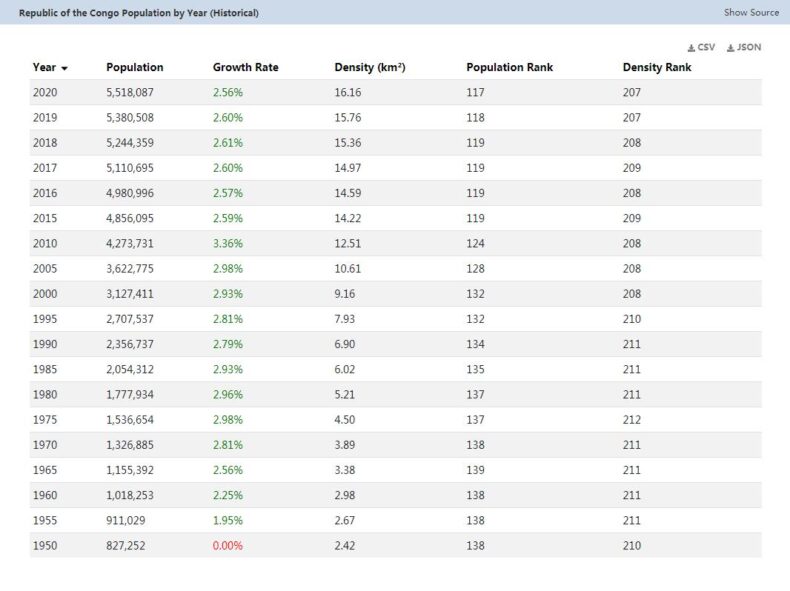