Population: 9.9 million people (July 2011, COUNTRYAAH.COM). Every Somali is a member of a tribe or clan (Qaabiil), the clan affiliation is inherited patrilinear. The most important clans in Somalia are: Hawiye (25%), Isaaq (22%), Darod (20%), Jareer Weyn (15%), Rahanweyn (or Digil-Mirifle) (20%, of which Digil 3%), You (7%). Minorities in the country are the Somali Bantu (their ancestors came to Somalia in the 19th century as slaves from Tanzania, Mozambique and Malawi), Swahili society and groups of mixed origin on the coast, several thousand Arabs and several hundred Indians and Pakistanis. These minorities make up about 15% of the population.

Greedly you will find a detailed list of cities in Somalia, ordered by population.

Form of government: Somalia was created on July 1, 1960 through the unification of British and Italian Somali country, at the same time independence was proclaimed. Somalia has been a republic since 1979. The constitution also dates from 1979, the last constitutional amendment was made in 1990, since 1991 (with the outbreak of the civil war) the constitution has been ineffective. A new constitution has been drawn up since 2000. A transitional parliament has existed in Somalia since 2000. Somaliland declared independence in 1991, but this is hardly recognized internationally.

Language: The main language in Somalia is Somali (spoken by approximately 12 million people in Somalia and neighboring regions). Commercial and educational languages ​​in the country are Arabic, English and Italian. Some of the Bantu peoples in Somalia speak their own Bantu languages.

Religion: Almost 100% of Somalia’s population belongs to the Sunni branch of Islam. About 80% of them are Shafiites, about 20% Hanafites. The only non-Muslims are several hundred Christians, almost all of them are foreigners.

Local time: CET + 2 h
Somalia has no daylight saving time changes.
The time difference to Central Europe is +2 h in winter and +1 h in summer.

Internet ID:.so (currently not in use)

Somalia is located in the far east of Africa, on the so-called Horn of Africa. Somalia borders the Indian Ocean to the east, the Gulf of Aden to the north, Djibouti to the northwest, Ethiopia (Ogaden or Somali region) to the west and Kenya to the south.

The country name Somalia is derived from the Somali people, who represent the majority of the population in Somalia.

The borders, particularly with Ethiopia, are controversial due to Somalia’s territorial claims. Northern Somalia is practically independent as Somali country, and Puntland has declared autonomous and Galmudug independent. Jubaland’s independence in southwestern Somalia has also been proclaimed several times.

Here you can find a detailed topographic map of Somalia.

Somalia has a largely flat coastline to the Indian Ocean, the total coastline is 2,720 km. The coral reef chain of the Bajuni Islands stretches from Kismaayo to Raas Kiyaambo.

The Somal Stream, a warm southern ocean current, runs off the coast of Somalia from December to March.

Most of Somalia is barren and dry with inland semi-desert plains, a subtropical southern region and a narrow coastal plain. The north is largely mountainous. Most of Somalia is formed from an almost waterless plateau.

The north of Somalia between Saylac and Berbera consists of a narrow coastal plain (Guban) on the Gulf of Aden, which is bordered by a steep mountain range, which is an extension of the Ahmar Mountains in Ethiopia. The mountains here reach heights of more than 2,000 m. Somalia’s highest peak is the Shimbiris (2,407 m). South of this mountain is a plateau with an average height of 900 m.

The port city of Hafun (or Ras Hafun) on a promontory in northeastern Somalia (see picture on the right) is considered the easternmost point of continental Africa.

The east and south of Somalia consist of a broad, low-lying coastal plain that gradually rises towards the west to the high plateaus of Ethiopia and northeast Kenya. To the south are the two main rivers, the Jubba and the Shebeli, both of which originate in the Ogaden region of Ethiopia. Agriculture is possible on their shores.

Shortly before the confluence with the Indian Ocean, these two rivers flow together. Only the Jubba has a significant amount of water all year round. The Shabelle evaporates mostly in the swamp area that extends parallel to the coast of the Indian Ocean. The rivers that arise in Somalia, like the Nogal, whose source is in the northern mountains, are of little importance. They only carry water in the rainy season.

This map of Somalia’s population distribution was created by the Worldmapper team. Densely populated areas appear bloated, the area of ​​sparsely populated areas is reduced. The shape of the grid has been preserved; an underlying map with the original geographical extent helps interpret the map. The distorted map should help to present abstract statistical information clearly. 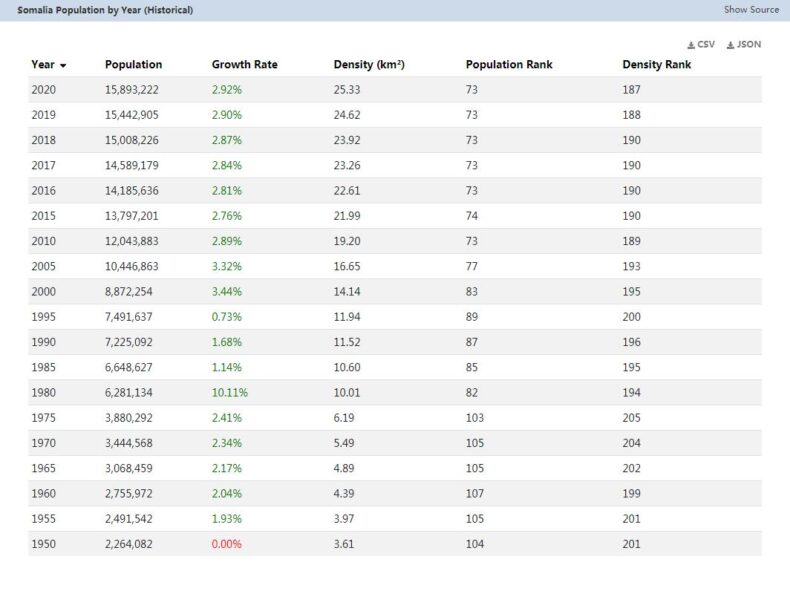