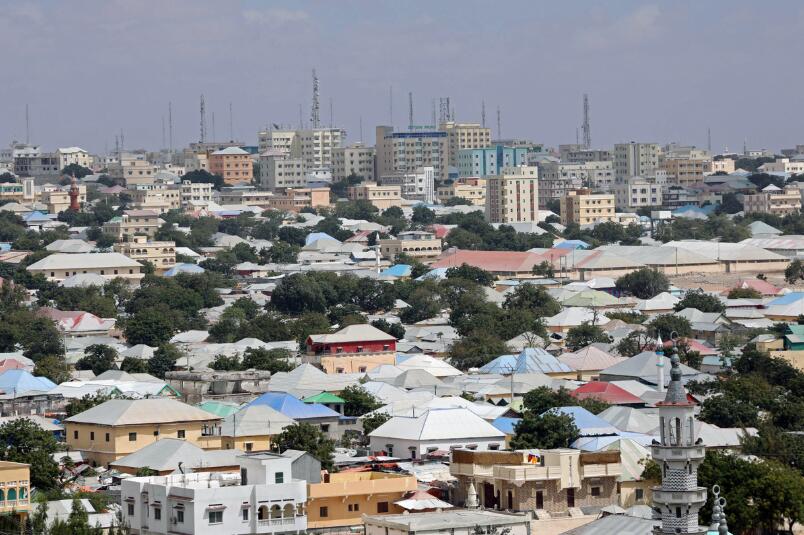 Somalia is a republic in East Africa, between the Gulf of Aden and the Indian Ocean, on the Horn of Africa. Somalia borders Djibouti in the northwest, Ethiopia in the west and Kenya in the southwest. The equator goes through the country farthest to the south.

Somalia is one of the poorest countries in the world and has been ravaged by conflict and war since the 1980s. These have contributed to several cases of severe drought and hunger, and to a large number of refugees, both out of Somalia and internally in the country. From the mid-2000s, the al-Shabaab terrorist group has posed a security threat. In 2012, Somalia was transformed into a federal state, with several states. Two regions, Somaliland and Puntland, have previously broken out of Somali state formation and declared independence.

Somalia became independent in 1960 when the former protectors of British Somaliland (in the north) and Italian Somaliland (in the south) merged. The Somali region (with a Somali chain and speaking population) includes today’s Djibouti, the eastern parts of Ethiopia and the northern parts of Kenya. During the Cold War, Somalia, with its important strategic location, was part of the superpower rivalry on the Horn of Africa. In the 2000s, Somalia has been a starting point for piracy in Adenbuka.

Somalia has Africa’s longest coast, and the majority of the urban population resides on the coast. Inland is dominated by nomadic way of life. The northern part of the country, with the exception of the areas adjacent to the Djibouti border , is characterized by highlands and a coastal plain that narrows to the east. These areas are drier than the rest of the country and have the most extreme temperature variations. The temperature can reach up to 45 ° C in May, June and July, while there can be frost inland in January and February. Somalia’s highest mountain, Shimber Berris (also called Surad Ad) stretches 2460 meters above sea level, and lies to the north.

To the south, from the southern part of Puntland, the coastal plains are spreading, and the highland plateau becomes lower and extends west from the coast. The climate along the coast is milder, and relatively dry. The riverbeds of Juba and Shabelle provide more fertile soil. The large agricultural areas are located here.

Somalia as a whole usually has two rainy seasons: Gu (April to June) and Dayr (October to December). Along the coast between Mogadishu and Kismaayo, there is a third rainy season (Xagaa) in July – August, with short rain showers. In these areas the flora is more varied than in the north, where acacia trees are a common tree species. Deforestation, especially in the north, has led to changes in the fauna, with less species diversity. In the far south of the country, wildlife is varied, even with larger species, although the prevalence has also been reduced as a result of poaching.

Somalia is populated by ethnic Somalis who make up about 85 percent of the population. In the north, there are many oromos; on the coast Arabs of Yemenite origin. The country is also populated by groups that are not considered Somali; including oars ( bantu ) and bajunis living in the border areas between Somalia and Kenya. The clans Benadiri and Brava are sometimes considered non-Somalis, other times as Somalis.

The exact population of Somalia is uncertain, both because war has made counting difficult and because part of the population is nomadic. Estimates of the population vary between 11 and 15 million (2018). Less than half live in cities. There are around one million Somali refugees scattered around the world, most in Kenya and Yemen; over two million people are internally displaced in Somalia (2018).

The population is mainly Muslim, and Sunnis belonging to the Shafia law school dominate. Also Sufism has a long tradition, and the Saudi Wahhabism is on the rise.

Somali was standardized as a written language in 1972 and is the main language. It belongs to the Kushite language family, and is well-known among other things for Afar, Saho and Oromo. Arabic is on the rise. On the south coast, Swahili is also used.

Much of the social structure is based on an intricate clan system. All Somalis belong to a clan, associated with the ancestors on the father’s side. There are a number of clans and sub-clans. One of several overviews of main clans is this: Darood, Hawiye, Dir, Isaq and Digil-Mirifle. Different clans dominate different parts of the country, and are partly also linked to traditional way of life. Over the years, the subclans have become more important.

In the north, Somaliland (from 1991) and Puntland (from 1998) became to some extent independent regions. As a result of the new constitution from 2012, a federal structure has been introduced with states that have internal autonomy. The states are: Galmudug, Hishabelle, Jubaland, Puntland, Somaliland, southwest Somalia. Each state is divided into administrative regions and then into districts.

Somalia became a republic in independence in 1960. A military junta seized power in 1969. Civil war and state dissolution characterized the country in the 1990s, when there was no real central government. Following a lengthy process of transitional governance in the 2010s, a new constitution was passed and federal rule of law was introduced from 2012. According to this, parliament is divided into two, in an upper and lower house. The President is elected by the National Assembly and appoints the Prime Minister, who must be approved by this. From 2012, the parliament is headed by Norwegian Somali Mohamed Osman Jawhari. In 2017, Mohamed Abdullahi Mohamed was inaugurated as new president and Norwegian-Somalian Hassan Ali Khaire was elected prime minister.

Military conflict is still ongoing, mainly because of the activity of the Islamist terrorist group Harakat al-Shabaab, which is active in parts of southern Somalia. In the early 2000s, military forces from Ethiopia and Kenya were deployed to support the transitional government in the fight against Islamists. From 2007, a peacekeeping force from the African Union, AMISOM, has taken over the role. AMISOM has fought with al-Shabaab a number of times. It is estimated that since 1991 between 300,000 and 500,000 people have died as a result of the war in Somalia. Several countries are participating in the construction of a new Somali defense, and the United Arab Emirates has established a base in Somaliland. The human rights situation is serious, with widespread occurrence including sexual abuse and child and forced marriage. Somalia has for years been ranked as the world’s most corrupt country. 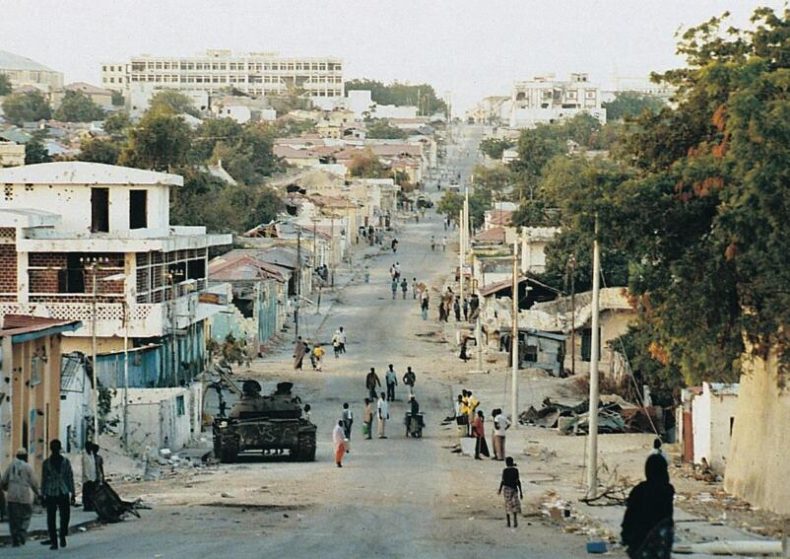 During the civil war in 1991, the capital Mogadishu was severely damaged. The city was modernized under Italian colonial rule and characterized by Italian architecture of the time. Mogadishu became known as “The White Pearl” by the Indian Ocean.

Somalia is a member of the UN and most of the UN’s special organizations, including the World Bank, by the African Union and the Cotonou Agreement (formerly the Lomé Convention).

Somalia is a long history of city states and state formation, and from the Middle Ages was an important trading center with trade both east to South Asia and north to the Arabian Peninsula, as well as south to Africa. Arabs and Persians helped establish trade strikes on the coast. With the introduction of Islam, a number of sultanates emerged. One of them, Adal, waged holy war against the Christian Amharas in Abyssinia, who fought back the attack with Portuguese help.

Somalia was sought after by the European powers. France took control of the later Djibouti in the far north; Britain established a protectorate in the north and Italy established a colony in the south. For a short time, Egypt also claimed the Red Sea coast. Anti-colonial resistance was turned down. During World War II, Italy had to give up Somaliland, but ruled the area on behalf of the UN after the war. In 1960, British Somaliland and Italian Somaliland were merged into the independent state of Somalia.

When President Abdirashid Ali Shermarke was killed by his bodyguard in 1969, army officers seized power in a coup. A military junta led by Siad Barre then ruled the country until he was forced to step down in 1991, and Somalia as a state disbanded. Siad Barre supported the Soviet Union for a long time – until the war against Ethiopia in 1977-1978 (the Ogaden war ). When the Soviet Union chose Ethiopia’s side in the war, Somalia instead established close relations with the United States.

The Ogaden war led to increased dissatisfaction with Siad Barre’s regime. Military resistance to the regime led to disintegration in 1991. The ensuing power struggle led to civil war where different militia groups took control of different areas, also in the capital Mogadishu. Following a drought and famine disaster in 1991-1992, the United States and the United Nations decided to launch a peace operation, Operation Restore Hope. The original US force was replaced in 1993 by a UN force, UNOSOM, in which Norway also participated.

As the northern parts of the country became more peaceful throughout the 1990s, new conflicts in the south came, largely as a result of the rise of radical Islamist groups, primarily Harakat al-Shabaab. Two national transitional governments were established (2000 and 2004) before a new government and a new parliament were set up in 2012.

Somalia is severely affected by many years of war as well as drought. There are regional differences, and with greater stability and advancement in the regions of the north (Puntland and Somaliland) that have also taken greater independent hold on the development. The economy depends on both international aid and money sent home from Somalis in the diaspora, as well as the export of live animals (goats, sheep and camels). Cattle account for about 80 percent of exports. While Somalia exports meat, the country relies on importing a lot of other food. A large part of this comes in the form of emergency aid. Somalia is heavily dependent on imports, and the trade deficit is to some extent covered by the transfer of money from Somalis abroad.

Economic development is hampered by the security situation, both in cities and in the countryside. Political contradictions create uncertainty about investment climate, and corruption is a persistent problem. Also, poorly developed infrastructure, including the physical, is a barrier to business operations and economic development.

Somalia has no centralized school system after the state disbanded, but has private services. Somalia has several universities, most of them private.

Compared to the rest of the region, Somalia and especially Somaliland have relatively well-functioning media, but freedom of expression is under pressure.