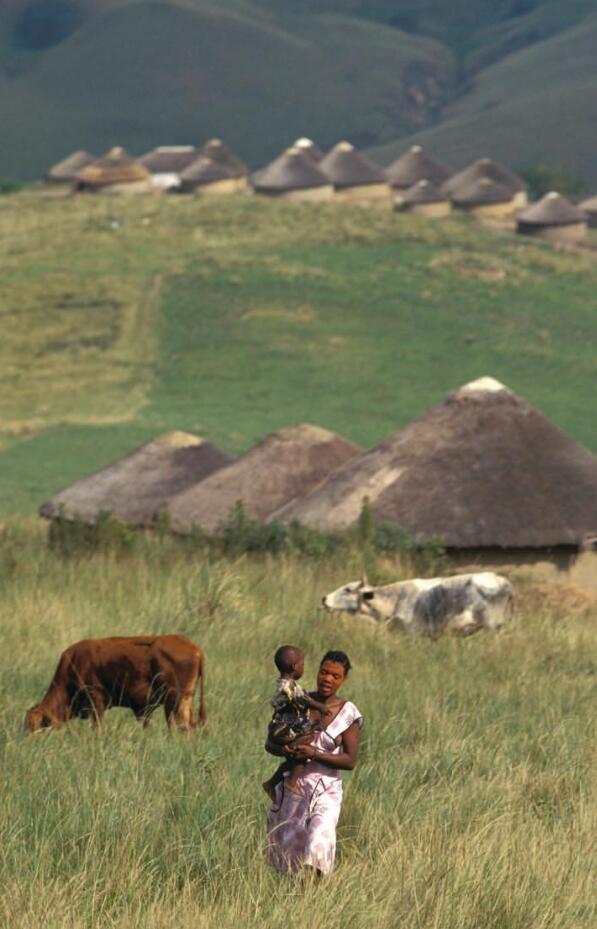 South Africa is a republic in Africa, farthest south of the African continent. The country faces the Indian Ocean to the east and the Atlantic to the west. In the north, South Africa borders Namibia, Botswana and Zimbabwe, in the east to Mozambique and Swaziland. Lesotho is surrounded by South Africa in the country’s eastern part.

From the founding of South Africa in 1910, the country pursued a strict racial separation policy. From 1948, the white minority regime tightened its racial divide and oppression under the name apartheid. Apartheid was officially abolished by a series of legislative changes in the early 1990s, culminating in South Africa’s first free democratic elections in 1994. The former African National Congress (ANC) liberation movement has won all elections since its release.

South Africa is today a major power on the African continent, but is struggling with major social differences between poor and rich.

South Africa has a land area of ​​just over 1.2 million square kilometers. The coastline from the border with Namibia on the Atlantic coast south around Africa’s southernmost point and northeast towards subtropical Mozambique by the Indian Ocean is over 3000 kilometers. The country has over 290 nature parks and is home to over 300 mammals, 800 bird species and over 8000 plant species. South Africa houses eight UNESCO World Heritage sites and can be divided into eight ecosystems – from desert to savannah and forest.

South Africa has a varied climate. In the southwest – in the Western Cape province – there is a Mediterranean climate with winter rainfall, in the northwest it is largely semi-desert, in the lowlands in the northeast and towards Mozambique there is a subtropical climate, and on high plains in the inland the climate is characterized by a lot of sun and pleasant temperatures, but also cold winter nights. On the high plains we find South Africa’s largest city, Johannesburg, at 1753 meters above sea level.

The country has a vulnerable ecology and has often lived through drought periods. In 2017–2018, the million town of Cape Town had to impose extensive water restrictions to prevent the drinking water sources from emptying. South Africa is the world’s 14 largest source of greenhouse gas emissions. This is particularly linked to the coal mining industry, the country’s most important source of energy, which accounts for close to 90 percent of the energy supply. South Africa is the world’s seventh largest producer of coal, but has committed to investing far more in renewable energy sources and to reduce coal use.

South Africa’s population of just under 58 million people (2018) is very complex. Population growth is 1.2 per cent, while life expectancy is 67.3 years for women and 61.1 for men. Nearly two-thirds of the population lives in urban areas and towns.

South Africa is still characterized by the era of apartheid, with great poverty and extreme inequalities between rich and poor. Although the government has introduced several welfare services, developed a comprehensive social security system and secured large groups of poor access to water, electricity and housing, the country is struggling with high unemployment, social unrest and a lot of crime. Redistribution between poor and rich goes very slowly. The biggest change in inequality has been within the black population, where more than half live in poverty and a small minority in a growing middle class have been getting better income and living conditions.

South Africa has 11 official languages. The two largest languages ​​in the black population (80.9 percent in 2018) are Zulu and Xhosa. The white population (just under eight percent) is made up mainly of a group of descendants of English immigrants and the African population of Dutch (as well as German and French) origin. There is also an Asian minority (2.5 percent) where the bulk is descendants of Indian contract workers during the colonial era. Dye (‘colored’), which constitutes 8.8 percent, is composed of descendants of mixed ancestry of slaves obtained from Indonesian colonies (especially Malaysia) and from other parts of Africa, as well as the first white immigrants and the local indigenous.

South Africa has a secular state, but religion plays an important role in society. The vast majority (over 80 per cent) belong to different directions within Christianity, who came to the country with European colonists and immigrants. Among the many non-Christian faiths, Islam is the largest with less than two percent of the population. 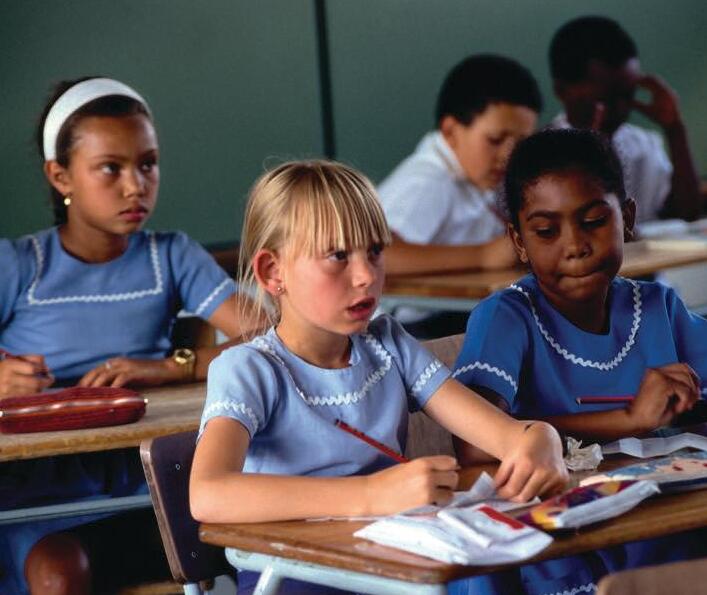 In South Africa, despite the repeal of racial segregation laws, there are still certain ethnic differences in living and living conditions. Integration measures are still being implemented. Here from an integrated primary school in Johannesburg.

Together with Egypt and Nigeria, South Africa has Africa’s largest economy. The country has a well-developed infrastructure, Africa’s leading banking and finance sector and is the only upper middle-income country in Africa, alongside Botswana, Gabon and Mauritius. 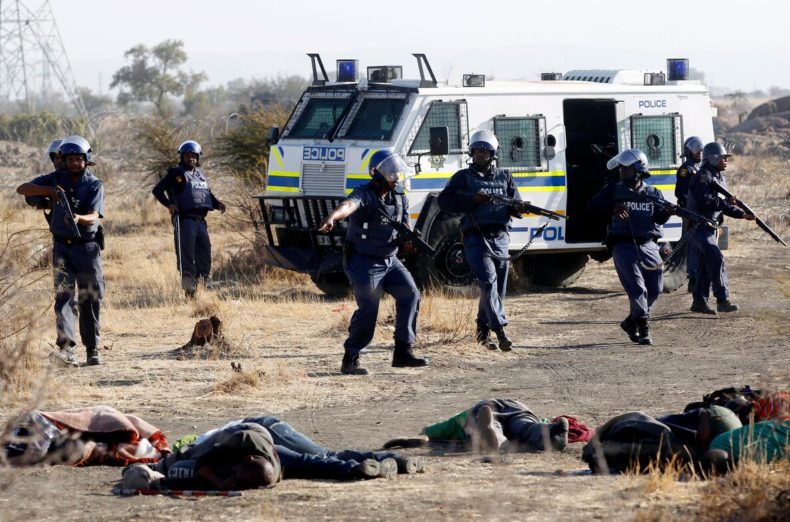 Mining is an important industry in South Africa, but the sector also has a high level of conflict. In August 2012, workers at the company Lonmin’s mines strike at Marikana in Rustenberg outside Johannesburg. During riots, police opened fire on the striking miners, killing 34 people in what has become known as the Marikana massacre.

The mining industry has been the historical foundation of South Africa’s modern economy. South Africa mines a large number of minerals and is a leading mining nation internationally. Today, this sector contributes to less than 10 per cent of gross domestic product, but it accounts for over half of the country’s export revenue. Commercial agriculture is also an important sector with maize being the largest product. Exports are mainly dominated by fruits and vegetables, as well as wine.

South Africa has a large industrial sector where automotive and food production are important areas together with the processing of some raw materials from the mines. The formerly important textile industry is in decline due to cheaper manufacturers in Asia. 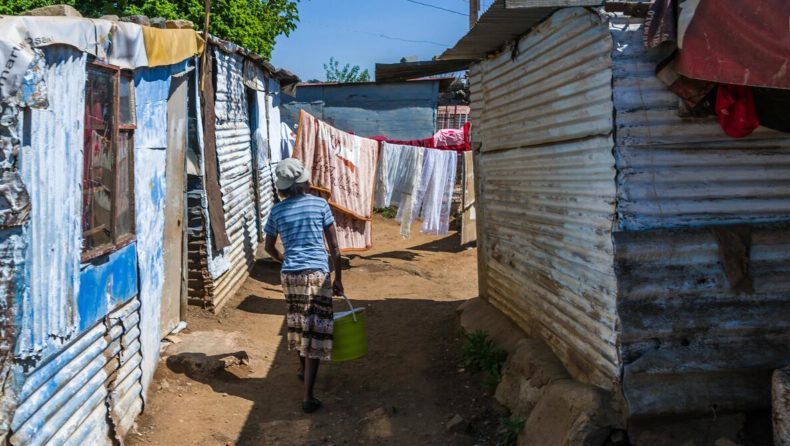 South Africa is a relatively rich country with a well-developed economy, but many still live in poverty and the differences between poor and rich are large.

In recent years, the strongest growth has been linked to the service sector, where banking and finance, telecommunications, retail trade and tourism have been key drivers. Construction has also been a sector of strong growth.

The informal sector is a small sector measured in terms of contribution to gross domestic product, but it employs a significant portion of the labor force – perhaps as much as a third of all non-agricultural labor. The majority are employed on informal contracts in small businesses and households.

South Africa also has a large number of state-owned companies that have been important engines of the economy. Together with the public sector, these have also been important instruments for promoting greater ownership of the black population, including through requirements for the use of black suppliers when purchasing.