Burundi in East Africa is one of the smallest countries in Africa and is currently not used by many tourists visited. The country, with its natural wealth, varied vegetation zones and cultural sights, is one of the attractive countries in the region.

The countrylies between Lake Victoria and the northern tip of Lake Tanganyika and is crossed by a high plateau that rises to almost 2,700 meters. The altitude noticeably softens Burundi’s tropical climate.

The high plateau, which belongs to the geological system of the Central African Rift Valley, drops steeply towards the west. The valley of the moat is filled by Lake Tanganyika (the sixth largest and second deepest lake in the world after Lake Baikal). According to the World Conservation Union IUCN, Lake Tanganyika is the most biodiverse place in the world. Among other things, more than 310 species of fish live here, of which 95% only occur here.

Burundi is also the southernmost source of the Nile. The river Luvironza rises 45 kilometers east of Lake Tanganyika between Bururi and Rutana and flows into the Nile over the Ruvuvu and Kagera rivers. The total length of the Nile is measured from this Burundian source. The search for the source of the Nile in the 19th century included the famous African explorers David Livingstone and Henry Morton Stanley in what is now Burundi. This is evidenced by the Livingstone Stanley Monument south of the capital Bujumbura.

There are three national parks in Burundi. The Rusizi National Park is probably the most popular protected area in the country. Here you can see hippos, antelopes and monkeys. Chimpanzee trekking is possible in the Kibira National Park, the Ruvubu National Park has a diverse bird life.

In addition to these natural attractions, the Holy Drummers and the former royal residence of Gitega attract visitors.

After Rwanda, Burundi is the most populous country in Africa (apart from the island states of Mauritius and the Comoros). The country borders Rwanda, Tanzania and the Democratic Republic of the Congo.

The term Tutsi is a commonly used but inappropriate term. In the self-designation of the Tutsi, BaTutsi is the name for a single Tutsi, while the people are referred to as WaTutsi. From the colonial era, this became the term Watussi, which is no longer used today.
It is an artificial distinction since there are no major cultural or linguistic differences between these three ethnic groups. The three groups indicate status rather than belonging to an ethnic group.

Population density: 367 people per square kilometer, one of the most densely populated countries in Africa.

Here is a list of the major cities in Burundi.

Form of government: Burundi has been a presidential republic since 1966. The constitution dates from 1992. A military coup occurred in 1996; a transitional constitution has been in force since 1998. The parliament (Assemblée Nationale) consists of 140 deputies; Elections take place every 5 years. Since the military coup in 1996, there has been a transitional parliament made up of members of parliament and representatives of all political and social groups in the country. Burundi has been independent of Belgium since July 1, 1962.

Head of state and head of government: Pierre Nkurunziza, since August 26, 2005.

Language: The official languages ​​in Burundi are French and Kinyarwanda. Kiswahili (especially in the Lake Tanganyika region and around Bujumbura) and English are common.

Local time: CET + 1 h. In Burundi there is no change between summer and winter time.
The time difference to Central Europe is + 1 h in winter and 0 h in summer.

Burundi is one of the smallest countries in Africa (slightly smaller than the state of Brandenburg) and – like the neighboring country of Rwanda – very densely populated. The country is between 2 ° and 4 ° south latitude and 29 ° and 31 ° east longitude.

Burundi borders the Democratic Republic of the Congo in the west, Rwanda in the north and Tanzania in the east.

The defining landscape of Burundi is a low-tree savannah highland with a temperate climate due to the high altitude.

Located between Lake Victoria and the northern tip of Lake Tanganyika, the country is traversed by a high plateau (1,400 – 1,800 meters) that gradually rises to the west up to 2,670 meters. This outcrop forms the watershed between the Congo and the Nile and finally falls steeply into the interior of the ditch valley filled by Lake Tanganyika.

The high plateau is severely cut and bracketed and broken down into individual ridges and hilly countries. It essentially consists of the old crystalline African mass, a hull surface on which horizontally running layers of rock made of slate, quartzite and sandstone are stored.

In several seasons, the often gently undulating plateaus in northeastern Burundi break off towards the Victoriasess valley.

The present-day landscape of Burundi has its origins in the young tertiary when the great East African trench system was created. This belongs to an unrest zone in the earth’s crust, which stretches from the Tanganyika trench across Ethiopia and the Red Sea to the Jordan trench. As a result of the larger elevation, the old crystalline rocks of the Precambrian mass are exposed at the edge of the trench, while the younger layers in the eastern parts of the plateau are still preserved.

The landscape in Burundi is hilly and covered with eucalyptus trees, banana plantations, arable and pasture land. In the east, this fertile landscape merges into savannah. The tree population here has been partially destroyed by human influence.

The edge zone of Lake Tanganyika is dry savanna due to the low rainfall. The plateau also becomes drier to the east.

The rainforest, which was probably more widespread in Burundi in the past, is now restricted to the high mountain ranges exposed to the wind.

Red-brown soils and red soils predominate on soil types. The alluvial plains on the northern edge of Lake Tanganyika are fertile.

Here you can find a detailed topographic map of Burundi.

This map of Burundi population distribution was created by the Worldmapper team. Densely populated areas appear bloated, the area of ​​sparsely populated areas is reduced. The shape of the grid has been preserved; an underlying map with the original geographical extent helps interpret the map. The distorted map should help to present abstract statistical information clearly. 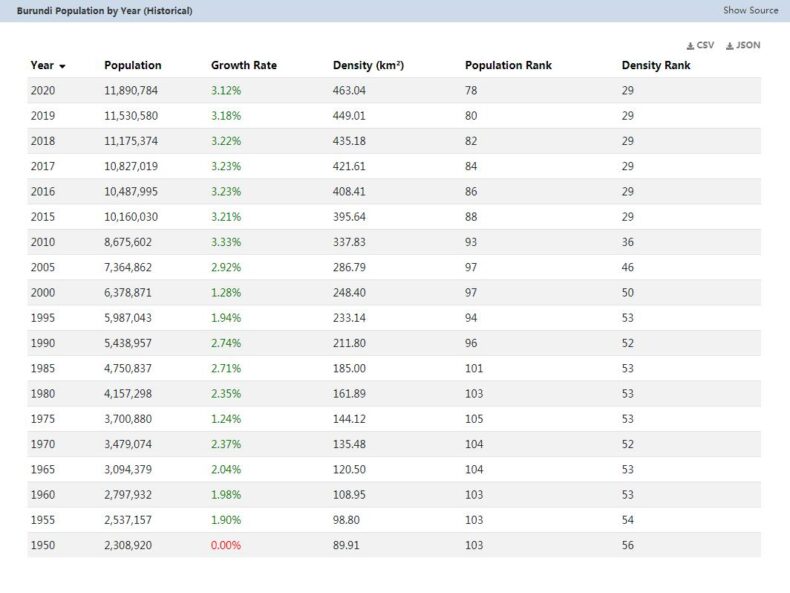