Uganda is rich in fertile soil compared to other East African countries and was described by Winston Churchill as “Pearl of Africa”. After the rule of dictatorships and civil war from 1966 to 1986, Uganda is again popular with tourists due to the numerous attractions.

In Uganda there are the famous Murchison waterfalls, the water of the Nile plunges 40 m into a 10 m wide gorge. The high humidity in Uganda also creates swamps, wet savannas and tropical rainforests. There are unusual ecosystems and the most diverse animal populations in Africa – you can discover numerous unique national parks on trips and safaris in Uganda. Especially the opportunity to see chimpanzees and gorillas up close attracts many travelers to Uganda.

Although Uganda is very rich in cultural treasures, it is rarely visited. One of the reasons is that travel warnings still apply to northern Uganda. A visit to this region is not recommended, here a civil war-like conflict flares up again and again.

Despite the internal turmoil, Uganda is surprisingly well positioned in the education system. There are several universities and colleges in Uganda. Uganda also has a relatively high level of media freedom. Newspapers, radio stations and TV stations report critically about governments and political decisions. However, when sensitive issues such as child soldiers and civil war are taken up, they often garner a violent government response.
Uganda has a widespread awareness of the country’s environment and natural beauties. The national parks and game reserves are a result of this appreciation. Parks and protected areas are set up across the country, forming an extensive protection system throughout Uganda.

Form of government: Uganda has been a presidential republic since 1967 and is represented in the Commonwealth. The current constitution dates from 1995, the last constitutional change was made in 2005. The Ugandan Parliament consists of 332 MPs, of whom 215 are directly elected, 104 are nominated by different interest groups (women 79, army 10, disabled 5, youth 5, workers 5) and 13 are ex-offico members. Uganda has been part of Great Britain since October 9, 1962independently.

Language: the official languages ​​in Uganda are English, Kisuaheli and Luganda. Numerous Bantu languages ​​such as Buganda, Banyoro, West and East Nilotic languages ​​are also spoken. English is taught in schools, used in courts, in most newspapers and in some radio stations, Luganda (also called Ganda) is the most widely used Niger-Congo language. The country also speaks other Niger-Congo languages, Nilosaharan languages, Kiswahili and Arabic.

Local time: CET + 2 h
In Uganda there is no change between summer and winter time.
The time difference to Central Europe is +2 h in winter and +1 h in summer.

The inland East African country on both sides of the equator is one of the most densely populated countries in Black Africa. Uganda stretches between 1 ° south and 4 ° north latitude and between 29 ° and 35 ° east longitude. The country’s name goes back to the Kingdom of Buganda, the most important of the kingdoms that arose on today’s territory.

Uganda borders Sudan in the north, Kenya in the east, Lake Victoria in the southeast, Tanzania and Rwanda in the south and the Democratic Republic of the Congo in the west.

Here you can find a detailed topographic map of Uganda.

Uganda is part of the East Africa zone, which has been shaped by recent geological events. The old African mass, consisting mainly of rocks from the early days of the earth, was partly raised and partly sunk in the Tertiary and Quaternary, whereby volcanic rock masses have made their way to the surface in the fracture zones. The most striking feature of these young crustal movements is the Central African rift, on the eastern flank of which Uganda has a share and on the bottom of which lies Lake Eduard (also Rutanzige Lake and Albert Lake). The edge of the trench sometimes drops very steeply by 800 m.

Most of Uganda is covered by gently undulating plateaus with extensive flat basin landscapes such as the Kyoga basin, in which the Victoria Nile forms Lake Kyoga, a flat, often swamped water surface.

Uganda is characterized by lakes and the White Nile (here: Victoria Nile and Albert Nile), rainforests and savannas. The country is traversed by the equator in the south. Uganda’s lowest point is the lower reaches of the Albert Nile at around 610 m above sea level (Lake Albert 621 m above sea level). The Margherita Peak (also: Mount Stanley) in the Ruwenzori Mountains as the highest point is 5,110 m high. Both extreme points are relatively close together. The total area of ​​the country is 241,038 square kilometers, of which 199,710 square kilometers are land, while 36,330 square kilometers are water areas. The north-east of Uganda is semi-arid.

Tropical forests, the terraced hills of Kigezi and the tea plantations on the slopes of the snow-covered Ruwenzori Mountains shape the landscape. The barren Karamoja plain lies on the Sudanese border, the fertile Buganda region has the highest population density.

Particularly impressive are the Murchinson Falls, in which the White Nile falls from the outskirts to the ditch. In the east of the country are the Mount Elgon volcano on the border with Kenya and some other volcanoes. In the south, on the edge of the ditch, the highlands of Rwanda and Burundi reach Uganda at a height of 2,000 to 2,500 m.

Large papyrus swamps, for example on Lake Kyoga, are characteristic of the flora of the extensive hollows in the highlands. The plant formations are also peculiar in the higher elevations in the west, where cloud forests with huge moss carpets, in which you can sink down to your hips, spread out. Mighty white-bearded lobelias and tree arenas still grow at great heights, almost to the region of eternal snow and the glaciers. Tree ferns, giant beard lichen, bamboo and Ericaceae forests can be found below. The sugary bamboo saplings are the favorite food of mountain gorillas.

Among the soils in Uganda, the volcanic and red clay soils are particularly fertile, but in some cases they are exhausted by continuous cultivation. The soils in the south-west of the country, which have formed on slate, are also well suited for agricultural cultivation, as are the black swamp soils, insofar as they are drained.

The very rich wildlife of East Africa is also represented in Uganda, the bird life is very rich. Here you can find species such as the shoe beak, the saddle stork and the golith heron.

This map of the population distribution in Uganda was created by the Worldmapper team. Densely populated areas appear bloated, the area of ​​sparsely populated areas is reduced. The shape of the grid has been preserved; an underlying map with the original geographical extent helps interpret the map. The distorted map should help to present abstract statistical information clearly. 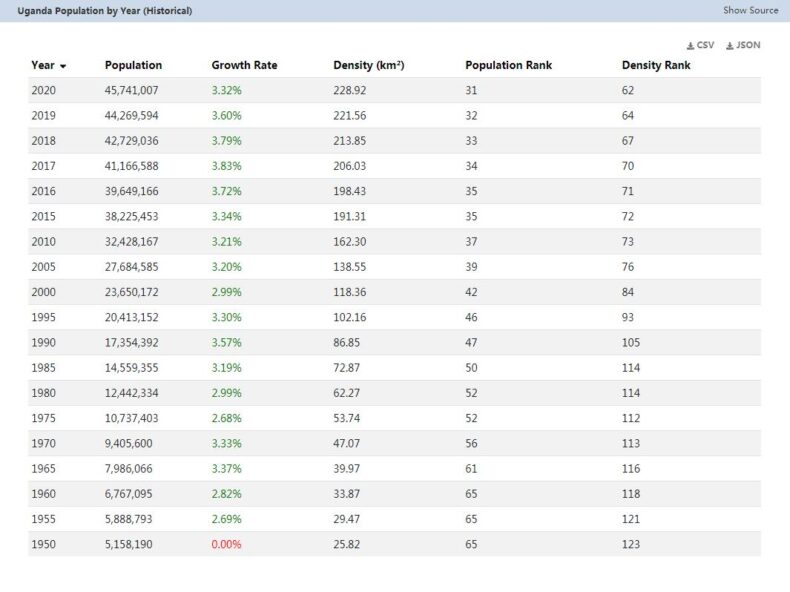