The small area of Benin has some superlatives: its residents controlled the largest slave trade in West Africa at the end of the 17th century and in the 20th century Benin was one of the countries with the most frequent coups. In addition, Benin was the only Marxist state on mainland West Africa until 1990.

The country name refers to the historical empire of Benin in West Africa, but there is no geographical or historical reference. However, the name Benin stands for a glorious African empire and is also a decision against local names, the traditions of which are cultivated only by some peoples in Benin.

Benin is a very suitable destination for visitors: the beautiful palm beaches in the south and the nature parks in the north are definitely worth a trip. Particularly fascinating are the numerous peoples in the country, their living cultures and traditions (including Voodoo). The old Fon capital Abomey, the magnificent works of art made of silver, bronze, tin and wood as well as the royal tapestries are first-class sights.

Benin is also particularly progressive when it comes to women’s and human rights. For example, girls and women have not been circumcised since 2005 and are no longer officially allowed to participate in circumcisions. This was preceded by a d eutsche initiative that concerns for years against this cruel ritual. This makes Benin the first African republic to take this step.

The first law against female genital mutilation was introduced in 2003. This has been a tradition in large parts of Africa for hundreds of years, but here, too, one can slowly recognize the terrible violence behind it. At the 2005 celebration, at which the German initiators were present, former circumcisers demonstrated their terrible tools. The unsterile blades and blades cost the lives of numerous girls and made women seriously ill. Not to mention the pain many have suffered for a lifetime.

Here is a current list of the largest cities in Benin.

Form of government: Benin has been a presidential republic since 1991, the constitution dates from 1990. The parliament (Assemblée Nationale) consists of 83 members, an election takes place every 4 years. The head of state is directly elected every 5 years, a one-time re-election is possible. Benin has been independent of France since August 1, 1960. In 1991, Benin went from a one-party system to parliamentary democracy.

Head of state and head of government: Dr. Thomas Boni Yayi has been President, Head of State and Government of Benin since April 6, 2006. On March 13, 2011, Yayi was re-elected with 53% of the vote.

Language: The official language is French. The approximately 60 different ethnic groups almost all speak their own native language. Fon and Yoruba are spoken predominantly in the south, while Bariba and Fulani are the most important among the six largest tribal languages ​​in the north.

Local time: CET. There is no changeover between summer and winter time in Benin.
The time difference to Central Europe is 0 h in winter and -1 h in summer.

Benin borders Nigeria to the east, Niger and Burkina Faso to the north, Togo to the west and the Bay of Benin to the south. The country is located in the area of ​​the inner tropics. The country’s name is said to commemorate the medieval Benin kingdom, a city-state founded in the 12th century.

Here you can find a detailed topographic map of Benin.

Benin stretches over 700 km from the Bay of Benin to Niger. At the narrowest point, Benin is only 100 km wide.

The country lies in the area of ​​the geological Guinea threshold, which runs parallel to the coast. Rocks from the early days of the earth come to light in the north of Benin. Towards the south there is a strip of younger rocks that form two striking strata cut by the Ouémé and its tributaries.

The coast consists mainly of a flat, sandy strip that is overgrown with coconut trees and borders on a lagoon area of ​​Porto Novo, Ouidah and Grand Popo. The numerous beach lakes as well as the swamps are separated from the Atlantic Ocean by a narrow sandbank belt that extends to the east of Benin to a width of 12 km. Only at Cotonou and Grand Popo do the tidal creeks (natural watercourses) have a direct connection to the open sea.

The lagoon area ends inland on a fertile, slowly rising plain with clay soil, which is called “terre de barre”. Their width ranges from 75 km in the west to 110 km in the east. This region, which is very important for agriculture, is intersected by a swampy valley in an east-west direction.

North of it are plateaus with isolated elevations that rarely reach a height of more than 500 m.

In the northwest of Benin rises the mountainous region of Atacora, which reaches 658 m at its highest point. A steep, 300 m high wall forms the border between the northern mountain ranges and the lowlands of the Pendjari.

In the northeast, the plateaus gradually merge into the Niger Valley, which has the Mekrou and the Alibori as its main tributaries.

In the south, the Ouémé runs into the Cotonou lagoon. The river Mono flows into the sea at Grand Popo and forms the border with Togo.

With the exception of the sandy coastal zone, to which a strip with heavy, black earth-like soils borders in the north, red-brown and red soils, some of which are more solidified by iron minerals, are common in Benin.

Moist savannah covers most of Benin, to the north it becomes dry savannah. The forests that originally existed as islands within the savannah or along the rivers are mostly cleared.

This map of Benin population distribution was created by the Worldmapper team. Densely populated areas appear bloated, the area of ​​sparsely populated areas is reduced. The shape of the grid has been preserved; an underlying map with the original geographical extent helps interpret the map. The distorted map should help to present abstract statistical information clearly. 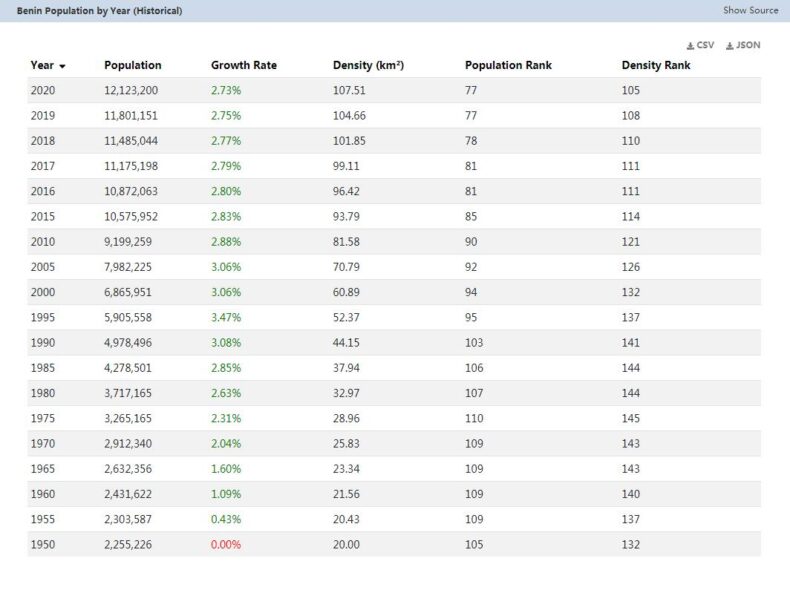