Mali got its name from the fact that the medieval empire of Mali was located in what is now Mali. By the way, Mali means “hippo”. The area of ​​today’s Mali was an important commercial and cultural center from the 5th to the 16th century, especially the regions around the inner Niger Delta and around Kidal in the east were cultural focal points. The empires of Ghana, Mali and the Songhai empire based their wealth on trade, the legendary cities of Timbuktu, Djenné and Gao developed into centers of education and cultural prosperity. In 1893, it conquered Timbuktu, the famous cultural and commercial center on the edge of the Sahara, under the name French Sudan to the colony of France. Mali gained its independence in 1960.

To travel to Mali are unique due to the different cultures and peoples along the Niger.

The People Bambara mostly speak in the region. The ancestors and ancestors of today’s population bequeathed a large collection of songs and stories to their descendants. These were never put on paper, but always passed on from mouth to mouth and recited by griots (storytellers). So these stories still live on in this culture today.

The world’s largest clay building was erected in Mali. It is the great mosque of Djenne, which is one of the most famous buildings in Africa and attracts numerous visitors and tourists. The mosque is located near the famous old town of Djenne, which together with the building of the mosque was declared a UNESCO World Heritage Site in 1998. If you want to visit the imposing building, you have to be Muslim. Non-Muslims are not allowed to enter the mosque.

Also Sport plays an important role in the lives of the people of Mali. In 2008, a total of 17 Mali athletes took part in the Beijing Olympic Games. But the most important sport in Mali is soccer.

Population: 14.2 million people (July 2011, COUNTRYAAH.COM). About 30 different native peoples who all speak their own languages. The largest and politically the most influential ethnic group are the Bambara (30% of the population). Malinké and Soninke (together 20%) Fulani (17%), Volta peoples (12%), Songhai (6%), Tuareg and Mauren (together 10%) and other peoples (5%) also live in Mali.

Here is a detailed list of the major cities in Mali.

Form of government: since 1960 Mali was a semi-presidential republic. The constitution came from 1992, the last constitutional amendment was made in 1997. The Malian Parliament (National Assembly) was made up of 160 members. The first free elections to the National Assembly were held in 1992. A military coup occurred in Mali on March 21, 2012, and a military government has ruled since then. Mali has been independent of France since September 22, 1960.

Language: The official language in Mali is French. The colloquial languages ​​are Arabic, Bambara (which is spoken by 80% of the population), Songhai-Jerma, Manding, Soninké and Ful.

Local time: CET – 1 h.
In Mali there is no change between summer and winter time.
The time difference to Central Europe is -1 h in winter and -2 h in summer.

Inland Mali is the second largest country in West Africa (after Niger). Straight lines border the north, which extends into the sahara. The actual habitat is the south of the country, where the Niger and Senegal rivers flow. The country name was taken from one of the great medieval empires in West Africa.

Here you can find a detailed topographic map of Mali.

Mali is a largely flat plateau country that is curved at the edges. The underground consists of crystalline rocks from the African base, which are overlaid with sand stones from the geology. the crystalline bedrock emerges to the south and east (Adrar of Iforas, 890 m).

Mali is two thirds desert. The country has a share in the Sahara, Sahel region and the large landscape Sudan. A spur of the Algerian Ahaggar massif dominates the northern half of the country. The north of the country consists of the Sahara, along the old Trans-Saharan caravan routes there are some oases.

In the far west Mali flows through the Senegal River, in the southern and central part of the Niger River in broad lowlands. The Niger Basin begins below Bamako, as a result of a landslide in the Tertiary that has since been replenished by the Niger and Bani rivers. Due to the small gradient, the Niger forms a large inland delta between Ségou and Timbuktu. This inland delta with its lush green pastures (in the rainy season) and irrigation systems on the southwestern edge is the main habitat in Mali.

The majority of the population lives in the savannah in the south.

The climate zones range from the tropical, humid Sudan climate to the desert climate of the Sahara. Accordingly, annual precipitation decreases from over 1,000 mm in the south to less than 100 mm in the north. Sometimes there is no rain for years. The vegetation in the south consists of moist savannah (with gallery forests along the rivers), which merges to the north in thorn bush savannah. Finally, semi-deserts and the Saharan desert belt follow.

The soils are fertile only in the south, otherwise they are low in humus and at risk of erosion. Alluvial soils found on Niger are only of limited suitability for agriculture: they are too wet in summer and too dry and hard in winter.

This map of the population distribution in Mali was created by the Worldmapper team. Densely populated areas appear bloated, the area of ​​sparsely populated areas is reduced. The shape of the grid has been preserved; an underlying map with the original geographical extent helps interpret the map. The distorted map should help to present abstract statistical information clearly. 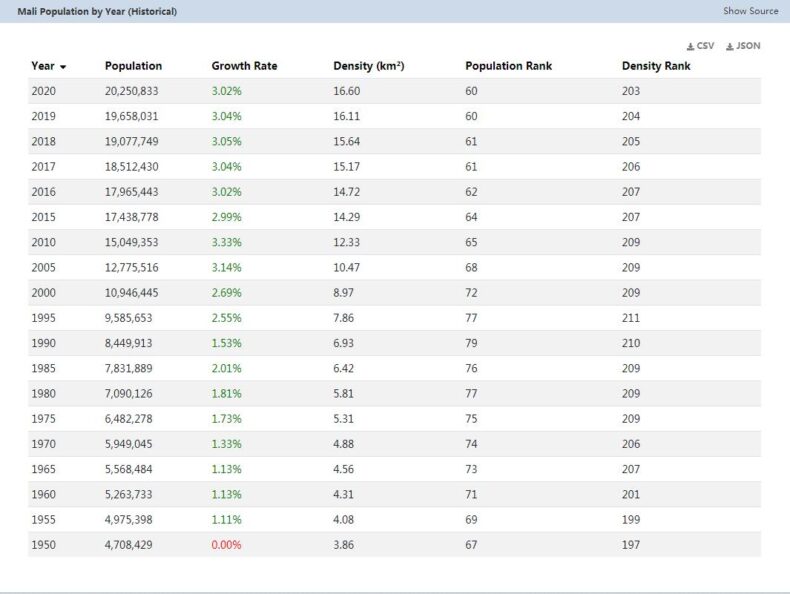