Mauritius is a relatively small island in the Indian Ocean, but the country is one of the most attractive holiday destinations worldwide. Summer temperatures, fantastic white, long beaches, a fascinating underwater world and spectacular mountains attract visitors to the island.

Mauritius is known for its unusual flora and fauna, nature lovers come especially in the Black River Gorges National Park at your expense.

But what distinguishes Mauritius from other bathing islands is the warmth of the population and the great cultural diversity. Immigrants from all over the world developed a tolerant Creole culture in Mauritius, in which the influences of Africa, Asia and Europe meet and coexist peacefully. This makes a vacation in Mauritius particularly varied.

Tourism in Mauritius benefits from the aforementioned scenic and cultural conditions. Due to the stable political situation, numerous investors have come to Mauritius since the country became independent in order to invest their money in a tourist infrastructure (e.g. hotels and guest houses).

As a result of this development, numerous holidaymakers travel to Mauritius, which benefits the country’s population. The per capita income in Mauritius is higher than in any other African country. Most of the holidaymakers come from France, Reunion and Great Britain, Italy, South Africa and Germany.

Some catastrophic cyclones (especially Cyclone Hollanda in 1994 and Dina in 2002) caused a brief drop in visitor numbers. But the tour operators were not deterred and continue to invest in facilities that will soon attract more tourists to Mauritius. Overall, however, one has to see that the tourist capacities are slowly exhausted after years of growth in Mauritius.

Here is a detailed list of the major cities in Mauritius.

Local time: CET + 3 h.
There is no changeover between summer and winter time in Mauritius.
The time difference to Central Europe is +3 h in winter and +2 h in summer

The Republic of Mauritius is an island nation in the southwest of the Indian Ocean, about 800 km east of Madagascar and about 2,000 km off the southeastern coast of Africa. The Seychelles are in the north and the French overseas department of La Réunion is in the west. The state consists of the main island of Mauritius and the smaller islands of Rodrigues (northeast) and Agalega (north), as well as the Cargados-Carajos Islands. Together they cover an area of 2,040 square kilometers, the coastline has a length of 177 kilometers. The name refers to the Dutch prince Maurits (Moritz) of Nassua (1567 – 1625).
The capital, Port Louisis located in the northwest of the main island of Mauritius. Other important cities in Mauritius are Rose-Hill, Beau-Bassin, Curepipe, Vacoas, Phoenix and Quatre Bornes.

Mauritius is of volcanic origin. Three bizarrely shaped mountains rise up to a height of 828 meters (Piton de la Petite Rivière Noire in the Black River mountain range in the southwest of the island) over the 300 to 600 meter high plateaus in the interior of the main island. The coast is steep and rocky and has numerous narrow bays.

Large parts of the main island are surrounded by a coral reef, from which some other small islands such as Amber Island rise, in the immediate vicinity of Mauritius are also Gunners’ Coin (Coin de Mire) (8 km off the north coast) and Round Island 22 km northeast.

The second largest island in the state of Mauritius is called Rodrigues and is populated by around 40,000 residents (about 3% of the total population in Mauritius). It is about 600 km east on approximately the same latitude.

Together with Reunion Island, the islands of Mauritius and Rodrigues belong to the Mascarene archipelago. This archipelago was created about 8 to 10 million years ago when the African plate drifted across the Reunion hotspots. However, the volcanoes are no longer active. 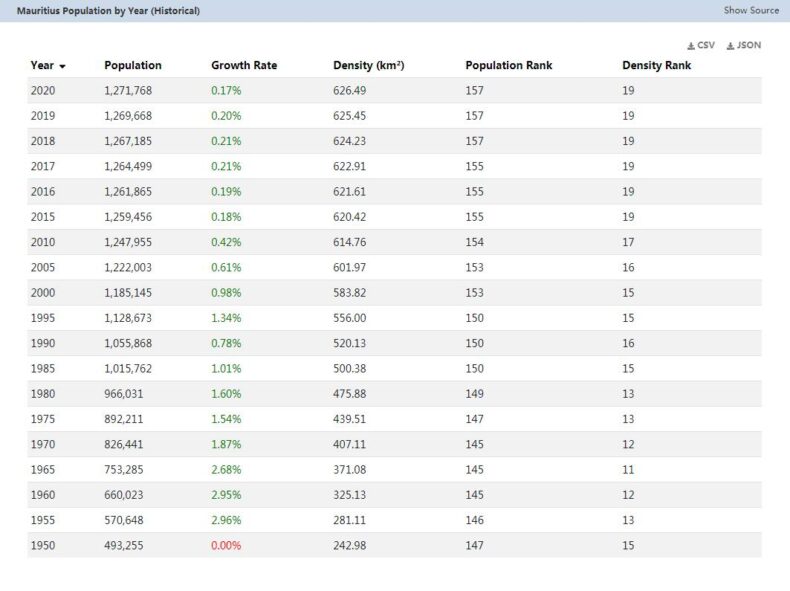 Passport: is generally required for travel to Mauritius, the passport must be valid for at least 6 months beyond the planned travel period.

Visa: Generally required, except citizens of the following countries who receive an “Entry Permit” for a tourist or business stay of up to 90 days on arrival:
Federal Republic of Germany, Austria, other EU countries and Switzerland;
Almost all Commonwealth countries (exceptions: visas are required for citizens of Bangladesh, Fiji, India, Cameroon, Nigeria, Pakistan and Sri Lanka).

Documents upon entry: Upon arrival, all travelers must be in possession of a valid passport, valid return or onward travel tickets, a hotel booking or an invitation letter, possibly a residence permit for Germany, Austria or Switzerland as well as proof of sufficient financial means for the duration of the stay.

The Passport and Immigration Office in Port Louis is responsible for extending tourist and business visas.

Transit: Transit travelers requiring a visa who travel within 24 hours, do not leave the transit room and are in possession of valid documents for the onward journey will receive a transit visa upon entry.

Application: Consulate or consular section of the embassy that forwards visa applications to the authorities in Mauritius.

Here you can download the visa application form for Mauritius.

Vaccinations: Information on international vaccination certificates required for entry can be found in the Mauritius – Health chapter.

The same visa requirements apply to the children as to their parents.

Entry with pets:
For pets, an import permit from the Ministry of Agriculture, Natural Resources and Environment and a health certificate from the country of origin are required. The quarantine requirement for dogs and cats is 6 months and for birds 3 weeks.
Note: Invertebrates as well as dogs and cats that come from places where rabies cases have occurred within a radius of 100 km must not be brought to Mauritius.