Namibia only achieved independence in 1990 and can look back on a history of oppression. Before the First World War, Namibia was colonized by the Germans and was part of South Africa for over 70 years.

Namibia is a multi-ethnic state, some of the African Cultures Namibia is one of the oldest in the world.

The Owambo majority culture has the greatest impact on life in Namibia. In the cities, however, there are still strong traces of the German colonial period in Namibia, which can be seen in many areas: various festivals (Carnival is celebrated in Windhoek), food (German restaurants are offered in some restaurants), Wilhelmine architecture in the German colonial style Cities like Windhoek and Swakopmund. Around 30,000 of the 2 million Namibians also speak German in addition to the official language English. In German-run shops and tourist businesses, as well as on German-run farms, you can get along with German as well as English.

Not only the different landscape forms but also the animal species, which occur here in large numbers, attract visitors to Namibia.

Namibia was one of the most popular travel destinations in Africa as early as the 1950s. Today the country has international flight connections, a needs-based road network and a wide range of accommodation options. There are numerous sights on Namibia trips. In addition to a great number of natural monuments such as a petrified forest or the so-called fairy circles, there are also rock paintings and very scenic areas. The large areas also make tourists from neighboring countries dream.

Anyone visiting Namibia will quickly recognize that this is a very well-positioned country for tourism.

Here is a detailed list of the largest cities in Namibia.

Form of government: Namibia has been a republic since 1990 and is represented in the Commonwealth. The constitution dates from the same year. The Parliament is composed of the National Assembly with 72 members and the National Council with 26 members. The head of state is directly elected every 5 years. Namibia became the last colony in Africa to become independent of South Africa on March 21, 1990.

Largest lake: Guinassee, 0.6 ha. Lake Guinas is one of only two lakes in Namibia that are constantly filled with water. The other lake is Lake Otjikoto (0.51 ha). The areas of the lakes are subject to fluctuations.

Language: The official language is English (7%). Afrikaans (60%) is colloquial. German (32%) is common; numerous African languages ​​such as Oshivambo, Nama and Herero are also spoken.

Religion: Christians (80 to 90%, half of whom are Lutherans), a minority of 10 to 20% are followers of traditional religions.

Namibia is between 18 ° and 30 ° south latitude and 12 ° and 25 ° east longitude. In the northern hemisphere, this corresponds approximately to the location of Libya and northern Chad. Namibia is bordered by the Kalahari in the east to Botswana, by the Oranje – also known as the Orange River in the south to South Africa, bythe South Atlantic in the west andby the Kunene and the Okawango in the north to Angola. In the northeast, an approximately 450 km long and up to 50 km wide land finger extends between the neighboring countries Angola and Zambia to the north and the southern border of Botswana – the Caprivi Strip.

Here you can find a detailed topographic map of Namibia.

In addition to the border rivers, there are numerous other rivers, of which, apart from Kwando and Kavango in the Caprivi, not a single one carries water with certainty all year round. Outside the rainy season, there are only dry river beds (riviere).

The entire national territory of Namibia covers approximately 824,292 sq km and is therefore more than twice the size of Germany. Namibia is essentially shaped by two deserts: in the west by the Namib, which extends from the Cape Province to Angola, and in the east by the Kalahari. Between the two deserts lies the 1,700 m high inland highlands, around the capital Windhoek also the inland highlands that exceed the 2,000 m mark. However, the highest mountain – the approximately 2,600 m high Königstein in the Brandberg massif – is located near the coast, approx. 200 km north of the coastal town of Swakopmund. In the east, the inland highlands gradually merge into the 1,200 m high Kalahari highlands, which are covered by dry vegetation.

This map of the population distribution in Namibia was created by the Worldmapper team. Densely populated areas appear bloated, the area of ​​sparsely populated areas is reduced. The shape of the grid has been preserved; an underlying map with the original geographical extent helps interpret the map. The distorted map should help to present abstract statistical information clearly. 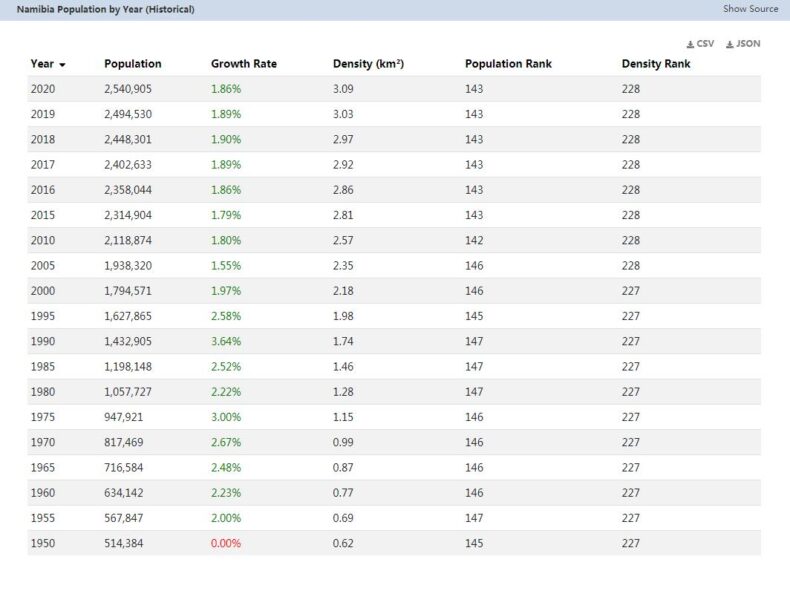 Passport: is generally required for trips to Namibia, the passport must be valid for at least 6 months after the stay and should contain at least 2 free pages.

Visa: Generally required, with the exception of citizens of the following countries for a tourist stay of up to 3 months (unless otherwise stated) who receive an entry permit free of charge upon entry:
EU countries and Switzerland (exceptions: Bulgaria, Estonia, Greece, Latvia, Lithuania, Malta, Poland, Romania, Slovak Republic, Slovenia, Czech Republic, Hungary and Cyprus).

Validity: Tourist Visa, Business Visa: Up to 3 months. An extension (max. 90 days) is possible and should be requested in good time from the Ministry of the Interior in Windhoek or from the respective Namibian representation. However, this process can take a long time and is not always successful.

Application: In person or by post at the consular section of the embassy.

Documents for travelers who need a Visa for Namibia:

Tourist Visa: passport that must be valid for at least 6 months after the return date and still has at least 2 free pages – 2 completely and originally filled out application forms (no copy, no fax) – 2 passport photos (no scans) – return ticket (Copy) or travel booking confirmation – fee (cash or euro check)

Business visa : additionally a company letter from the German company about the purpose and duration of the trip with a confirmation of the cost assumption and an invitation from the Namibian business partner

When applying by post, a sufficiently stamped envelope must be enclosed.

Entry with pets: Special regulations apply to the import of dogs and cats. Applications for this are available from the Embassy of Namibia (see Namibia – important addresses).
Rodents and birds are generally not allowed to be imported into Namibia.