Nigeria, located on the Gulf of Guinea and thus the mouth of the Niger, is the most populous country in Africa. 250 different peoples and at least as many religions, views and ways of life can be found in Nigeria. This often makes maintaining a unified state difficult and often leads to conflict. However, the diversity of cultures and peoples also from the charm and uniqueness of Nigeria.

Of the tourism in Nigeria is hardly developed due to political difficulties. One of the biggest attractions in the country are the national parks, where you can still see West Africa’s wildlife. Also worth seeing are the northern towns of Haussa, e.g. Kano, Katsina and Zaria. Especially Kano on the edge of the Sahel zone with the old town made of clay, the Emir Palace and the impressive mosque is worth a visit.

In addition to the peoples and the various rites that are so impressive for tourists, there are also interesting cultural sights in Nigeria. There is an extensive art collection in the National Museum of Nigeria in Lagos. This consists largely of sculptures and paintings as well as the famous wood carvings from Benin and Ife. The terracotta figures from the Iron Age Nok culture are also worth seeing.

There are many different cultural influences in the numerous peoples of Nigeria. The north of Nigeria is Islamic, the majority of the population in the north belongs to this religion. Some of the Islamic Arab festivals are only celebrated in northern Nigeria. The European-Christian influences, however, can be clearly felt in the south of the country.

Nigeria celebrates its national day on October 1st. In 1960, independence from Britain was achieved on that day. This is celebrated every year with a big festival.

Here is a list of the major cities in Nigeria.

Form of government: Nigeria has been a presidential federal republic since 1979, which is represented in the Commonwealth (but suspended from 1995 to 1999. The current constitution dates from 1999. The bicameral parliament is made up of the House of Representatives with 360 members of parliament and the Senate with 109 members, elections are held every four years, and Nigeria has been independent of the UK since October 1, 1960.

Head of government and Head of state: President Goodluck Jonathan, since 06.05.2010

Language: The official language is English (which is not understood everywhere). The three main Nigerian languages ​​are Yoruba, Ibo (Igbo), Hausa and Fulani, and 400 other languages ​​are also spoken.

Religion: 50% Muslims (especially in the north), 40% Christians (especially in the south) and 10% followers of traditional religions. The numerous ethnic groups in Nigeria differ enormously in terms of language, culture and history. The three largest peoples are the Muslim Hausa in the north, the Catholic Ibo in the east and the Yoruba in the west, where traditional religions are still often practiced.

Local time: CET. In Nigeria there is no changeover between summer and winter time.
The time difference to Central Europe is 0 h in winter and -1 h in summer

Nigeria lies in the transition area between west and central Africa and borders on Niger in the north, Chad in the northeast, Cameroon in the east and Benin in the west. To the south is the Gulf of Guinea, including the Bay of Benin and the Gulf of Biafra.

Here you can find a detailed topographic map of Nigeria.

The south is particularly densely populated, while the central area has the lowest density. The urbanization process has accelerated enormously since oil has played a dominant role in the Nigerian economy. One of the measures to achieve a more even distribution of population and wealth was to move the central administration from the port city of Lagos to Abuja, located inland.

The landscape and vegetation are very different regionally. The broad valleys of the Niger and Benue rivers characterize the transitions between the different regions and make a rough division possible.

The relatively narrow coastal region is flat and, with the exception of the rocky coast in the far southeast, consists of lagoons, estuaries, sandy beaches and mangrove swamps. The coast is only wider in the alluvial area of ​​the Niger Delta. The flooding of the mud carried by Niger in the estuary forms a relatively fertile soil and leads to the expansion of the great delta towards the sea.

From here the landscape changes into savannah and open forest areas with individual hilly countries (Yoruba and Udipateau, Oban Hills), the heights here are about 300 to 500 m. The landscape west of Niger consists of an unevenly structured hill area (up to 300 m).

The rivers Benue and Niger meet in the central part of the country, here is the northern plateau with the Jos plateau (1,735 m). In the southeast, the Shebshi Mountains (with the highest elevation in Nigeria, the 2,419 m high Chappal Waddi) stand out on the border with Cameroon. Both belong to the mountain frame of the Chad Basin. From the Jos plateau, the country descends northwest to the Sokoto plain and northeast to the Bornu plain.

The north is already in the southern foothills of the Sahara and consists of desert and semi-desert.

This map of the population distribution in Nigeria was created by the Worldmapper team. Densely populated areas appear bloated, the area of ​​sparsely populated areas is reduced. The shape of the grid has been preserved; an underlying map with the original geographical extent helps interpret the map. The distorted map should help to present abstract statistical information clearly. 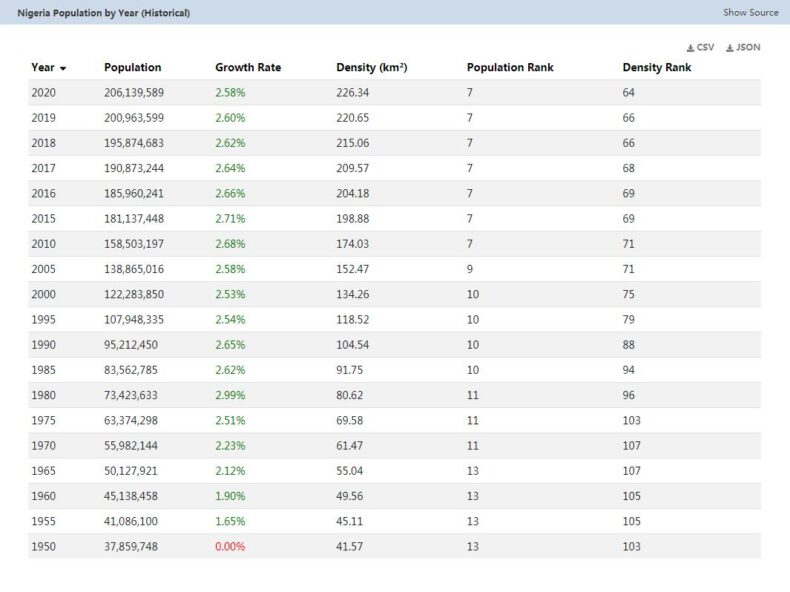