A country with huge potential – but like so many countries in Africa, the Central African Republic uses its optionsnot nearly anywhere. Although the country is rich in minerals, very little of the population’s income is still received today.

For decades, central Africa has been plagued by incompetent and corrupt governments, and Bokassa is probably best memorized by the West. With French and Libyan help, he exercised a bizarre regime in the Central African Empire from 1966 to 1979.

The Central African Republic is a relatively humid country. A large part of the country is covered by wet savannah and tree savannah. In between there are always clear forest spots. Further north there is a somewhat barren and drier region, which finally ends in the dry savannah. In addition to monkeys, elephants and antelopes, many rare birds and reptiles live in the Central African Republic. Hippos can be seen in and around the waters.

The population is as diverse as the country itself. The pygmies were the first residents of this area. But this group has been pushed back strongly and so only a few pygmies are at home in the Central African Republic. The south of the Central African Republic is mainly populated by Bantu. Various Sahelo-Sudan populations can be found in the north. Representatives of the Azande peoples live in the eastern part of the country, who make up 15 percent of the total population.

Population: 4.95 million people (July 2011, COUNTRYAAH.COM). The peoples that first populated the Central African region, the pygmies, have been greatly decimated, the last pygmies inhabit the inaccessible rainforest regions. Bantu peoples of the Ngala group dominate in the south of the country, while Sara and nilotide Runga live in the north and Azande peoples live in the east. The largest peoples are Baya (33%), Banda (27%), Mandjia (13%), Sara (10%), Mboum (7%), M’Baka (4%) and Yakoma (4%).
A few thousand Europeans, mostly French, live in the cities. The highest population density outside the cities can be found along the waterways, while the rainforest regions and dry savannas are almost deserted.

Population density: 7.9 people per km², one of the lowest in Africa.

Form of government: On August 13, 1960, the Central African Republic gained independence from France. The country has been a presidential republic since 1986, the constitution dates from 1995. The National Assembly (the Parliament) has 105 members who are elected every five years. Universal suffrage was introduced in 1995.

Head of state: President François Bozizé since March 15, 2003, in 2005 and 2011 he was confirmed by elections in office, at the same time he is Minister of Defense.

Religion: About 35% of the population believe in traditional African religions, 25% are Protestants, 25% are Catholics and about 15% are Muslims. The indigenous religions have a strong influence on the Christian faith in the Central African Republic.

Local time: CET
There is no changeover between summer and winter time in the Central African Republic.
The time difference to Central Europe is 0 h in winter and -1 h in summer

Mains voltage: 220/380 V, 50 Hz. However, electricity is only available in larger places and here too there can be power failures.

The Central African Republic is a landlocked country (no access to the sea). The country is largely on the plateau of the north equatorial threshold, the greatest heights (up to 1,420 m) are reached in the west in the border region with Cameroon.

In the northeast the Bongo massif reaches a height of 1,400 m, in the north the hilly landscape of Central Africa gradually lowers to the basin landscape in Chad.

The north equatorial threshold forms the watershed between the river area of Lake Chari, which flows into Lake Chad, and the catchment area of ​​Oubangui, which flows south and flows into the Congo.

The Oubangui is navigable south of the capital. The numerous waterfalls offer opportunities to generate hydroelectricity.

Here you can find a detailed topographic map of the Central African Republic.

The southwest is covered by dense tropical rainforest. This part of the country is one of the last refuge for forest elephants and lowland gorillas.

Most of the country, however, consists of rolling hills with wet savannas (tree savannas) and a flat plateau with dry, light deciduous forests, which were partly destroyed by bushfires or turned into savannah by deforestation. In the north the landscape changes into dry savannah.

This map of population distribution in the Central African Republic was created by the Worldmapper team. Densely populated areas appear bloated, the area of ​​sparsely populated areas is reduced. The shape of the grid has been preserved; an underlying map with the original geographical extent helps interpret the map. The distorted map should help to present abstract statistical information clearly. 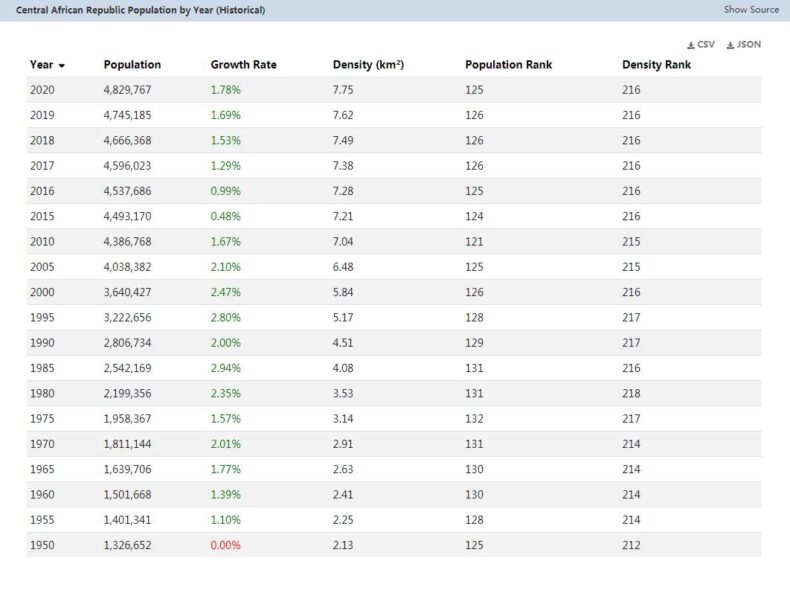