The two volcanic islands Sao Tomé and Príncipe are located in the golf from Guinea 200 km off Africa’s west coast and are Africa’s second smallest country after the Seychelles. This tropical paradise is hardly known among travelers, only about 20 visit each week tourists Sao Tome and Principe. There is a lot to discover here: species-rich rain forests in the interior, crystal-clear diving and snorkeling spots off the coast, colonial Portuguese architecture in the cities. Apart from that, coffee, cocoa and seafood on the islands are terrific!

The archipelago Sao Tome and Principe consists of several smaller islands. The two islands that give the group of islands their names lie exactly between the islands of Bioko and Annobon (Equatorial Guinea).

The far larger of the two islands that belong to the country is Sao Tome. It is 48 kilometers long and 32 kilometers wide. Over 90 percent of the population of Sao Tome and Principe also live here. The capital, which has the same name as Sao Tome as the island, is also located here. The special thing about Sao Tome Island is that its tip almost touches the equator. The small island of Rolas is located south of the equator, just opposite the main island of Sao Tome.

Principe, on the other hand, is only 16 kilometers long and therefore offers much less living space for humans and animals than the neighboring island.

As an official language in Sao Tome and Principe Portuguese used. There are also some dialects and linguistic variations of Portuguese, and some Creole languages ​​based on Bantu languages ​​are also spoken.

The climate is humid tropical, with the island of Sao Tome receiving more rain than the other islands due to the towering mountains.

Density: 186 people per sq. Km, one of the highest in Africa.

Here is a detailed list of the largest cities in Sao Tome and Principe.

Form of government: Sao Tome and Principe has been a republic since the declaration of independence from Portugal on July 12, 1975. The constitution dates from 1990. The National Assembly Assembleia Nacional has 55 members. The head of state is directly elected every 5 years.

Language: the official language in Sao Tome and Principe is Portuguese. In addition, some Creole languages ​​based on the Portuguese and western Bantu languages ​​are spoken, including Saotomense, Principense and Angolar, and in some cases also English and French.

Local time: CET – 1 h
There is no daylight saving time change in Sao Tome and Principe.
The time difference to Central Europe is -1 h in winter and -2 h in summer.

Ship: Every now and then cruise ships call at the port of Sao Tome. Freight ships also sail between Libreville (Gabon) and Sao Tome at irregular intervals, but these are not very safe. 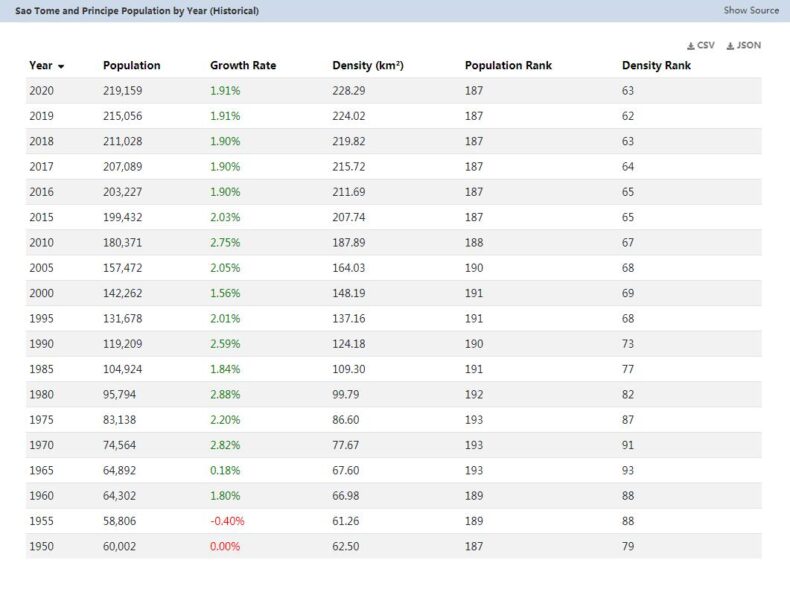 The southern tip of Sao Tomés extends to the equator.

Sao Tome and Principe consist of two main islands, with Sao Tome being the much larger of the two with 836 sq km (Principe: 128 sq km). There are also some smaller rock islands in front: Pedras Tinhosas, Cabras, Rolas and Gago Coutinho.

The largest island, Sao Tome, is about 48 km long and 32 km wide. It is more mountainous than the island of Príncipe, the highest elevation is 2,024 m.

The island of Príncipe, on the other hand, is only 16 km long and 6 km wide, the highest point on Príncipe is 927 m high.

The vast majority of the population (more than 90%) live on the large island of Sao Tomé, where the capital Sao Tomé is also located.

Both islands are the visible peaks of a volcanic mountain range. This chain begins in the north at Mount Cameroun (Cameroon) and the island province of Equatorial Guinea (Bioko), at the island of Pagalu the chain disappears into the sea. However, volcanoes are no longer active on Sao Tomé and Principe. The volcanic origin also explains the great fertility of the soil.

The landscape on the islands is rugged and covered by tropical rainforest. Numerous streams and rivers strive towards the coast. On the west side, the country rises steeply from the sea. The east is flat, several bays can be found here. In the south, the plain is covered with slag and volcanic ash.