Parts of today’s Malawi belonged to the Portuguese colonial empire in the 17th century, but only that Scottish Missionary Livingstone discovered the third largest lake in Africa – Lake Malawi. Today, this exceptionally species-rich lake with its crystal clear water and beautiful beaches is the main attraction in Malawi and attracts numerous traveler to Malawi.

The landlocked country is rich in natural beauty. You should take a close look at the beauty of these sights – as a visitor you are immediately fascinated. The huge Kapichira waterfalls are among the tourist destinations that both tourists and locals like to visit. The height and the enormous amount of water that plunge here take your breath away.

The aforementioned Lake Malawi is a popular excursion destination in Malawi, as is Lake Malombi. Hikes on the Mulanje mountain are adventurous and scenic. You can also hire mountain guides here as a visitor.

Malawi wants to protect its natural sights, so some national parks have been established. It is definitely worth visiting Kasungu National Park, Lake Malawi National Park, Lengwe or Liwonde National Park. On the other hand, unique views can be enjoyed from the Mulanje massif or the Nyaka plateau – Malawi is worth a trip.

In Malawi there are different vegetation zones. Savannahs predominate on the plains, because the climate here is rather dry. A few open glass corridors can also be found here. In the course of time, the formerly dense forest was cleared over a large area, today it is clearly cleared and very dry in places. The wood was cut by settlers who used it as fuel and lumber. Today one tries with targeted afforestation to increase the forest stock again.

Here is an accurate and up-to-date list of the largest cities in Malawi.

Form of government: Malawi has been a presidential republic since 1966 and is represented in the Commonwealth. The current constitution has been in force since 1995. The National Assembly consists of 193 deputies who are elected every 5 years. The first free elections since 1964 took place in 1994. Malawi has been independent of Great Britain since July 6, 1964.

Head of government and Head of state: President Joyce Banda, since April 7, 2012

Lowest point: Shire river on the border with Mozambique, 37 m

Local time: CET + 1 h.
There is no changeover between summer and winter time in Malawi.
The time difference to Central Europe is +1 h in winter and 0 h in summer.

Mains voltage: 220/240 V, 50 Hz. Square three-pin plugs are used in modern buildings. It is recommended to take an adapter with you.

Here you can find a detailed topographic map of Malawi.

A large part of Malawi’s land area is in the area of ​​the East African trench system. The relief is mainly determined by plateaus and isolated island mountains, extensive plains and Lake Malawi.

Lake Malawi is the third largest lake in Africa and forms the eastern border with Tanzania and Mozambique. The northern region is mountainous, the highest peaks rise up to 3,000 m. In the north are the Nyika and Viphya plateaus. The central region is used for agriculture. It largely consists of a 1,000 m high level. Flatlands predominate in the southern region, the Zomba plateau extends in the south of Lake Malawi and the Mulanje massif is in the southeast.

The Mulanje massif forms an impressive elevation on a plain mainly covered with tea plantations, the highest peak is the Sapitwa (3,002 m).

The longest river in Malawi is the Shire with a length of 402 km. It flows from Lake Malawi in the south, flows through Lake Malombe and flows into the Zambezi in Mozambique.

This map of the population distribution in Malawi was created by the Worldmapper team. Densely populated areas appear bloated, the area of ​​sparsely populated areas is reduced. The shape of the grid has been preserved; an underlying map with the original geographical extent helps interpret the map. The distorted map should help to present abstract statistical information clearly. 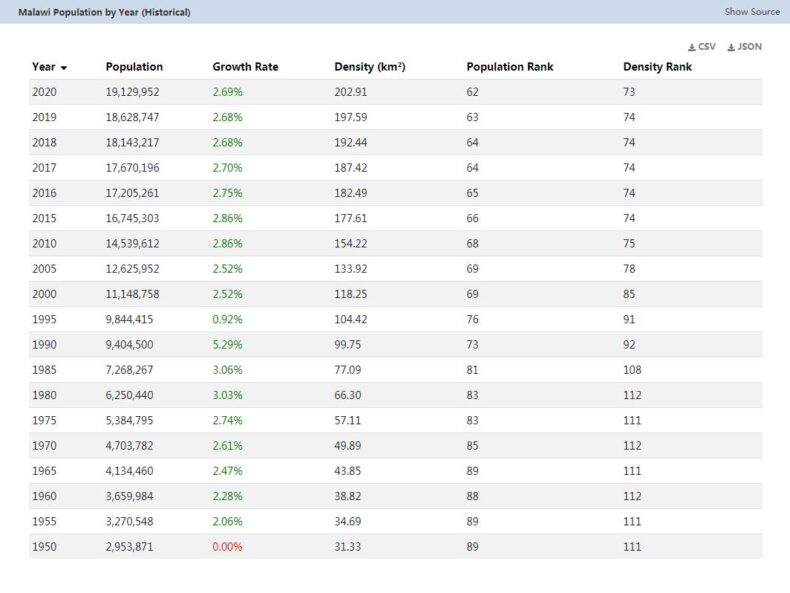 Passport: Generally required for travel in Malawi, the passport must be valid for 6 months beyond the planned length of stay.

Transit: Transit travelers who travel within 24 hours, have valid documents for the onward journey as well as reserved seats and do not leave the transit room do not need a transit visa.

Validity: Transit Visa: 7 days. Tourist Visa: 3 months (single entry) or 6 or 12 months (multiple entry) from the date of issue. There is the possibility of a visa extension, application to the Immigration Department in Blantyre.

Application: consular section of the embassy

Travelers who require a visa require the following Documents: 2 completed, original visa applications (no copies or fax) – 2 passport photos (no scans) – fee (in cash) – passport still valid for at least 6 months – travel booking confirmation for the outward and return flight

Business visa: additionally a company letter from the German company about the purpose and duration of the trip with a confirmation of the assumption of costs.

Processing time: Personally immediately, by post between one and two weeks.