The name Angola comes from the title Ngola of the Kings of Ndongo, an important African kingdom that existed in the region of today’s Luanda from around the 15th century to 1671. This name was first used by Portuguese seafarers who landed here on the African coast and built a Padrão, a stone cross of possession for the Portuguese king.

After a 40-year civil war, calm and stability are currently returning to Angola. Of course, the infrastructure is still poor and tourism is in its infancy, but it is now safe to travel through Angola again. If you are willing to forego comfort and convenience and love adventure, traveling through Angola is a wonderful experience. You will meet some of the friendliest people in Africa, you will discover pristine beaches and you can enjoy breathtaking views.

The country has a music scene recognized in Africa. Well-known pop musicians are currently Waldemar Bastos, Paulo Flores, Bonga and Mario Gama, whose music also finds many admirers and listeners in this country.

There is a beautiful folk song in Angola. It is called Kumbaya, some may even know this melodramatic piece from the German translation. The song is said to be rooted in the Gullah language. However, this is controversial among linguists, because there are different influences in this folk song, which makes it difficult to determine the origin. The Gullah language belongs to the Creole languages ​​and was originally in the coastal regions of Georgia and South Carolina spoken. If at any time it turns out that this version of the genesis is actually true, then the famous song will have immigrated to Angola with American missionaries. However this beautiful song came into the country, it is one of the most famous and most sung chansons in Angola today.

Area: 1,246,700 km². Angola is almost four times larger than Germany and one of the largest countries in Africa.

Population: 13.34 million people (July 2011, COUNTRYAAH.COM). Almost the entire population belongs to Bantu peoples with many ethnic sub-groups. The three largest are Ovimbundu (37%), Kimbundu (25%) and Bakango (13%). Other smaller groups are Chokwe (sometimes called Lunda), Ganguela, Nhaneca-Humbe, Ambo, Herero and Xindea. In addition, 2% of the population are racially mixed between Europeans and Africans and 1% white people with mainly Portuguese ancestors. The Portuguese are the largest non-Angolan group with around 30,000 people.

Population density: 10.7 people per km². Angola is one of the most sparsely populated countries in Africa.

Here is a current list of the largest cities in Angola.

Form of government: Angola has been a presidential republic since 1975, the constitution dates from 2010. In September 2008 the national assembly (parliament) was elected. The National Assembly consists of 223 deputies who are elected every 4 years. On November 11, 1975, Angola gained independence from Portugal.

Head of government: the office of prime minister was abolished with the new constitution from 2010

Head of state and head of government: José Eduardo dos Santos, since September 10, 1979. At the same time commander in chief of the armed forces.
The president is directly elected by the people for a 5-year term. At the beginning of 1999 the second round of the 1992 presidential election, which was still outstanding, was waived by agreement between President dos Santos and the President of UNITA Renovada.

Language: The official language is Portuguese. Most residents, however, speak Bantu languages ​​such as Umbundu, Kimbundu, Kikongo, Tchokwe, Ngangela, Oshiwambo and Otjiherero.

Religion: about 55 – 70% of the population are Catholics, 10 – 20% Protestants. However, almost all residents also belong to indigenous, traditional religions.

Local time: CET.
In Angola there is no change between summer and winter time. The time difference to Central Europe is 0 h in winter and -1 h in summer.

Angola is located on the southwestern coast of Africa. Angola borders the Democratic Republic of the Congo to the north, Zambia to the east, Namibia to the south and the Atlantic Ocean to the west. The name Angola goes back to the rulers of the Ndongo empire, whose title was “N’gola” and was transferred to the country by the Portuguese.

The country consists of a narrow lowland along the Atlantic coast that rises inland to a highland inland. To the north, east and south, several large rivers drain this highland, which covers almost the entire area of ​​the country. In the east of Angola there is a wide plain with dry savannas, which is only sparsely populated.

North of Angola, the Exclave Cabinda is surrounded by the Democratic Republic of the Congo and the Congo. The discovery of several oil fields off Cabinda’s coast has made the enclave the center of foreign business interests in Angola.

Here you can find a detailed topographic map of Angola.

The wide plateaus of Central Angola sink north and south towards the Congo and Kalahari basins. Towards the west, they bulge up to the outskirts, which in its highest elevation, Mount Moco, reaches 2,610 m. This ridge, which is typical for large parts of southern Africa, breaks off in several stages to the coastal plain. The coastal area is up to 200 kilometers wide and mostly consists of younger deposits of the Cretaceous, Tertiary and Quaternary.

Most of the country is occupied by the continental base of very old Precambrian rocks, which consists of crystalline slate, gneiss, but also large granite breakthroughs and in the lower parts, i.e. towards the basins, of younger deposits, such as the mighty Kalahari Sands is covered.

The coastal landscape, which is by no means always flat, breaks off over long distances in a cliff coast up to 50 m high to the sea. Bays form where the mountain ranges run towards the sea. Directed due to the parallel to the coast to the north Benguela flow generated at the projections spits. Behind them are some good natural harbors that served the Portuguese as bases early on.

The rivers Cuanza and Kunene break through the outskirts and form rapids and waterfalls like the imposing Ruacana Falls of the Kunene.

The vegetation structure in Angola corresponds to the decrease in precipitation from north to south and consists of wet savannah in the north with forests along the rivers. Dry savannah grows in the highlands and also on the coast, partly with rain-green forests and in the south thorn-bush savannah with thorn bushes and acacias. The coastal strip south of Mocamedes is full desert, a continuation of the Namib.

The soils in the highlands often consist of red earth, red and yellow loam and are only partially fertile. In addition, they were devalued in many places by human intervention. Soil erosion is very strong.

Little is left of the originally very rich African wildlife. Lions and elephants are rare, numerous are antelope species.

This map of the population distribution in Angola was created by the Worldmapper team. Densely populated areas appear bloated, the area of ​​sparsely populated areas is reduced. The shape of the grid has been preserved; an underlying map with the original geographical extent helps interpret the map. The distorted map should help to present abstract statistical information clearly. 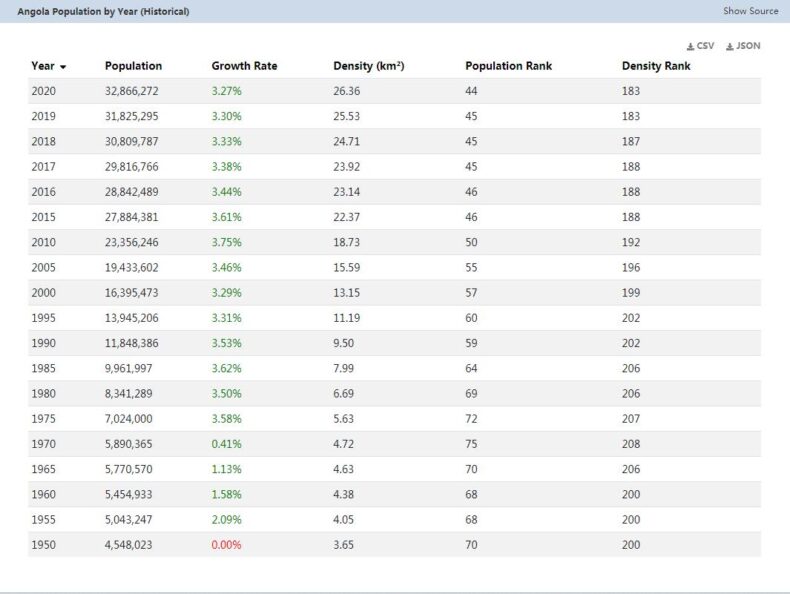