In Morocco, the stranger is very close. Morocco is separated from Europe only by the Strait of Gibraltar, and yet the visitor embraces the strange world of the Orient with its busy life and historical evidence. The royal cities of Fez, Meknes, Rabat and Marrakech are centers of Islamic art and culture. In the south of Morocco, between Quarzazate and Tinehir, the route is lined with dozens of kasbahs, ancient mud castles, once built by warlike Berber tribes.

The name Morocco is derived from Marrakech, which was called “Marruecos” by Europeans. The Arabs call this African region El Maghreb-el-Aqsa, which means “the extreme west”. This relates naturally on the fact that Morocco is located on the extreme northwestern corner of Africa.

Meet on the Strait of Gibraltar Africa and Europe, Atlantic and Mediterranean, Islam and Christianity. Morocco is an island between three seas: the Mediterranean in the north, the Atlantic in the west and the sandy Sahara in the south.

The coasts of Morocco are very different: the Mediterranean coast is mountainous with lonely bays. On the Atlantic coast there are miles of wide sandy beaches, repeatedly interrupted by white port cities. In Agadir, Morocco’s travel hotspot, there are numerous hotels and restaurants.

In addition to the Mediterranean and Atlantic coasts, the western foothills of the Sahara with their oases are popular travel destinations on any Morocco tour. In contrast, you can go skiing in the western regions of the High Atlas.

Morocco has been the western cornerstone of Islam for more than 1,200 years. Religion not only shapes everyday life, it also influenced art and culture in Morocco. The Moorish art is particularly spectacular in the imperial cities Fez, Marrakech, Meknes and Rabat. Moroccan rulers built numerous buildings here for their and Allah’s glory.

Population: 31.97 million people (July 2011, COUNTRYAAH.COM, including Western Sahara 32.48 million people). This makes Morocco one of the most populous countries in Africa. About 20% of Moroccans are of Arab origin. The Berbers (who make up about 80% of the population, almost 60% are Arabized) are mostly sedentary farmers. Only a few still live as nomads or semi-nomads in the Middle Atlas or in the east of Morocco. Northern Morocco is dominated by Arabs (34% Arabs, 25% Arabized Berbers), southern Morocco is more Berber. Around 60,000 foreigners live in Morocco, mainly French, Spanish, Italian, Tunisian and Algerian.

Here is a complete and current list of the largest cities in Morocco.

Form of government: Morocco has been a parliamentary monarchy since 1972, the constitution dates from the same year. The last constitutional change was made in 1996. The bicameral parliament consists of the National Assembly with 325 and the Upper House with 270 members. Morocco has been since. March 2, 1956 independent of France and Spain.
The political status of Western Sahara is unclear. Morocco claims the territory, but the Democratic Arab Republic of Sahara is recognized by 29 members of the Organization of African Unity and a further 77 countries.

Language: The official language in Morocco is Arabic, but Berber languages ​​are also often spoken. The second language is French, which is mainly spoken in business, government and administrative circles. Spanish is also spoken in the north, and English is often spoken in the cities and tourist centers.

Local time: CET – 1 h.
In Morocco there is no changeover between summer and winter time.
The time difference to Central Europe is -1 h in winter and -2 h in summer.

Morocco is not a particularly large country by African standards, but the existing landscape forms are very diverse. Morocco can be divided into several regions: the coastal regions in the north and west, the Atlantic region with the Moroccan Meseta (plateau), the mountain region, with the Rif Mountains and the High and Middle Atlas as the most important mountains, and the transmontane region in the border region with Algeria, which is characterized by the anti- atlas, plateaus and basin landscapes on the edge of the Sahara.

Here you will find a detailed topographic map of Morocco and Western Sahara.

The northern coast to the Mediterranean is mostly rocky, steep and divided by numerous bays and capes. The only major basin on the Mediterranean coast is located near Algeria in the mouth of the Moulouya River. To the west is the crescent-shaped northwest tip of Africa.

In contrast to the Mediterranean coast, the coast to the Atlantic is flat and only slightly structured. At the end of the coast there are wide coastal plains (including the lowlands of Kenitra or the coastal plateau at Casablanca). Further inland, in the center of the Moroccan plateau (Meseta, an extensive table country), heights of approx. 450 m are reached. The steppe-like landscape is slightly wavy here, island mountains rise only occasionally.

To the south and east of the Meseta plateau are the mountain ranges from the High and Middle Atlas. This huge fold mountain range was created in the Tertiary through the meeting of the Eurasian and African continental plates. The disastrous Agadir earthquake in 1960 showed that geological processes continue to this day. The Atlas Mountains represent a barrier to Morocco’s nature and economy. The Atlantic and Mediterranean regions, which are separated by the Atlas and southern Morocco, are also different in terms of climate.

The High Atlas describes a slight curve over its approx. 800 km extension from the southwest to the northeast. Due to the prevailing rugged forms and the steep peaks, the High Atlas character is high mountain. The highest elevations in North Africa are reached here, the highest peak at 4,165 m is the Jabal Toubkal.

The High Atlas flattens to the northeast to the Algerian Sahara Atlas, to the north of the High Atlas is the approx. 300 km long Middle Atlas. For the most part a low mountain range, the peaks of the Middle Atlas in the east reach more than 3,000 m. The northern region of the Atlas Mountains in Morocco is formed by the rugged arch of the Rif Mountains (highest elevation 2,465 m). The Rif Mountains run from the Strait of Gibraltar along the Mediterranean coast to the Moulouya River. The “Gate of Taza”, a longitudinal furrow located between the Rif and the Middle Atlas, is the most important west-east valley in Morocco.

The Moulouya Valley separates the montane and transmontane regions in northern Morocco. In the east of this valley, the landscape slowly rises in steppe-like plateaus, which merge into the Algerian highlands. In the southeast of the atlas are the anti-atlas and its eastern continuation Jabal Sarhro. These belong to the old African mass. Saharan outskirts such as the Tafilalt basin region and the Draa valley occur in southern Morocco.

This map of population distribution in Morocco was created by the Worldmapper team. Densely populated areas appear bloated, the area of ​​sparsely populated areas is reduced. The shape of the grid has been preserved; an underlying map with the original geographical extent helps interpret the map. The distorted map should help to present abstract statistical information clearly. 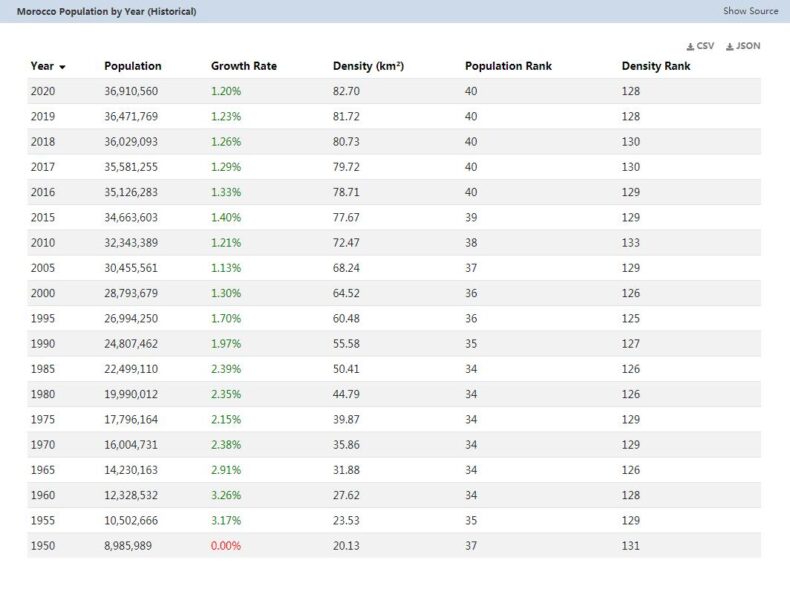