The name Botswana is derived from the Tswana people who live in the country Botswana represents the majority of the population.

Botswana is often referred to as the model country of Africa, because since its independence in 1966 it has had a free and democratic basic order and a government legitimized by regular elections. This stability makes Botswana a very popular holiday destination in southern Africa. The annual economic growth Botswana is regularly the highest of all African countries. This enormous growth is based on diamond exports, which, thanks to the discovery of three of the richest diamond mines in the world, made Botswana the world’s largest producer of jewelry diamonds shortly after independence was declared.

The country between Namibia, Zambia, Zimbabwe and South Africa is characterized by two fascinating contrasts. On the one hand, Botswana consists of 80 percent Kalahari Desert to the other, the approximately 15,000 sq km Okavango Basin offers hundreds of animal species, a lot of forest and countless small waterways that eventually become lagoons. Especially during the rainy season, you can marvel at a unique flora and fauna on trips and safaris.

Population density: 3.6 residents per km², after Namibia the most sparsely populated country in Africa.

Here is a list of the major cities in Botswana.

Form of government: Botswana has been a presidential republic since 1966 and is represented in the Commonwealth). The constitution dates from the same year, the last change was made in 1997. The bicameral parliament is made up of the National Assembly with 47 members and the advisory House of Chiefs with 15 members. The head of state is directly elected every 5 years. Botswana has been independent of Great Britain since September 30, 1966.

Lowest point: confluence of the Limpopo and Shashe River, 513 m

Language: the official languages ​​in Botswana are English and Setswana. Kalanga and Sekgalagadi are also spoken. Without knowledge of the English language, a stay in Botswana is difficult.

Local time: CET +1 h. In Botswana there is no change between summer and winter time.
The time difference to Central Europe is +1 h in winter and 0 h in summer.

Botswana borders in the west and north with Namibia, in the south with South Africa, in the east with Zimbabwe and at one point in the northeast with Zambia.

Here you can find a detailed topographic map of Botswana.

Inland Botswana is located in the tropical high basin of southern Africa, a little over 1,000 m above sea level. The vast majority of the country is covered by the Kalahari, a largely flat thorn savannah in which only extensive livestock farming is possible. The Kalahari extends on a plateau from 1,000 to 1,100 m high.

In the southwest, sand dunes up to 12 m high dominate the picture. The inland delta of the Okawango spreads out in northern Botswana as a striking wetland. To the south of Lake Ngami and to the southeast of Makgadikgadi salt pan. The Okawango originates in the area of ​​the wet savannah of Angola and is divided into many branches of water due to the low gradient on the Kalahari basin. This creates a fantastic swamp landscape. Due to the strong evaporation and the lack of rain, the river ends in an inland delta without reaching the sea.

Dry forest, where mopane trees predominate, can only be found along the northeastern border.

While archaic rocks such as gneiss and granite, some of which contain mineral resources, are widespread in the east of the country, sedimentary rocks from ancient times lie beneath the Kalahari sands in the middle of the country.

This map of population distribution in Botswana was created by the Worldmapper team. Densely populated areas appear bloated, the area of ​​sparsely populated areas is reduced. The shape of the grid has been preserved; an underlying map with the original geographical extent helps interpret the map. The distorted map should help to present abstract statistical information clearly. 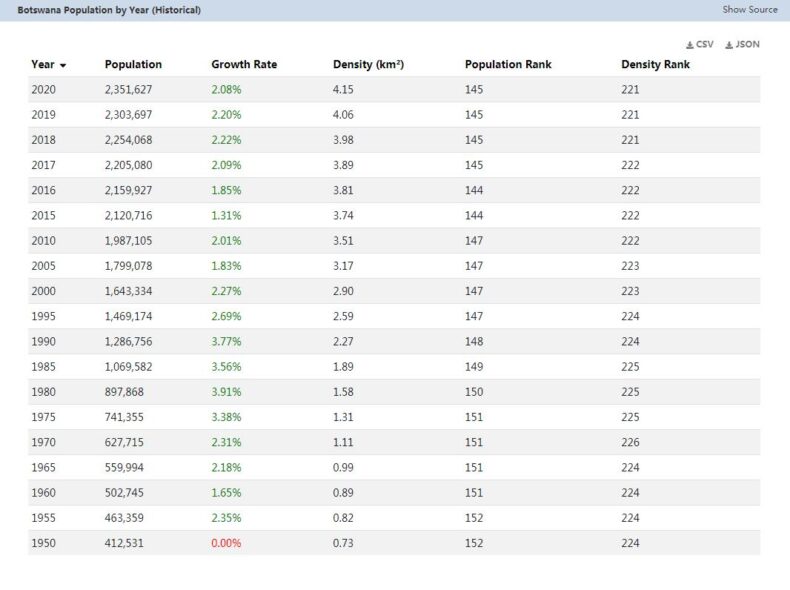