Gambia is the smallest country on the mainland of Africa. In West Africa, on the Atlantic Ocean, it lies on both sides of the West African Gambia River. It is surrounded in the north, east and south by the neighboring country Senegal, which is almost 20 times as large and with which close relations are maintained. The Gambia itself is around 480 km long, but at its widest point it is less than 50 km wide.

Unification efforts between Francophone Senegal and Anglophone Gambia have been abandoned.

In addition to the landscape, the Gambia is also a state that (like all countries in West Africa) has a rich culture and long history. The largest part of the impressive culture is borne by the Mandinka population. With a share of about four tenths of the total population, these are most strongly represented in Gambia. The Fulbe have the second largest share, the Wolof the third largest. The rest of the population consists of different, mixed ethnic groups.

English has been the official language in The Gambia since 1965. This was introduced by the British in colonial times and has remained the “lowest common denominator” of the various peoples in The Gambia. All correspondence and official procedures are held in English. As a tourist in Gambia, you can assume that if you are fluent in English, you will be understood and understandable. English is even spoken in the hinterland, where there are no major cities, but mainly smaller villages. Not by all residents, but the younger generation is definitely fluent in English.

The residents are usually multilingual, which is of course due to the fact that there are many different ethnic groups. They all have different languages ​​or dialects. In order for everyone to be able to communicate with each other, the residents have to speak numerous languages. They learn this from childhood. Most Gambians speak several of the nine dominant languages ​​fluently, or have knowledge of the language in order to be able to communicate.

You can find a detailed list of the largest cities in The Gambia here.

Form of government: The Gambia has been a presidential republic since 1970 and is represented in the Commonwealth. The new constitution dates from 1997. The unicameral parliament is made up of 53 members, 48 ​​of whom are elected every 5 years and 5 are appointed by the head of state. The Gambia has been independent of Great Britain since February 18, 1965.

Head of state and head of government: President Yahya AJJ Jammeh, in power since a military coup on July 22, 1994

Highest point: unnamed elevation in the east of the country, 53 m

Language: The official language in The Gambia is English. Mandinka, Ful and Wolof are also common. Incidentally, Jola, Serahule and Arabic are also spoken.

For trips to the Gambia I recommend the Mandinka phrasebook from Kauderwelsch.

Religion: 90% of the population are Muslims, approx. 9% Christians and 1% animists.

Local time: CET -1 h. In Gambia there is no change between summer and winter time. The time difference to Central Europe is -1 h in winter and -2 h in summer.

Gambia is located on the west coast of Africa and, at 11,295 sq km, is the smallest country on the mainland of the continent (the state of Schleswig-Holstein has a comparable size). The approximately 740 km long border follows the course of the Gambia River for a length of about 375 km and a width of 10 to 50 km.

The Gambia’s unusual course of the border stems from the fact that the range drawn by the British cannons on the navigable part of the Gambia river was used – this area could be defended against France.

The image of the Gambian landscape is largely shaped by the Gambia River. The river has its source in the Fouta-Djalon Mountains in Guinea, winds from there to the west and forms a very elongated funnel mouth before it flows into the Atlantic at Banjul. Ocean-going ships can enter the estuary and even reach Kuntaur (240 km from the coast).

The small gradient in the Gambia means that salt water penetrates the country about 150 km, which is harmful for irrigation projects (salinization). The valley along the lower reaches is flat and swampy and has loamy soils.

In the middle of the country, the Gambia River is surrounded by alluvial soils. In the event of flooding, they can be used for rice cultivation.

The upper reaches of the Gambia to Georgetown flow through a deep narrow valley, which is dug into a low, flat sandstone plateau.

The highest peak in the country only reaches 53 m and is located in the far east of the country in the Upper River Region in the Jundala Forest Park on the border with Senegal. 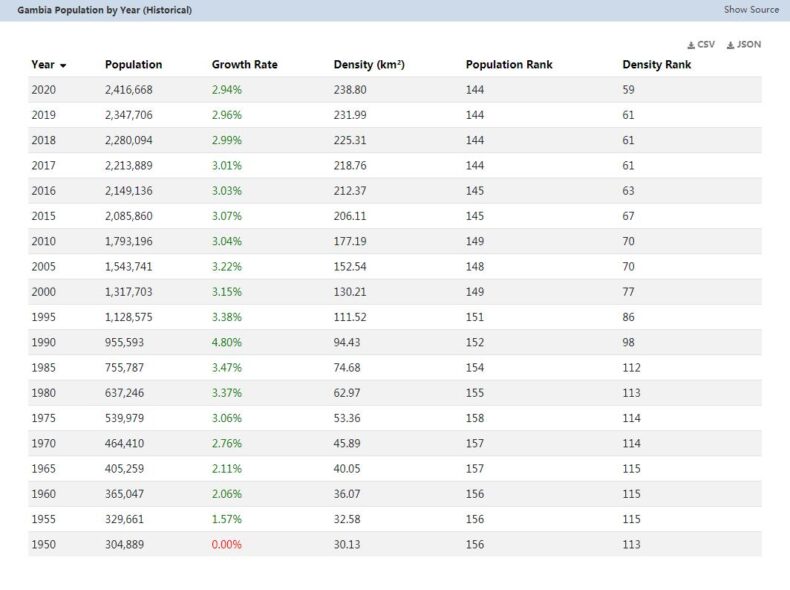