South Africa offers for vacation and Safari diverse attractions: from world famous national parks like the Kruger National Park to mountain landscapes like the Drakensberg or Cedarberg and Beaches on the Cape or Indian Ocean to the Garden Route – South Africa is “the world in one country”.

In 1652 the first supply post for ships of the Dutch East India Company was founded under Jan van Riebeck near the Cape of Good Hope on Table Mountain. Cape Town developed here, making it the oldest city in South Africa and also known as Mother City. In the course of time, the colonial rulers in South Africa changed: at first Dutch, in the meantime beset by France until it fell under the care of Great Britain.

After independence, political power in South Africa was taken over by the largely white, conservative National Party, which firmly anchored the apartheid system in daily life in South Africa. After many years of guerrilla warfare, the first fair elections were held in South Africa in 1994, freedom fighter and popular hero Nelson Mandela emerged victorious and became president of the country.

After the end of apartheid, tourism experienced an enormous boom, especially for travelers from Europe and America, the connection between original Africa and western standards is attractive. The 2010 FIFA World Cup in South Africa from June 11 to July 11, 2010 gave the tourism industry an additional boost, but even without this major event, South Africa was one of the most popular travel and safari countries in Africa.

South Africa trips can actually be made all year round. In the South African summer, Cape Town is warm enough for swimming. In contrast, the eastern part of South Africa is dry in winter, when you can go on safari in the Kruger National Park.

Capital: Pretoria (capital and seat of government, with suburbs more than 2 million residents).

Here is a current list of the largest cities in South Africa.

Head of government and Head of state: President Jacob Zuma, since May 9, 2009

Mains voltage: 220 V, 50 Hz. The sockets in South Africa are mostly 3-pin round plugs that can hardly be found in Europe. International adapters do not work, it is best to get a suitable adapter in South Africa. Some of the adapters are also lent to hotel receptions.

South Africa is located on the southernmost edge of the African continent and has a coastline that stretches for more than 2,500 km and lies on two oceans (the Atlantic and the Indian Ocean). It borders Namibia in the northwest, Botswana and Zimbabwe in the north, Mozambique and Swaziland in the northeast. Lesotho is completely enclosed by South Africa. The national area is 1,219,912 sq km, this corresponds to about 3.4 times the area of ​​Germany.

Here you can find a detailed topographic map of South Africa.

The central plateau, also called Highveld, lies at an altitude between 900 and 2,000 meters. The land belt sloping to the coast with a width of 20 to 250 km is called Groot Randkant (Great Edge Step).

The Drakensberg Mountains run through the country from the northeast to the Lesotho enclave in the southeast, where they reach their highest point (3,482 m) with the Thabana Ntlenyana. South Africa’s highest mountain is the Njesuthi at 3,446 m. The Kalahari stretches northwest from Bloemfontein through Botswana to Namibia. At Cape Agulhas (port.: agulhas – needles), the extreme southern tip of the continent, the Atlantic and Indian Ocean meet, to the west of it is the Cape of Good Hope (Cape of Good Hope or Kaap van die Goeie Hoop).

Most rivers in South Africa originate in the Drakensberg Mountains and flow east towards the Indian Ocean. The longest river, the Oranje, with a length of 1,860 km, also rises in the Drakensberg Mountains, but flows to the west and flows into the Atlantic Ocean. The Augrabies Falls on the Oranje River in the northwest of the Gordoni District were discovered by Hendrik Wikar in 1778, are approximately 150 meters wide and 56 meters high. Other important rivers are the Limpopo, which flows into the Indian Ocean as a border river in the northeast after about 1,600 km, and the Vaal (1,251 km), a tributary of the Oranje. The water levels of these rivers fluctuate greatly.

South Africa also includes the Prince Edward Islands in the southern Indian Ocean. South Africa gave up its territorial claims in Antarctica and the whale bay in Namibia in 1994.

This map of population distribution in South Africa was created by the Worldmapper team. Densely populated areas appear bloated, the area of ​​sparsely populated areas is reduced. The shape of the grid has been preserved; an underlying map with the original geographical extent helps interpret the map. The distorted map should help to present abstract statistical information clearly. 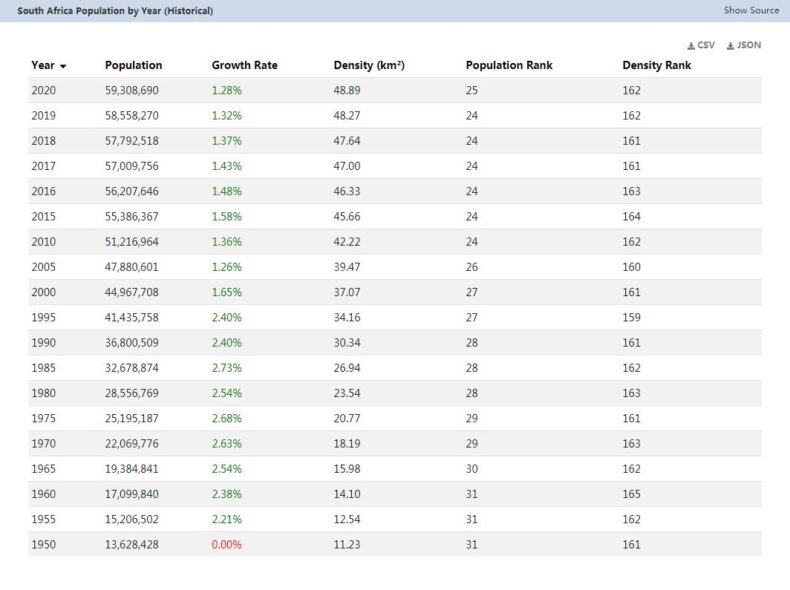