Mauritania is almost three times the size of the Federal Republic of Germany, but most of the country (47%) is made up of desert. Mauritania is the geographical link between Arab North Africa and Black Africa.

The charm of Mauritania consists of the coexistence of West African Cultureon the coast and Saharan Arab life in the desert. The traditional Moorish architecture is just as fascinating as the music forms in the country. The Art in Mauritania focuses contradict the teachings of Islam, especially in the ornamentation, as pictorial representations of nature and people.

The Banc d’Arguin National Park and the caravan cities of Quadane, Chinguetti, Tichitt and Qualata in the Sahara have been declared a World Heritage Site by UNESCO. Other highlights of Mauritania are the oasis town of Chinguetti and the camel market in Atar.

The population in Mauritania consists mainly of Arab and Black African parts, with the largest proportion of Arab-Berbian Moors and Black Moors. In addition, the black African peoples of the Fulbe, Soninke, Bambara and Wolof make up about 30 percent. Over 5,000 Europeans from different countries also live in Mauritania. This mixture also makes the culture of Mauritania so special. Although so many different cultural and interest groups live here, they manage to get along peacefully for the most part. The “soul of the nation” stands above all the differences, as the residents say.

Many Mauritanians are nomads, especially the Moors who roam the Sahara with their camels. The population groups that were Arabized are called Moors. Islam is also the central element in the life of the Moors, they see religion as a connection between the different ethnic groups in Mauritania.

Here is an up-to-date list of the largest cities in Mauritania.

Form of government: Mauritania has been a presidential republic since 1960, and this year the country gained its independence from France. The 1991 constitution is based on Islamic law (Sharia). Constitutional reform in June 2006. The bicameral parliament is made up of the National Assembly with 95 members and the Senate with 56 members (with 3 members from the Mauritanians abroad).

Colonel Maaouiya Ould Sid’Ahmed Taya (head of state since 1984) was Falled in a coup in 2005. Both chambers of parliament were initially dissolved and re-elected in November / December 2006 (National Assembly) and in January / February 2007 (Senate).

On August 6, 2008, the military putsch again against the President and Prime Minister.

Language: The official language in Mauritania is Arabic. French is a widely used commercial and educational language. The Mauritanians of Arabic or Berber descent speak the Arabic Hassaniya dialect. Wolof, Solinke and Pulaar are also spoken.

Religion: the official religion is Islam, to which almost all Mauritanians belong.

Local time: CET – 1 h.
In Mauritania there is no change between summer and winter time.
The time difference to Central Europe is -1 h in winter and -2 h in summer.

Mauritania borders Algeria, Mali, Western Sahara (Democratic Arab Republic of the Sahara) and Senegal. To the west is the Atlantic Ocean.

With more than a million square kilometers of land, Mauritania is one of the larger countries in Africa. The size of Mauritania roughly corresponds to that of France and Spain combined.

Here you can find a detailed topographic map of Mauritania.

The surface shape of Mauritania offers a fairly uniform picture. To the south (between the Senegal estuary and Cap Timiris) the flat coastline, in the north the bay and island-rich cliffs are joined by an extensive lowland, which with its sand dune fields forms the western edge of the Sahara. A short steep climb leads to the largely flat highlands (300-500 m) in the central part of the country. Here are the sandstone plateaus of Adrar, Tagant and Affollé. Due to erosion, some areas were so severely eroded that individual island mountains were formed (including the Kédia d’Idjil, the highest elevation in Mauritania at 915 m). There are several cities, small villages and oases in this region.

To the east, the plateaus, which are mostly covered by scree fields, sink to the drainless, sand-filled El Djouf basin.

Due to the drought, there is little vegetation in Mauritania. Around 40% of the country’s area is covered by dunes (Ergs), which move continuously in a southward direction as so-called traveling dunes with the northeast trade wind.

The only permanently water-bearing river in Mauritania is Senegal, which forms the state border with neighboring Senegal. This is the only region in the country that is covered with vegetation all year round.

This map of the population distribution in Mauritania was created by the Worldmapper team. Densely populated areas appear bloated, the area of ​​sparsely populated areas is reduced. The shape of the grid has been preserved; an underlying map with the original geographical extent helps interpret the map. The distorted map should help to present abstract statistical information clearly. 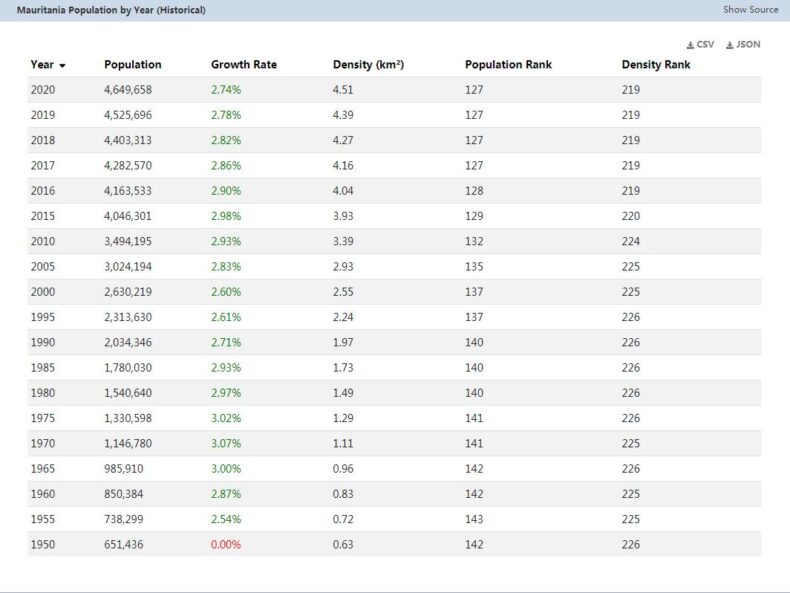 Passport: is generally required for travel to Mauritania, the passport must be valid for 6 months upon entry.

Transit: Transit travelers who fly to the next connection within 24 hours, have valid documents for the onward journey and do not leave the transit area do not need a transit visa for Mauritania.

Application: In person or by post at the consulate or the consular department of the embassy (see Mauritania – important addresses).

Business visa: additionally a company letter from the German company about the purpose and duration of the trip with a confirmation of the assumption of costs

Here you can download the visa application form for Mauritania.

Entry with children
Germany: Children need their own passport (child’s passport or electronic passport) to enter Mauritania.
Austria: own passport for children.

Vaccinations: Information on international vaccination certificates that are required for entry can be found in the chapter Mauritania – Health.